My Non-Textbook Taper has begun...sort of... 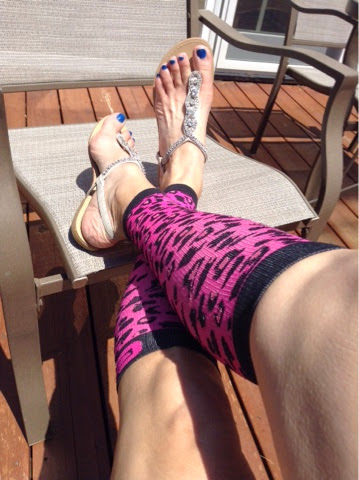 The IMT Des Moines Marathon is on the horizon. Officially, it is now less than three weeks away, which means my taper should be underway, right?

Well, if this was a perfect world (and I was a perfect runner with no injury or issues regarding running shoes), I would be embracing Taper Time.  But, things have NOT been so picture-perfect, therefore, my taper will not be either.  And I am quite alright with that.

This is my second go-round with marathon training. Other than running the majority of my long runs with a friend (her name is Barb, and this is her second marathon as well), the bulk of my 26.2 training has been on my own.  I am using a very similar plan as I did last year, but have taken the liberty to tweak it (somewhat) to better suit my lifestyle, race day goals and mental well-being.

Last year, I followed a Hal Higdon plan for "senior" runners (in other words, his plan was targeted towards experienced runners who had been running for several years and/or had completed several half marathons).  He recommended speed work once a week, but didn't enforce it.  This plan basically had me doing an optional speed session (of my choice) on Monday, running 4 miles on Tuesday, 6 miles on Thursday, then a long run on either Saturday or Sunday.  He also highly encouraged cross-training on the non-running days since this plan did not incorporate daily running. It worked like a dream.

This year, I am basically following the same plan, but am taking the speed work more seriously (in other words, I'm actually doing it consistently).  Every Monday, for the past few months, I have disciplined myself to do some form of speed work.  Some Mondays I have run Fartleks. Other times I have run hill intervals around the block. On occasion, I have also done some work on the local track. 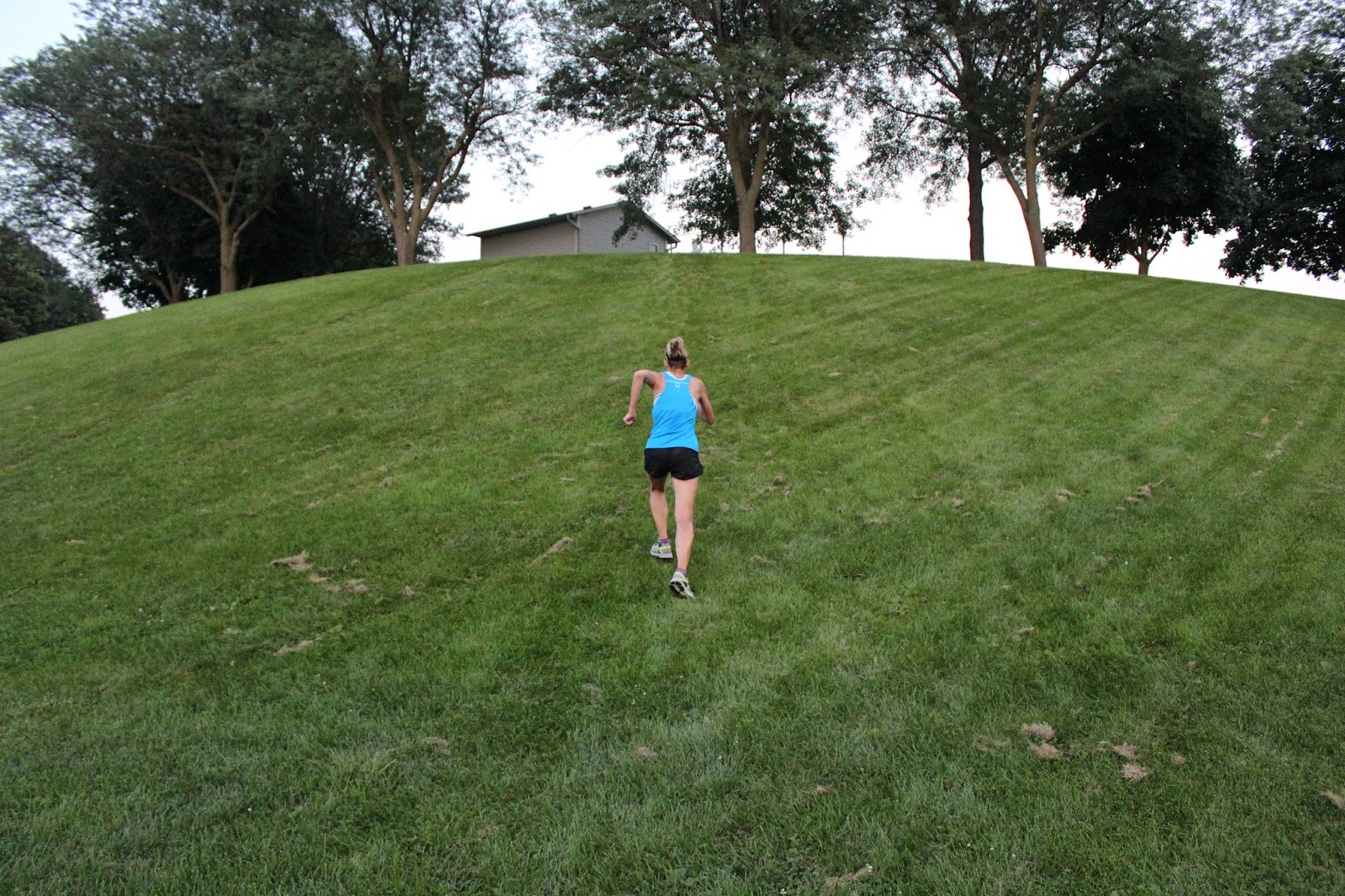 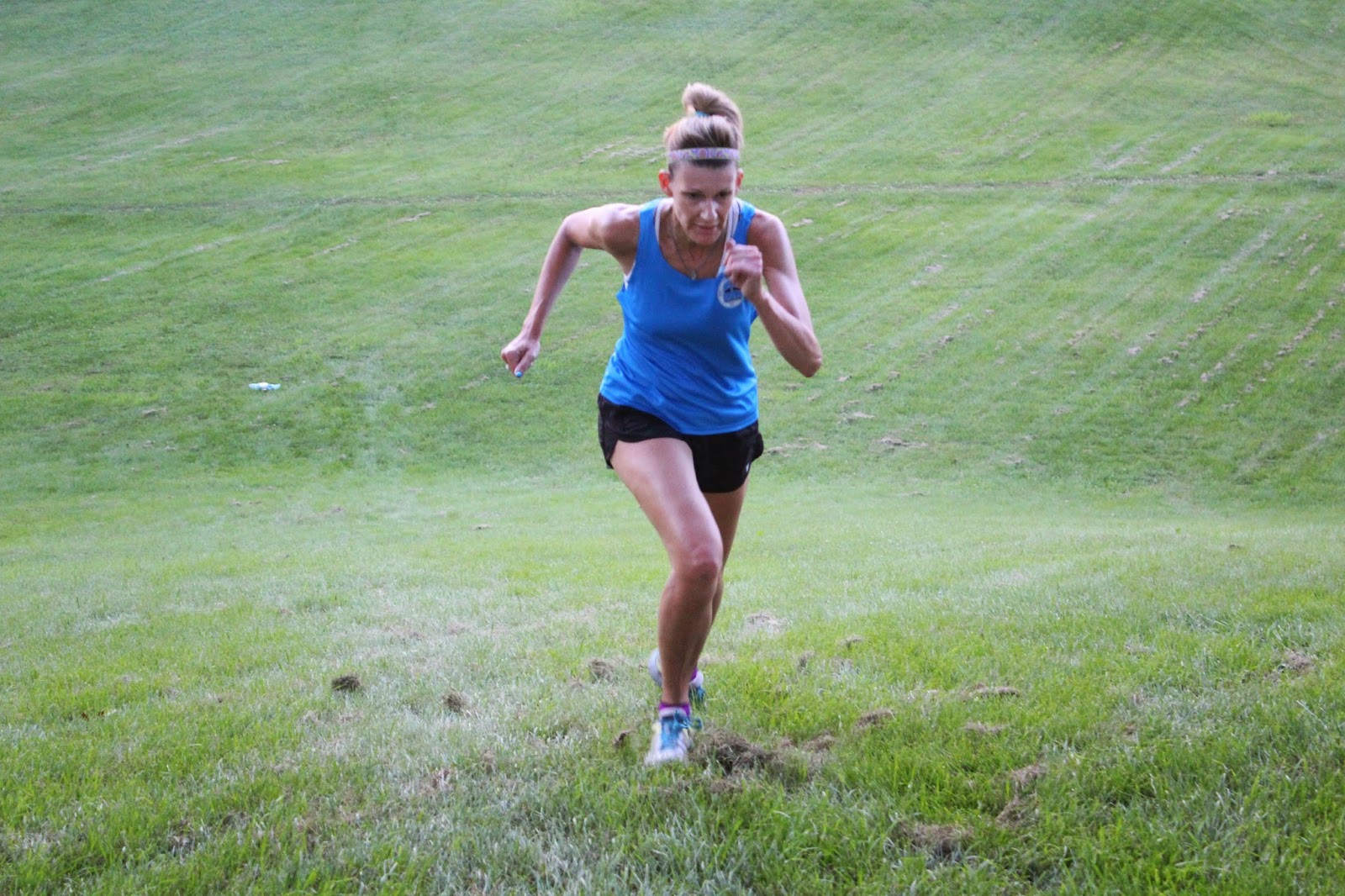 My favorite speed session, though, has been running hill sprints on a nearby sledding hill at our golf course. I do a one mile warmup run, usually 20 sets of sprinting up the hill (interspersed with 20 easy "jog-back-downs" to the bottom ), and end with an easy half-mile jog back home.  This whole workout is over and done in less than 30-35 minutes. Short but intense.  Even though I still have had a few battles with muscle stiffness (in the piriformis and glutes), I have had some decent finish times at races so I'm convinced this speed work has been a great addition to my overall running-fitness.

Another new thing I have done this training cycle is a recovery run the day following a long run.  Believe me, this is not anything pretty or picturesque.  I simply run a very easy mile at a very easy pace. I used to always take a full day off after a long run, but now I see the benefit of being in motion.  Ideally, I try to do this first thing in the morning, but, on occasion, I have done later it in the day depending on my schedule.

I also am utilizing compression socks and sleeves more effectively.  I don't usually wear them while running, but I do wear them (for recovery) after my long runs.  I put them on as soon as possible after showering (following my weekly long run), and wear them overnight.  I have noticed a substantial reduction in post-run leg and/or ankle swelling.

Now, for my taper.... I'm doing this differently as well.  Last year, being it was my first attempt at training for a marathon, I wanted to take it easy.  Some plans incorporate a couple of 20-mile runs prior to the taper, but my plan only had one.  This year, my marathon is a month later on the calendar, so I've had a lot more time to spread out the training over the summer.  I also have done a lot more distance events, so I have had several half marathons (and other races) to keep me busy all summer.

So, this year I planned to do two 20-milers, one would be about six weeks out from race day, and the other would be three weeks later...thus, I would have three solid weeks of tapering.  What I didn't plan on happening were ongoing issues with my glutes.  Upon seeking a second opinion form a different running store, I learned that the stability shoes I had been wearing for the past six years were not my best option.  I was told that I should be running in a neutral shoe instead.  I bought the neutral shoes and took them out for several runs.  They felt great on my feet, but the glutes were still not happy. I should add that this trial and error thing with the new shoes happened at a very inopportune time.....right before my first 20-miler.

With muscles still in recovery from a somewhat painful half marathon, I set out to break in the new shoes over the course of 20 miles.  The miles seemed to go slow, and my patience dwindled and my frustration multiplied.  After getting to the 15-mile mark, I decided to call it good.  I was disappointed to not get to that 20-mile mark, but I knew my body needed to stop.  I would not be doing myself any favors by pressing through five extra miles, and I could potentially do more damage than good.

The following week, I did my regular training routine in the new shoes.  They felt good, but not (yet) great.  I had a 10-mile race that next weekend, which went surprisingly well.  It took awhile for my muscles to loosen up and enjoy themselves, but I was very happy with my pace and my finish time was a 10-mile PR.  But I still had that nagging feeling in my gut, knowing that something just wasn't right.  Finally, I reached a landmark decision....as much as I liked the new shoes, my body really needed more than a few weeks (with unusually high mileage) to properly transition to them. They would return to their box (temporarily) until after the marathon, and I would rekindle my love with the Mizunos.  My body knew them well, and they had seen me through many races (including the Quad Cities Marathon a year ago).

What a weight lifted from my shoulders!  I was seriously having doubts about running 26.2 miles, and was contemplating transferring my registration to the half marathon. After all the miles I had put in over the summer, though, I was just not ready to call it quits.  This past weekend would have been my second 20-miler.  Given the fact that I'd spent the previous two weeks leap frogging between shoes, I decided to run 15-18 miles in the Mizunos. If all went well, that would seal the deal for marathon day.

Barb and I met up at 7:15AM and took off running.  We ran a different route, choosing to do one long  out-and-back (totaling 16.5 miles) rather than the usual multiple loops (5-6 miles each).  We'd get back to my house after the 16.5 miles and assess our situation (either call it good, or continue on for an additional mile or two)  Amazingly, my muscles started feeling great about three miles into the run (lately it had been taking about eight miles for that to happen).  We made it seven miles before stopping briefly for water. We continued on, and around mile 11 we took a quick walk break.  Around mile 13, we noticed the middle school was open (due to a volleyball tournament), so we detoured in there to use the restroom. We made it most of the way back without walking much.

We needed to make an appearance at a community breakfast, so we decided to take thirty minutes or so to do that, then we could head back out and get in a few more miles.  By this time, it was just after 10:30AM, and the temps were climbing and the sun was high in the sky. Sitting down to eat French toast felt good, but it was a little tough standing back up and walking to the car.  We got back to the house and decided to go a mile...we could then decide to head back or go farther.

That first mile (after the brief breakfast stop) felt very slow and sluggish.  Granted, on race day I will not be stopping for a 30-minute meal, but for a training run it was a true test for my legs.  Going the distance is not just about running that distance non-stop, but also about running on tired legs...legs that do not want to continue moving. We decided to press on and run two additional miles, finishing with a total of 19-1/2 miles.  Add in the half mile cool-down walk, and we finished 20 miles.  Not bad considering our goal was 15-18 miles.  Yes, there were a few intermittent walk breaks in those final miles; it had gotten hot and our bodies were tired. But my feet felt great, and (though tired) my legs felt great, too. My Mizunos did me proud!

So, what's next?  As mentioned, this taper is very non-textbook, and definitely not something I"d recommend for anyone else to attempt.  We have a friend  (who also will be running the IMT Des Moines Marathon) that wants to do a 20-mile run this next weekend. He wasn't able to join us last weekend, which is why we had originally planned to just run 15-18 miles.  We hadn't planned to do 20-miles last weekend because we knew we'd also be running 20 miles next weekend....but we had not done a "long" run in recent weeks.  We'd done the half marathon (Sept. 6th), then 15 miles (which was supposed to be 20 miles, but we stopped early...Sept. 13th), then the 10-mile race (Sept. 21st), so we wanted to at least run 15-18 miles, (and possibly a little further if we weren't too fatigued).

This next 20-miler will not be easy, and it definitely will not be fast. Although I feel pretty well recovered, I know I need to go easy this week so I have some energy stored for this weekend's run. Following the 20-miler this next weekend, I'll have two full weeks for my taper.  One less week than what I'd prefer, but I think it will work out if I stay healthy, get plenty of sleep and take it easy. Minimal miles and very light cross-training will also be paramount.