A Sneak Peak into my (non-running) Life 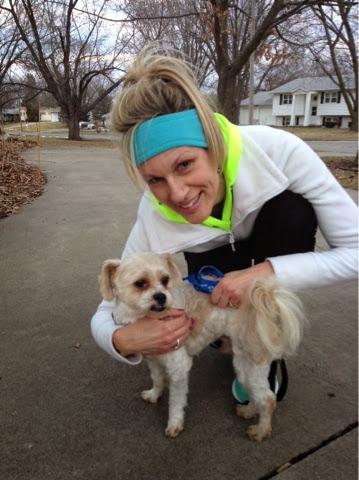 I blog about my experience(s) as a runner. A huge part of my life, though, is my family. Without their constant support and encouragement, my running would take a nose-dive.  Our family experienced a pretty substantial life-changing event this past weekend.....we became dog owners!

Having never had a canine in my household (as a child nor as an adult), this is pretty major for me and very exciting for the family. I have numerous allergies (believe it or not, I tested positive for 30 of 33 allergens at my most recent allergy screening), and my sense of smell is bionic. Those were my trump cards in avoiding the pet dog "band wagon."  I argued (with the husband's support) that just because most everyone we knew had a dog didn't mean that we needed to have one as well.

In recent months, though, our three kids finally succeeded in wearing us down. They all have allergies, too, though not as severe as their dear (old) mom. They took it upon themselves to research the possibilities of finding breeds of dogs that are low dander/non-shedding, many of which are claimed to be hypo-allergenic. Some of the breeds we researched were Shih Tzu, Maltese, and Bichon Frise (and mixes of these breeds).

My next argument was that if any dog were to enter the household, I'd want it to be a rescue dog.  I have  nothing against dog owners who seek out a breeder. I just felt in my heart that we needed to find a dog who was already in need of a home rather than adding another to the ever-increasing pet population.Well, they took that "trump card" and and practically played it against me.  They took turns monitoring the local shelter, awaiting the arrival of any dogs that would fit the ideal breed for us.

Finally, the day arrived. The local shelter had a dog that could be a possibility for us to consider. He was a  Shih-Tzu mix, approximately five years old and (drum roll....) house-broken. We paid him a visit, and fell (almost) instantly in love. He was very mild-mannered, and friendly. They recommended him as a great pet for "first-timers" (like us) because he was past the puppy stage and wouldn't require much work in terms of house-breaking (though potty accidents are always a possibility).  We filled out the paper work, and arranged for a second meet-up.

Since our local shelter is small, most of the smaller dogs (like this one) are fostered, they live in temporary "foster"homes with foster parents until a family adopts them. This was the case with the dog we were hoping to have. This also was right before the Christmas holidays, and the dog's foster parent was a college student who would be leaving town for several weeks during the winter break. Arrangements had already been made for the student to take the dog with her, to ensure the dog would remain under her care.

Well, to make a long (and somewhat painful) story short, the student's family fell in love with the dog. Since the student had been fostering the dog for a month prior, she had first dibs on adoption (which I agree with), but we had not been told that upfront (which was disappointing). When we received word that the dog would not be returning to town, it felt like the rug had been yanked out from under us. The kids were devastated, and it made me realize just how much I really wanted a dog after all.

Believe it or not, it felt like we'd lost a pet. There was a lot of grieving and numbness. Even though this dog had never entered our house, we'd already accepted it as a member of the family.

So, onward. We continued our search for another dog, hoping to find one in a surrounding town. On a whim, I sought out a shelter in a nearby town (45 miles away). As luck would have it, they had a couple pictures of Shih-Tzu mix dogs on their website. This was on a Friday night, and our son had a swim meet (in a town not too far from there) the next morning. A phone call confirmed the two dogs were still available, so we arranged to stop by the shelter on our way home from the swim meet.


When  we met Max, he instantly felt like "our" dog. He was friendly with a very sweet disposition. He had been surrendered by an elderly owner who was no longer able to care for him. We were told the owner was very concerned about Max's well-being, and wanted to make sure his new owners would take good care of him. The shelter volunteers were knowledgeable and accommodating, allowing us the opportunity to put a "reserve" on Max for the following weekend (since we didn't live in the city limits).  It was just my husband and myself, so we sent pictures of Max to the kids....who instantly gave us their approval.

They told us Max was already scheduled for a grooming appointment later in the week, and they could arrange to have his "surgery" on the same day (it's a state law that all dogs must be neutered or spayed prior to being released from a shelter). We filled out the paperwork, said our see-ya-soon's and we were on our way.

That was over a week ago. The following week was filled with nervous trepidation, and anxiety. Having had one failed adoption, it was really difficult to allow ourselves the luxury of thoroughly enjoying the excitement of adding Max to our family. Once bitten, twice shy.....so to speak (how's that for dog-talk?).

I emailed the shelter mid-week, to confirm everything was on track for the adoption. They responded quickly, and reassured me Max would be ready on Saturday and they were so excited for him to have a new home. Not sure how he would do in a new (and strange) home, we borrowed a kennel from a friend to have on standby...and bought a new collar (with a matching leash). And a few toys. And treats.

Our oldest daughter is away at college (an hour away), but eagerly came home for the weekend. I had a race on Saturday morning, and upon returning home found everyone waiting for me to jump in the car so we could make the drive to the shelter.I think all of us were excited, and a bit nervous, hoping this adoption would go through without any hangups, and that Max would be riding home with us.

When they brought Max out to greet us, I didn't recognize him. His hair was so much shorter!  He was so excited, though. He was jumping up and down, melting our hearts in those first few moments. We signed the final papers, got a goody bag (with information from the vet who had taken care of him), and snapped on his new collar and leash.

We'd brought along the kennel, but the kids took turns holding him on the car ride home .I took my turn holding him, too.

I have a feeling this is the beginning of a great adventure. 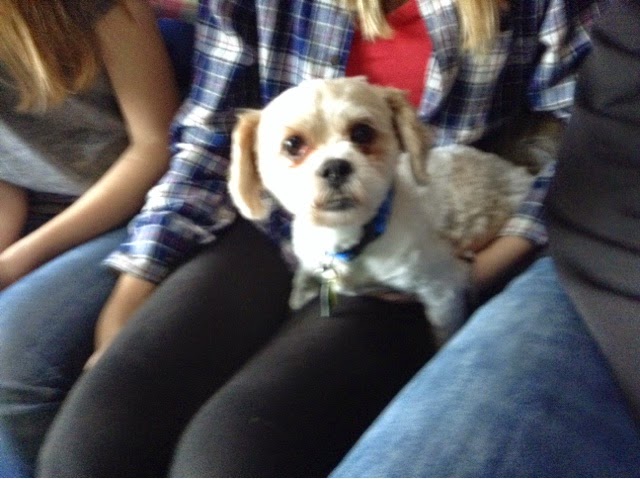 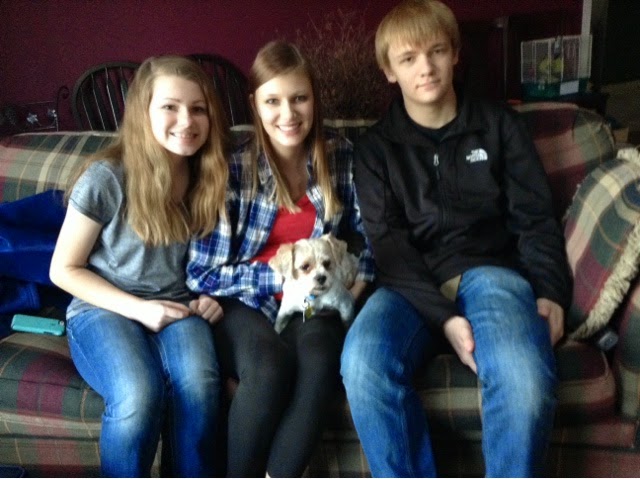 A few details about Max:
--He came with the name Max (but I gave him the "formal" name of Maxton McArthur)
--He is a Shih Tzu and Lhasa Apso mix
--He is five years old
--He can jump over the entire couch (not kidding!)
--He has a bit of a "cherry eye" on his right eye. Our vet assured us it's a very common condition, and a simple procedure to fix
--He goes nutzo when he sees you coming at him with his leash
--He has already figured out where we keep his treats
--Although he is a massive power-walker, his short legs probably won't allow him to be a running companion...and that's OK :-)

A few details about my allergies:
--I am allergic to almost everything outdoors but the sun, moon, and stars (grass, several different kinds of trees, pollen, ragweed, etc.)
--I am also allergic to indoor allergens (dust being the big one)
--I tested positive for dogs and cats (my cat "score" was off the charts... so I will never be a Crazy Old Cat Lady...and that's OK, too)
--I endured almost five years of weekly allergy shots (finishing the treatment in June of 2013)

Have you had a similar experience in seeking out a pet adoption? Did allergies play a part in your decision to adopt (or not to)?