Running in the red (flannel) 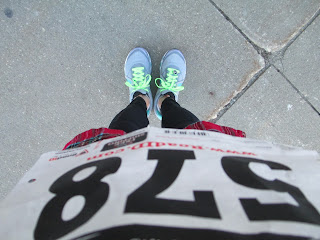 I am not a die-hard, serious racer.  I don't have the sprinting skills (and necessary genetics) to challenge the fast runners, but I have the endurance (stubborn ???) genes instead.  And that's all well and good.  I have learned to embrace what God has given me instead of mourning for what I don't possess
.

Even though I'm not your "run":of the mill race winner, I have a tendency to get frustrated with "event participants" (I hesitate to call them racers) who show up at races and act like they don't take running  seriously.  You've probably seen them.....all decked out in crazy costumes that are impossible to "run" in. 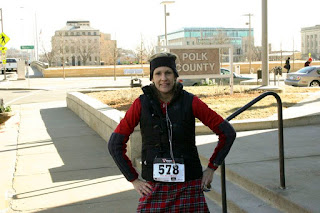 Granted, they are probably doing the race to have fun with their friends, but I struggle to understand the significance (or sense?) of spending money on a race that they aren't even trying to "run."

Anyways, that being said, there is one event I have run in (3 years and counting) that attracts a lot of crazy costumes.  And, this is one event I thoroughly enjoy, in spite of (or, maybe, because of) the costumes.  The Red Flannel Run attracted over 1500 participants this year.  Some ran and some 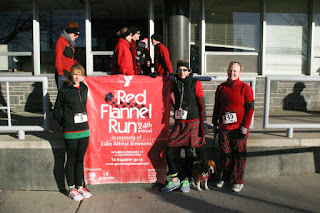 walked, there was the option of a  5Kor5-mile
distance.  And most of the participants were dressed in red flannel and, get ready for this, I was one of them

Let me remind you, I live in Iowa.  Most of the racing I do is in the extreme Iowa climate.  The first year (2011) I ran this race, the weather was pleasant for February.  There was sunshine and the temps were in the mid-30's, I believe (I have vague memories of splashing through a few puddles along the course).  Last year (2012), it really felt like a winter day in Iowa.  Cloudy, windy, near zero-degree temps.  Not pretty.  This year (February 16, 2013), it was around 18 degrees and sunny.  There was a little wind, but just having sunshine minimized the wind chill.

The Red Flannel Run takes place in downtown Des Moines, our state's capital city.  And, similar to a  lot other state capital buildings, ours is located on a significant hill.  This year, the race route had changed and included  a lap around the capital grounds.  At the beginning of the course, within the very first mile. O.U.C.H.


Personally, I do not love hills.  I know they are a necessary evil for runners, so I run on them occasionally.  Despite the effort, I absolutely love that very moment when you reach the crest of a hill, you can actually feel the terrain ease up underneath your feet. Even if I don't love the hill, I still love that sweet feeling of accomplishment.

So, as I was trudging up this hill, that evil little voice in my brain was trying to talk me into walking.  "It's just the first mile, you'll have 4 more miles to make up the time you'll lose by walking."  No, no, no, NO!  (Fortunately, I have another voice in my brain that also talks to me) "YOU are going to conquer this %$*&^  hill, and maybe even gain some adrenaline out of the effort.  YOU know can run and finish this hill."  So I did.

The next best thing to defeating a steep hill climb in your running shoes, is the downhill that immediately follows.  During the climb, I was working so hard to keep my stride that I could feel my body over-heating.  I momentarily questioned my choice in clothing, regretting that I'd worn a tried-and-true puffer vest instead of a jacket (that I could have shed and tied around my waist).  Upon cresting and then running downhill, I was reminded that I have run outside in cold weather numerous times.  I was reminded, again, that it was February in Iowa...and still a mere 18 degrees outside.  The puffer vest was a perfect choice after all.

The 2nd mile was a cold one.  Even though there was ample sunshine, we were running on the city streets, so we were in the shadows of all the buildings.  Despite the lack of sunshine on my face for most of the race, the air was much warmer than if it had been hidden behind clouds.  The 3rd mile was much better.  My body had reached that point where it was warmed up sufficiently, my stiff IT Band/Sciatic Nerve issue had loosened up and I could feel my pace starting to come alive. 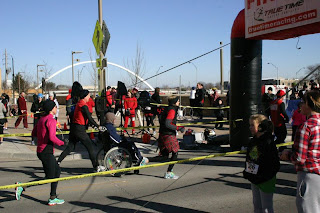 ile 4 felt great, as well.  This part of the course had an out and back leg. As I was just turning onto this leg, the lead runner went striding past me in a blur   He was only about 1.8 miles ahead of me.  Good for him. He was in a tank top and shorts (did I mention it was 18 degrees and February?), maybe he had a red flannel blanket waiting for him at the finish line. 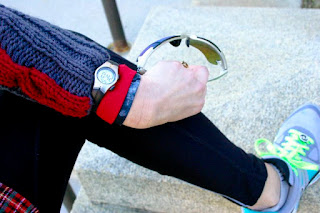 As I reached the turn-around, just into mile 5,  I could feel that much-awaited-for adrenaline taking over.  I could see the finish line in the distance and knew I would soon be there.  I checked my watch and saw that I'd managed to keep a decent pace, despite that treacherous hill and my stiff muscle issue.  I was able to "bring it" and  finish with a time of 42:55 (according to my watch).  I later learned my official finish time was 42:42...even better.

Every race (and most runs) come with lessons learned.  Bottom line, I am always reminded to trust myself.  I am not new at this.  I know how to dress for the weather.  I have conquered many hills.  If I have a stiff muscle, it will always loosen up as long as I keep moving.  And, it's fun to run in costume once in awhile.