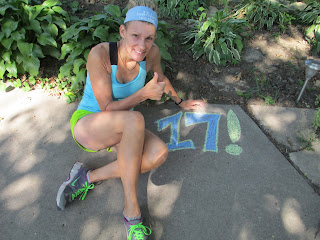 My big day is approaching, in 6 weeks.  Surprisingly, I don't feel nervous or worried...yet.

I was a little panic-stricken four weeks ago, though, following a tumble on a trail run.  The mishap left me with several messed up ribs and lots of discomfort for the first couple weeks.  I wasn't able to do my daily push-ups or planks, and rolling over in bed almost made me scream.  And sneezing or blowing my nose was absolutely worse than the labor pains of child birth.  Seriously, it was THAT bad.

Thankfully, though, I was able to run and continue to train for my marathon.  Despite the ongoing pain in my rib cage, my lung capacity did not seem affected.  There has been some discomfort when I pump my arms while running, and I think it may have slowed my pace slightly, but I have been able to stay on schedule with my long runs.

So, what have I been doing?

I found a program online, Senior Marathon Training Program by Hall Higdon.  No, not (necessarily) for senior citizens, but for advanced runners....runners who have been running for several years (therefore, having a solid  "established" running base) and also for those who have done half marathons (have trained for previous long distance events).  Perfect fit.  It was a 16-week training plan, but I modified it to make it more of an 18/19-week plan to allow for some flexibility.

This program is a great fit for me. It incorporates 3 or 4 days of running each week, and encourages rest days and cross-training on the non-running days.  I have never been a daily runner, so there is no way I could handle 16 weeks of constant running.  Basically, Tuesday has a 4-mile run, Thursday has a 6-mile run and Saturday (or Sunday) is the long run day.  I also have periodically done Fartleks (intervals of speed work) on some of the Mondays, and  I do strength work and/or yoga on most of the non-running days.  Some training plans have 5 or 6 days of running, also incorporating speed work and tempo runs.  Since this is my first full marathon, I do not have lofty goals of finishing with a super fast time.  Also, I am not a super fast runner...although I'd probably benefit from extra speed training , it would be foolish to think it would make a difference from "just finishing" and qualifying for Boston.  I want my first marathon to be all about the experience of being there, not stressing over a specific finish time.  Maybe I'll regret that decision on September 22nd, or maybe I'll be too proud of myself (for simply finishing the race) to care....I won't have that answer for another 6 weeks.  (Stay tuned)

I am happy with how things have worked out so far with my training.  I have been blessed with great weather, so most of my runs have been able to happen as scheduled.  Our family took a couple of weekend trips (on two consecutive weekends, none the less), so those long runs had to be tweaked a bit.  I managed to do a 10-mile run on the Friday morning (before work) prior to the first outing, and that went well.  Hoping for the good luck to continue, I attempted a 15-mile run on the following Thursday afternoon...and that did NOT go as I'd hoped.  The weather was hot, the cloud cover vanished at mile 4, and my body hit the proverbial "wall" at mile 10 (due to an inadequate lunch)...UGH!! I managed 2 more miles (with a lot of walking) before I waved the surrender flag.

Not all training runs (or races) will be great.  I have learned to take that in stride (no pun intended).  The bad runs keep us humble, and there is always something to learn from them.  Ten days later, I did my 15-mile run, and it went great.  That was the farthest I'd ever run, and I truly felt like I could have run farther.  A week later, I set out to conquer 17 miles, but was prepared to stop after 16 if I felt fatigued.  Again, the adrenaline kicked in and the endorphins carried me through the 17th mile.  Just a year ago, I ran a 20K (12.4 miles) and then did a half marathon a week later...and majorly bonked.  I was able to finish the half, but had to walk several times because I was still not completely recovered from the other race.  It is amazing to see how much my body has adapted in a couple months to the increased distance I'm pushing it to run.

The town where I live is pretty good-sized for Iowa, but very small compared to a metropolitan setting.  I have a great deal of envy for fellow marathoners-in-training who have an abundance of options for parks, trails and routes.  I have several routes (in various distances) that I am constantly mixing up (running a given route clock-wise one day, then running it in reverse the next time, etc.).  Or, I may elect to run the 7-mile loop first, then do the short 3-mile out and back before finishing with the mini-2-mile loop (sometimes in reverse, often  times not). It does get a little mundane seeing the same sights over and over, but this is where I live and this is what I have  to work with.

All of my training runs have been solo, too.  There are not too many local people willing (or crazy enough?) to accompany me on my long runs.  Yes, I have really gotten to know myself well from all the conversations in my head as I stride along.  I usually have music with me, though, so my witty (or not) sense of humor isn't always the main entertainment while I'm in my running shoes.

It works best for me to do my long runs on Saturday mornings, though occasionally I've done them at other times (as mentioned above).  Typically, I get up before 5:00AM and have some oatmeal and a chai latte' (my caffeine fix).  I spend a little time on the computer waiting for the food to digest, munch on some energy chews and have a little more water.  Ideally, I'm out the door by 6:00AM, though on occasion I may get distracted by something on the computer and my start time gets delayed (my bad).

I have tried carrying water with me, and it just is not my thing.  The constant "ka-ching, ka-ching" of the water sloshing in the bottle is very annoying.  I even tried a bottle with a collapsible liner, and that didn't help the problem.  Also, I don't like the "asymmetry" of having something in one hand and nothing in the other...it leaves me feeling out of balance or something.  Yeah, I'm a high-maintenance runner.  Since there are no porta-pots along the streets of my town, I usually run for 6-7 miles and loop back to my house anyways.  This gives me a chance for a pitstop (if needed) and a chance to grab a quick gulp of water and more energy chews or gel.

A lot of marathoners (probably most) would not endorse my running without water. Most of my long runs are early in the morning, though, so the summer heat has not been much of a problem.  Since I'm looping back to my house periodically, I have plenty of opportunity to hydrate and refuel.  Also, I know on race day there will be ample water stations along the route, so that detail is one I choose to not worry about.  When I do races, I have a mini fuel belt stocked with gels and chews so I have those on hand to use as needed.  This is what works for me, and has worked well over the years for the numerous half marathons I have successfully completed..

I have several pairs of shoes I rotate through for my training runs.  I have "older" shoes that I use for the shorter runs, they are broken in and SO comfortable I can't bring myself to part with them.  They are great for short runs, but I know I'd regret going any farther than 5-6 miles in them.  I have 2 other pairs of shoes I use for my longer runs.  One is a pair I've had for a year and have seen me through several races of  various distances, the other is a new pair I just acquired recently.  By using several pairs of old and new shoes, I get more life out of each pair.  If you wear the same pair of shoes for every run, they will break down a lot faster. Shoes need recovery time in between runs just like runners do.

So, six weeks to go.  It's exciting and (surprisingly) not too scary.  In less than 2 months I will be a marathoner.  It will be strange to go back to my "normal" way of life...running a few times a week and probably not going farther than 6 miles at a time.  I have three half marathons coming up this fall as well, one in a few weeks and the other two are after the full marathon.  I can't decide (or maybe my body will make that decision for me) if I'm going to go all out at these half marathons and try for a PR or just take it easy and enjoy the run.  I don't think every run should be a race.....we need to enjoy the experience and be thankful for being able to do so.