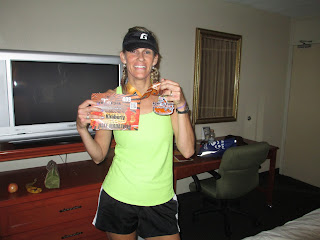 Having been running and training like crazy all summer, I was really excited to have "just" a half marathon to run this weekend.  This was my going to be my third Park to Park half, and I was eager to not only PR, but I was hoping to knock a good 5 minutes off of my previous finish time.  After all, I had just recently run 20 miles, 13.1 would be a cake walk.

We have had a recent heat wave across the midwest, and Iowa has been very hot and humid as a result.  We were lucky to get a few days reprieve, but the temps began creeping back up and by Friday the heat was back in the 90's, over 100 degrees with the heat index.  The Park to Park staff were diligent in keeping the participants notified, via Facebook and email, to use caution on race day.  We were urged to bring our own water, dress appropriately and, most of all, run wisely.  They even graciously offered runners the opportunity to transfer their registration to a shorter distance (5K or 10K) for free.

I really was not concerned about the heat or humidity.  I had trained in it all summer, and the race started at 7:30 in the morning.  The course is on several paths through a park (thus, the name Park to Park), so the course is flat and about 75% in the shade.  Also, I had run this race twice prior, so there would be no surprises or unknowns.  Perfect scenario.

Having run a 20-miler recently, I allowed myself a couple days to recover and then ran 6 miles on Monday (at a decent pace), and also ran a quick 3 miles Wednesday evening (also at a great pace).  I was ready and eager for the 13.1 at Park to Park.

Earlier in the week, I had been experiencing some bladder/kidney "issues," and finally went to the doctor on Wednesday.  All looked good, but she gave me an antibiotic as a precaution.  No big deal.

Saturday morning arrives, and I woke up to a strange feeling in the tummy.  Nothing major, but something was "off."  I had my ritual chai latte' and tried to choke down a bagel, but I had absolutely no appetite.  I drank some water and headed to the race.  I have been eating six energy chews prior to my long runs, but I could barely force four of them down. Nothing was tasting good, and I did not want anything else in my stomach.  I had a spare gel, so I grabbed that to have with me for later.

This race was over an hour away from my hometown, so I had driven there the night before and stayed in a hotel with a fellow runner friend, Barb.  There also were several other locals from our town who had driven up that morning, so we hung out with them while we waited for the race to start. 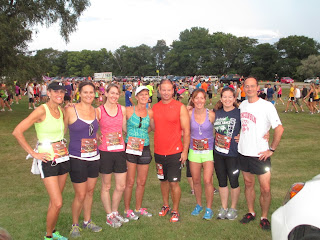 I don't usually get nervous prior to a race, but my stomach was really feeling strange.  I kept hoping another trip to the porta pot would solve the problem.....but nothing was helping.  Maybe things would settle after the race began.  Usually it takes 3-4 miles before I get in my zone, then all goes well.

The race started, I ran those first 3-4 miles, and still was not feeling much better.  I was grabbing water at every water station, and pausing briefly as I drank it.  I was keeping a 9-minute pace, but the groove had not yet started.  I kept pressing on.  I made it to mile 5 and decided to gulp down the gel a little early (I was planning to save it until mile 6 or 7).  Mile 6 came and I could feel my pace starting to slow, but I tried to shake it off and continue on. My watch showed 56 minutes since the start of the race, so I was still pretty much on pace.  Maybe the gel would kick in, and I could finally relax and coast to the finish line.

About a half mile later, I just had to walk for a bit.  Physically, I was in no pain but my energy level was at zero.  My stomach was still feeling funky, so I grabbed more water at the next station.  Off and running again, I made my way to the 8-mile mark.  Then the 9-mile mark.  More walking. More stomach stuff.  Water at the 10-mile mark.  More walking intervals. I also could feel a headache coming on.  I kept glancing at my watch and realized the sub-2 hour finish time would not be happening.  Neither would the PR (last year's time was 2:00:47).

Despite the struggle of staying in the game, I never once considered quitting.  I love running, and I love this race.  I also know that sometimes things happen that we can't control, and we just have to press on to the finish.  Since I had been walking so much, my calves were taking a beating.  Every time I tried to run, I could only get as far as 20-30 steps before the muscles seized up and almost made me scream.  I had to stop several times and stretch and massage them.  But I kept going.  It was a very hot and humid morning, but there also was a bit of a breeze.  It really could have been ideal running conditions had my stomach not been on fire or my energy completely gone.  I think I walked most of the final 2 miles because my calves kept cramping up when I attempted to run.

Eventually, I made it to the finish line.  My official time was 2:20:05.  I am at peace with that. Really, I am.  A lot of people finished much slower than myself, and the weather was a huge factor.  I know I can run this distance  20-25 minutes faster and have done so (more than once), this was just not one of those days.

I met up with all my friends, high-5'd the ones who had just completed their first official half marathon and things were good.  I grabbed some Gatorade and wiped all the gritty salt off of myself.  The idea of putting any food into my body almost made me gag, so I just drank instead.

So, what went wrong?   Well, hind sight is 20/20.  I know I should have eaten more for breakfast, I probably had a carb crash from lack of food.  But my stomach was feeling so funky, I had no appetite.  Although I had trained diligently in the heat of summer, it was a very humid day for this race.  I think I did a good job staying hydrated, prior to and during the race.  Upon getting back to my house, I read the printout from the pharmacy for the meds I'd been taking....two of the possible side-effects are loss of appetite and diarrhea.  SERIOUSLY? Why was that information in fine print?

Suddenly, everything made sense to me.  I had been taking these meds since Wednesday, and had noticed my stomach feeling a little off, but not enough to be concerned.  I noticed my weight had gone down a few pounds, but also not something I am usually concerned with since my weight fluctuates daily depending on my water consumption.  Thankfully, the diarrhea never made an appearance, but my stomach felt like it could explode at any moment while I was running. Also, I have learned that carb-loading is not a night-before-the-race thing, but needs to happen a few days prior to race day.  I probably had not eaten enough on Thursday or Friday, causing me to (almost) crash and burn. 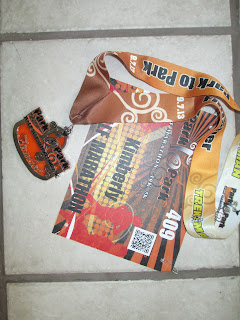 For the most part, I am laughing at my experience now.  I'm disappointed I didn't finish closer to my usual time of 2 hours, but I crossed the finish line on my feet. I had some severe (at the time) issues that slowed me down, but I did my best to not let them stop me.  And, I have one more dose remaining of these antibiotics...so they should be all out of my system in two weeks when I cross the start line of the Quad Cities Marathon.