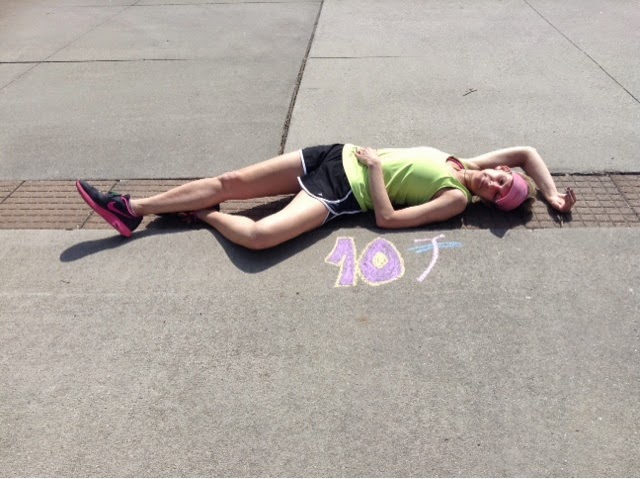 A huge part of me sharing my running "life" with the world is that I am going to be real about my journey.  I love all of my accomplishments, but these accomplishments wouldn't have much value without conquering obstacles along the way (and being reminded, repeatedly, that I am not any more special or talented than anyone else).

Case in point, I had a 10-mile run on my agenda for yesterday.  I have run many 10-milers in the past six years that I have considered myself a distance runner.  They are not difficult, but do require a little bit of forethought in terms of carb-loading, hydration and fueling.

Saturday morning arrives, and although I had been eating well and drinking plenty of water in the couple days prior.....I kind of over-looked those small (though very significant) details that morning.  It was cloudy, so I putzed around on the computer (procrastination at its best) and waited for the sunshine to emerge.  The temps were forecast to be in the 70's and I was eager to have a nice run in the beautiful spring weather. I took my time in getting the running clothes on, and had a quick bowl of oatmeal and glass of water before heading out (which wasn't until just after 11:00).

As I started on my run, I noticed my upper hamstrings were a bit stiff.  I had done a hill-repeat workout on Thursday evening; it wasn't a very long workout, but a bit intense.  These stiff muscles were probably a result of that, and I assumed they would loosen up after the first few miles (wrong!).  The first few miles drudged on, which is typical for me, so I just kept going, waiting for the magic to appear around mile 3 or 4, usually when all stiffness disappears and my body kicks into "robotic mode" and just goes on its own.

The sunshine was beautiful, but there was a strong wind coming out of the south.  Not gusts of wind, but continuous wind.  The wind was so powerful, I could feel it from every direction, even the cross wind was tough to battle against.  That's when it (finally) occurred to me that I probably should have eaten more than a bowl of oatmeal.  If I would have left the house a couple hours earlier, this wouldn't have been a problem, but waiting around until 11:00 with only a bowl of oatmeal in my stomach (and not much water) was pretty risky.

Around mile 4, I could feel the early signs of fatigue beginning.  I have done a few races where I have had major carb crashes, and I know what the early signs of that feel like.  Running 4 miles is not a big feat, but factoring in the wind made it much more of a challenge than normal.  I could feel my form starting to suffer, so I slowed down and walked briefly to catch my breath.  I continued on, finished mile 5, and walked a few times before finishing mile 6 at my house.

I went inside, and grabbed a granola bar and had some Nuun water.  I also ate a few fruit snacks.  I was surprised I made it back in less than an hour.  I didn't have my watch with me, so I had no idea what my pace was.  Apparently, I was running harder than I thought, since I was under a 10-minute pace even with the intermittent walking.  I grabbed a couple of Gu energy chews and headed back out.

Miles 7 and 8 went pretty smooth, although my hamstrings continued to feel a little tight.  Similar to the other times where I have carb crashed while running, my muscles didn't feel too much strain but my energy level took a nose dive.  I walked briefly before mile 9, then walked about the last half of mile 10.  Although my legs didn't feel tired, I could tell my form was a mess from the lack of energy, so I allowed myself to walk more than I really wanted to.  I was doing the Cancer Ends With Me 10-mile Challenge, a virtual run.  I had no one to impress but my ego, but  I was determined to do a solid 10 miles instead of just quitting after mile 6.

So, here's what I learned from this:
1--even if it's not a "real" race, food, fuel and hydration still need to be utilized as if it were
2--do not discount Momma N. Even though I love running in the heat of summer, the heat and humidity may appear as early as April and really catch you off guard after a cold winter
3--no matter how many times you have run a certain distance (like 10 miles, for example), respect the distance and do not take it for granted
4--Not every run or race will be ideal or fun.  Use the not-so-fun runs as valuable conquests on your journey to the next  great run, you will appreciate the victory much more in doing so.

I have a half marathon in two weeks, and I am ready.  I may or may not do a long run next weekend.  I really have nothing to gain by doing one, so I'll probably just do some moderate runs (5-7 miles) to keep things ready for race day on April 27th.  Life is Good!

Have you ever had a bad run followed by a great race?