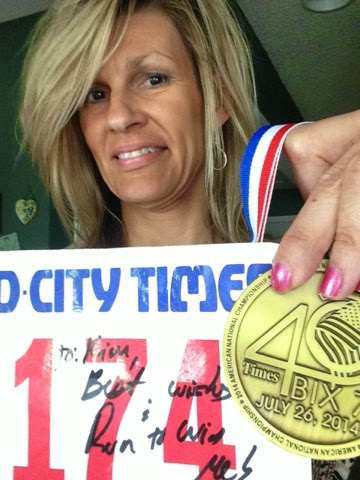 One of my favorite races is a pretty famous event, the Quad Cities Times Bix7.  I have run this race twice before (2009 & 2010), and was eager to return to Davenport, IA to conquer the seven miles of hills that make this event so popular.

I was in pretty good shape the last time I ran the Bix7 (in 2010) and I had never heard of a piriformis muscle or was aware that I even had one (actually, the human body has two, one on each side of the buttocks).  That all changed the past couple years. I now am aware of what a pain in the buttocks it is, literally. It has limited my range of motion, plateaued my speed, and often times has made a simple 5K feel like an Ironman.

That said, in recent months I have finally started to feel like I'm rallying back. I have had some decent races, great finish times and even a few PR's. It had been four years since I run the Bix7, and I was ready to do it again. I am not afraid of hills (nor the Iowa heat or humidity). I still had some apprehension for this race, though.  My piriformis doesn't like hills as much as I do, so I was hoping for the good but prepared for the not-so-good.

I was especially excited to run the Bix7 this year because Meb Keflezighi would be running it also. If you own running shoes, you probably know who Meb is; he recently won the Boston Marathon in April. On a more local level, though, he also is a two-time Bix7 champion.
Meb was one of the featured celebrities at the expo, along with Joan Benoit Samuelson (not only a Bix champion, but the first female Olympic marathon gold medalist) and Bill Rodgers (Bix champion and famous marathoner). I had the privilege of meeting all three of these running greats, and got their autographs. 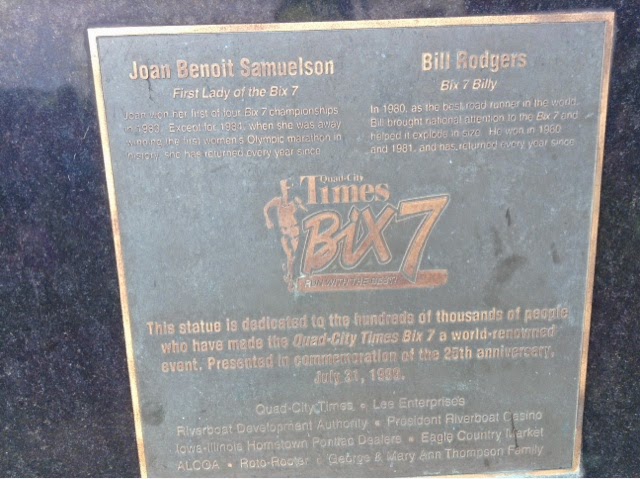 There were 10,782 runners who crossed the finish line this year!  It's incredible to think that many people are crazy enough (myself included) to show up for a 7-mile hilly race in the heat (and humidity) of July in Iowa.
There were different corrals, based on projected finish times) that the runners are assigned to. The course officials do a great job to ensure most runners get to their respective places. The streets are blocked off with fencing (real fencing, not just the plastic stuff) and temporary wooden tunnels along the sidewalks, making it difficult for runners to sneak into a faster corral (but it still happens).
It's breath-taking lining up, and seeing the mass of runners for several city blocks ahead of you.....anticipating that first hill. We heard a beautiful rendition of the National Anthem (which always gets me teary-eyed), followed by a flyover, and the gun fired.
The Bix7, now in its 40th year, is a challenging out-and-back course. The start line is at the bottom of the Brady Street hill, a climb that encompasses most of the first mile. The route then turns onto Kirkwood, and winds through a scenic neighborhood along a boulevard with a grass median.

This race is a great challenge. Whether you are a new runner, an accomplished marathoner, or just needing to see what you're made of, the Bix7 has something for everyone. The 7-mile distance provides it own unique nuance....it's not a "short" 5K, but not a long marathon either. You start out on a big hill, making it difficult to sprint (especially with the mass of runners who have not had a chance to spread out). The distance is short enough to run some-what fast, but long enough that you need to conserve your energy. Throw in the constant hills and you have the added challenge of gravity slowing you down or speeding you up, depending on which side of the hill(s) you are running. Either way, your legs take a beating from the two extremes.

This race course has tremendous crowd support throughout the entire seven miles. There are local bands, loud speakers, and plenty of cow bell (and an occasional sprinkler or garden hose).


As mentioned, the seven miles of the Bix7 involve constant hills. With the exception of a few city blocks right before the finish line, most of the route is on an incline. Also, the first half of the route has a gradual downward slope. Even though they are the same hills, the return trip presents a little more of a challenge than the first half because you are gradually working your way more sky-ward.

In general, I was very happy with my performance. I had a lot of frustration during the first mile, though. There seemed to be a lot of walkers in the middle of the crowded street rather than off to the side. There is a designated corral for walkers (towards the back of the line-up), so these were probably runners who were walking due to the difficulty of the hill, but they should have known better. Like any big race, though, it's very crowded at the start, and you have to do a lot of zig-zagging around each other.

Once I made the turn off of Brady Street and was on the boulevard, I was able to run on the grass median. Problem solved. I lost quite a bit of time on that first hill, but was able to make up some of it during the second mile since it was downhill and there were fewer runners to dodge.
My favorite part is the out-and-back aspect. This race attracts several elites, with an enticing payout for the top finishers. It is really exciting getting to see them as they make their way back from the turn-around, on their way to the finish line. I had my camera at the ready, and was able to capture Meb and the lead runners as they were approaching the 5-mile mark. 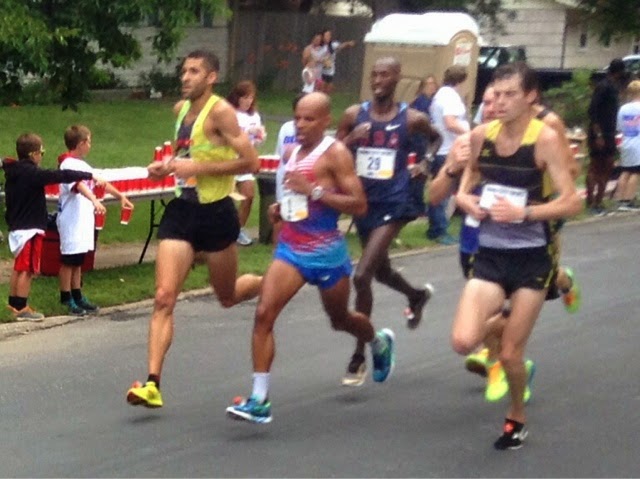 The water stations were great, several tables (with ample volunteers) on both sides of the street. Although I never felt thirsty or fatigued, I grabbed a water at each opportunity and walked briefly while I gulped a few sips (so as to not take a virtual shower with it).  The temps were in the mid-80's, with plenty of that good 'ole Iowa humidity. Although we had cloud cover for most of the race, I wanted to ensure I'd be well hydrated in case the sun broke through.

I made it to the turn-around with a steady 9-minute pace, gradually making up some of the lost time from the first mile. My legs felt great, my energy level never plummeted, even my piriformis was behaving.

The final hill, right before the Mile 6 mark, I believe is the most difficult of the entire race. This is the hill that gets you back to the top of Brady Street (which was the first hill of the race; rather lengthy and fairly steep). At this point of the race, my body was starting to feel a bit weary. I had just battled six miles of hills on a hot/humid July morning after all. Reaching that mile mark was euphoric, not only because there was just a mile between myself and the finish line, but it was all downhill from there!

I am not a natural-born sprinter, but I felt like one for that final mile (it's great what a little bit of gravity can do!). My long legs felt a surge of power as they carried me down that final hill. As I turned the corner and saw the finish line a few blocks in the distance, I glanced at my watch. I had a very good chance of PR'ing!

I kept on, probably with that silly "I'm loving this" smile on my face. I needed to finish faster than 1:05 (and some odd change) to claim a PR. I knew it was going to be close, so I gave it all I had to get to the finish line. My official finish time was 1:05:26! Without remembering my exact time from 2010, I didn't know if I'd beat it or come up short, but I felt great. Having run a strong race despite the heat, humidity, hills and the slow start, I was more than satisfied with my finish and with myself.

I later learned I missed my PR by 12 seconds. I was disappointed for a mere fleeting second, before remembering all the strife I've run through the past couple years with all the aches, pains, and setbacks from my piriformis issues. Finishing within 12 seconds of a PR (from a time when I was injury-free) is a pretty substantial victory, I'll take it.

My stats were decent: I placed 50th out of the 421 women in my age group, and was the 3,577th runner to cross the finish line out of the 10,782 who ran those seven miles of hills. After running the first mile at a 10:27 pace, I was happy to see my average pace wound up being 9:40....a reflection of how much time I was able to make up in the other six miles. All said, it was a great race and a great day! Meb told me to "run to win," and I believe I did.