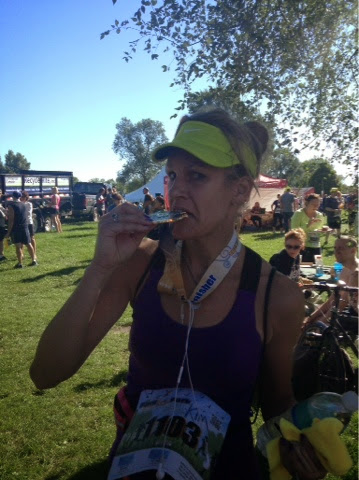 Park To Park Half Marathon. A chance for some Runner's Redemption. Did it happen? Sort of.....Let me explain.....

This is a fabulous event, and this was my fourth time running the half marathon (there's also a 5K and a relay team option, and in previous years there was also a 10K).  The course winds through George Wyth State Park in Waterloo, IA.  The trails are scenic with ample shade cover, and are moderately flat.  I have run this race with decent finish times (2:01:50 in 2011 and 2:00:47 in 2012), and last year, due to some unforeseen circumstances (side effects from recent medication), I ran it in 2:20:05 (ugh!).  That sub 2-hour finish has eluded me at this event, so I was hoping to (finally) claim my P2P sub-2 and redeem myself from last year's horrific performance.

The temps were absolutely perfect....chilly prior to the start of the race (mid-50's), but comfortable after the gun.  There was plenty of sunshine, but the majority of this race takes place under trees, so the heat from the sun was not an issue.  I had stayed overnight at a hotel (with my friend, Barb), so my wake-up call wasn't any earlier than normal. I felt well-rested. I even had brought along my usual cranberry oatmeal and chai latte, so my breakfast was exactly like it would have been at my own kitchen table. Perfect race day scenario.

Parking is the only drawback for this event.  There is plenty of parking space available, but the drive into the park is a couple miles along a very narrow road, and the traffic along this entrance is bumper-to-bumper. Fortunately, the organizers and volunteers do a great job in getting all the vehicles in place.  This year, they even offered valet parking for participants who biked in!
Although I had hopes of nailing a PR, I also knew it would take some effort and focus on my part.  I have had some great races over the summer, but recently I have had some issues with tightness and muscle strain  in the glute area.  Similar to the on-going piriformis stuff, after the first 3-4 miles everything is loosened up and I can be on my merry (running) way. Usually.

The gun fired, and we were off and running.  Within the first mile (believe it or not), I had that feeling that I needed to go to the bathroom. (seriously? already?) (ugh!). Actually, another downside to this race is the lack of potra pots on the race course.  There are plenty of them at the start (and later at the finish), but a very limited number of them in between. Due to the lay of the trails, I assume it's too difficult to have them brought in for every water station.

Also, within that first mile, my glutes were already on fire (in a painful way), and something was feeling funky in my left hip flexor. Knowing it was too early to panic, and knowing the first few miles almost always have some muscle stiffness, I upped the volume of my music and pressed on.  The first mile went relatively fast (for a first mile). According to my watch, I was running just over a 9-minute pace.  It didn't feel that fast, but I knew I'd need to slow down.  I don't mind a 9-minute pace, like after the 5-mile mark, but know it isn't wise for me to start out that fast.

The second and third mile were similar, though slightly slower. Still some glute pain and hip flexor discomfort. I just kept moving, trying to enjoy the beautiful scenery and trying to not think about my glutes or hip flexor (or the impending potty stop as soon as I spotted a porta pot).  Some of the early miles of this race go through a camp site, so it's always fun seeing the people in their lawn chairs (most of them cheering and waving to the crazy runners) as they cook their breakfast on the campfire (bacon smells especially delish at 8:00AM on a chilly morning, just saying).

It was around the 5-mile mark that Barb caught up with me.  She had lined up behind me, in hopes of not going out too fast, but she was having a great morning and keeping a strong pace.  She told me that a friend of ours from town had a daughter running, and would be around the 5-mile water station. Excellent!  It's always great seeing a familiar face in the crowd!

As we searched the spectators for our friend, Dodi, I also was scanning the scene for a porta pot.  I hated to pull over, but I knew there was no way I was going to make it another 8+miles without a quick stop. We saw the water station up ahead, so I grabbed a gel & slurped it down. I grabbed a water cup and told Barb to go on without me, I needed to use the porta pot and didn't know when I'd see another.

There were only two porta pots, and a guy was already waiting.  It was at least an entire minute (or more) before someone came out.  He took the open one, and I continued to wait.  Forever. And a day.  Honestly, was this other person taking a bath in there? Finally, the occupant came out and I ran in before someone else could cut me in line (yes, that has happened).

Finally, I was back on the trail, approaching the 6-mile mark when I spotted Dodi.  She took my picture, and grabbed my waist-tied shirt from earlier, and I pressed on.  I didn't pause my watch, and forgot to glance at the time when I pulled over for the potty stop.  I estimated that it was at least a 2-3 minute delay.  And I hadn't realized it, but my glutes were feeling better!  Well, they were still a little sore, but the stiffness had diminished.  My left hip flexor was still hurting, though the pain was more intermittent and not constant anymore.

Mile seven came and went, I think my pace was still around 9:30, but with the extra minutes tacked on from the potty stop it was difficult to know for sure.  When I reached the 8-mile mark, suddenly I felt like I was flying.  Effortlessly. The runner's high was kicking in, and I truly felt great (despite the on-going hip flexor issues).  I didn't count how many, but I passed a lot of racers in that mile. I also saw Dodi again! Mile 9 felt great as well.

I kept glancing at my watch, trying to calculate how much time had elapsed between the mile marks, to get an idea as to whether or not I could still potentially run a sub-2. It was not looking good. Even though I was feeling great (energy-wise) and I had picked up my pace substantially, it didn't look like I was going to be able to make up the delayed time from the potty stop.

I reached the 10 mile mark and my watch showed 1:38.  I knew I would not be able to crank out 3.1 miles in 22 minutes, so I decided, "so what?"  Park to Park is one of my favorite races, and I still could keep my  pace consistent and enjoy the experience.

My mind kept flashing back to a year ago.  I had been on an antibiotic a few days prior to race day, and apparently had not been eating properly (or enough).  The morning of the 2013 race, I had zero appetite and my stomach felt very "off."  I've never had diarrhea during a race before, but I felt like crap (no pun intended) the entire 2:20:05 of that race. Fortunately, the diarrhea never made an appearance, but it was stressful running 13.1 miles in a forest with no porta pots in sight.  My energy level was non-existent as well, and the temps that morning were in the 90's and the humidity was high.  I allowed myself to walk a great deal in the final miles because I was so wiped out, and that caused  my calves to start cramping.  It wasn't until I had returned home and actually read the fine print on the medicine bottle that I saw where two of the side effects of the medication were loss of appetite and diarrhea.  I can laugh about it now, and actually smiled as I remembered that frustrating morning a year ago.  This race was a completely different experience, and I was thankful.

My hip flexor continued to hurt, but the final miles went well.  I did have a few weird twinges on my right leg, and my right calf was starting to cramp slightly.  I never felt like walking (except for the mandatory 5-6 steps as I drank at the water stations), and I knew it was best to keep moving or the cramping would escalate.

I made it across the finish line, with an official time of 2:06:09.  Although it was frustrating to have lost several minutes from the potty stop, I still am satisfied with how the race went for me.  Barb finished four minutes ahead of me, so that's probably at least four minutes I can subtract off of my time.  The first few miles felt slow due to the muscle stiffness, and I had hip flexor discomfort for pretty much the entire race, so I am OK with how the day played out.  Over all, this race went well and I felt great.  Redemption?  I believe so.