Calling myself a Marathoner 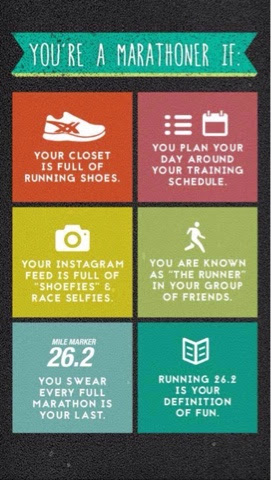 When does one officially call oneself a Marathoner?

Like most marathoners-in-training, I spent several months faithfully (though, at times, begrudgingly) logging miles while training for my first marathon (Quad Cities Marathon, September 22, 2013). As I was running that race, the thought crossed my mind...."Can I call myself a marathoner now?  As I'm RUNNING my marathon?  Or do I wait until I cross the finish line before that title will be bestowed upon my honor?"  After all, I had been told (and seen it in print) that the training was really the hardest part of a marathon; the race itself was merely 26.2 miles in celebration of having finished the training.

I was blessed to have a great "first-ever" marathon experience. The weather was perfect. I managed my hydration and fueling with near perfection. No hitting the proverbial Wall at mile 20. Although I did walk a few times in the final miles, I never once felt any remorse in dong so.  I made it across the finish line and felt like a champion.  I even had the honor of meeting the race director, and he shook my hand and congratulated me. He might have even called me a marathoner.....

In the days following that epic experience, I tried calling myself a marathoner...but it felt strange, like I was a poser in an exclusive members-only club.  Although I had, indeed, completed all 26.2 miles, I knew many other runners who had done more than one marathon. It seemed awkward to allow myself a title that was shared with others who had done so much more.

Fast forward to nine months later, and I found myself (secretly) yearning to do it all over again.  Only this time I'd do a different marathon, in a different city.  I did all the training (again), and made it to the start line of the IMT Des Moines Marathon (October 19, 2014).  Although I had a very different race course to conquer, it still was a very similar experience. Despite a few aches and pains (and some head-on battles with the wind), I thoroughly enjoyed my second marathon, too. I even finished it slightly faster than the other one.  Two marathons done. I'm officially a marathoner, right?

Well, let's break this down... 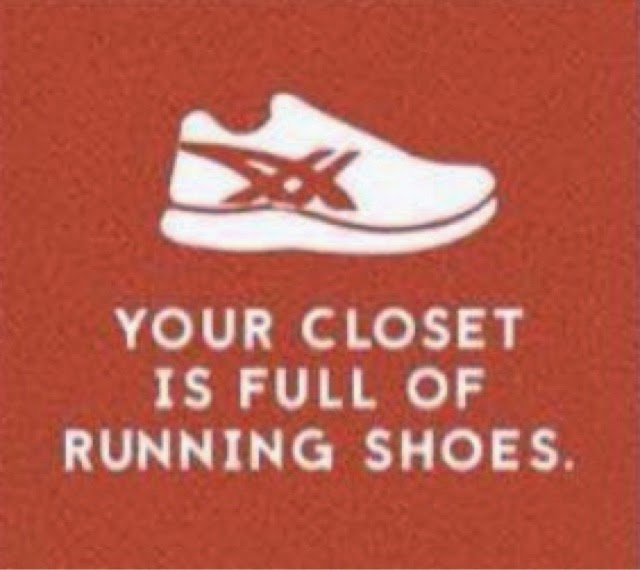 I own several pairs of running shoes, but my closet is definitely filled with other shoes as well.  I live in sandals when it's warm, and boots when it's cold.  I seldom don the running kicks unless I'm headed out for an actual run or a race.  I keep a few pairs of "old" running shoes in rotation with the "new" shoes (and wear them for shorter runs). Eventually, pair-by-pair, the old shoes get donated to charity shoe drives. 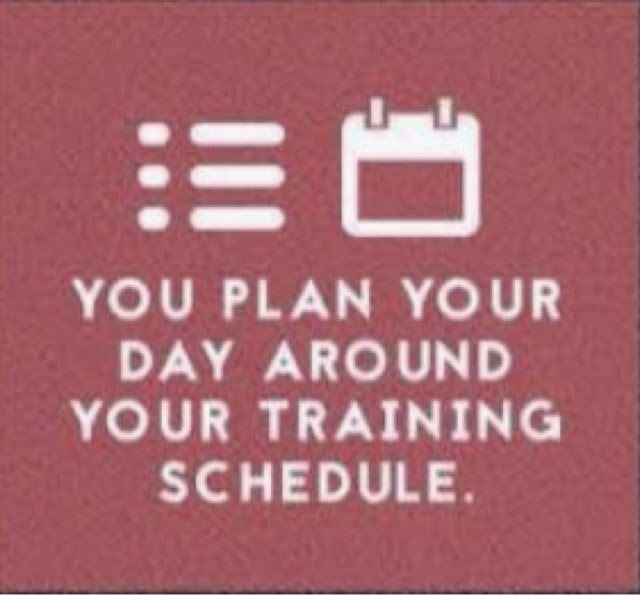 Quite the contrary, I plan my training around my family.  Do I sometimes have before-the-break-of-dawn runs? Yes, and occasionally there may be a run (or several) that do not happen due to other things on my calendar.  Life goes on. Missing a run now and then will not hinder my overall fitness, and I refuse to obsess over it. 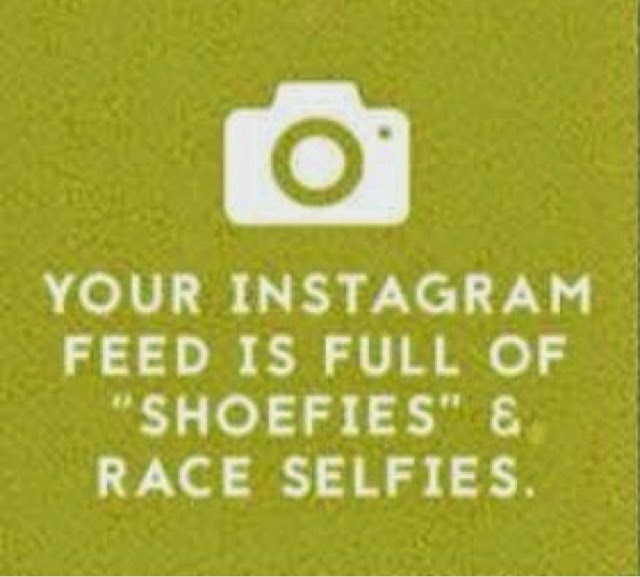 Well, I'm not on Instagram. But I am on Pinterest and Twitter, and I manage a running page on Facebook...all of which are overflowing with running-related goodies (in my opinion).  My goal is not to impress my followers, but to inspire them to violate their comfort zones.  Heck, if I can do this running thing, I believe most anyone else can do it, too. 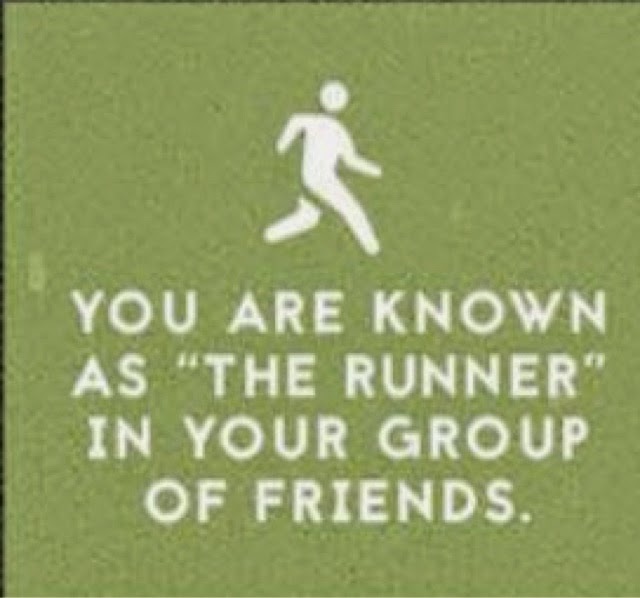 I have a lot of friends who are runners, but the majority of my friends are not. If they ask about my latest race or what event is next on my calendar, I will gleefully share every detail (significant or not) about my training or latest long run.  But I am mindful to not talk (much) running with them. Unlike the grandmother who thinks her grand kids are the epitome of perfection, I respect that most of my non-running friends will not enjoy "running talk" as much as me.  Really, I'm OK with that. My friends know I'm a runner and do not need reminding. 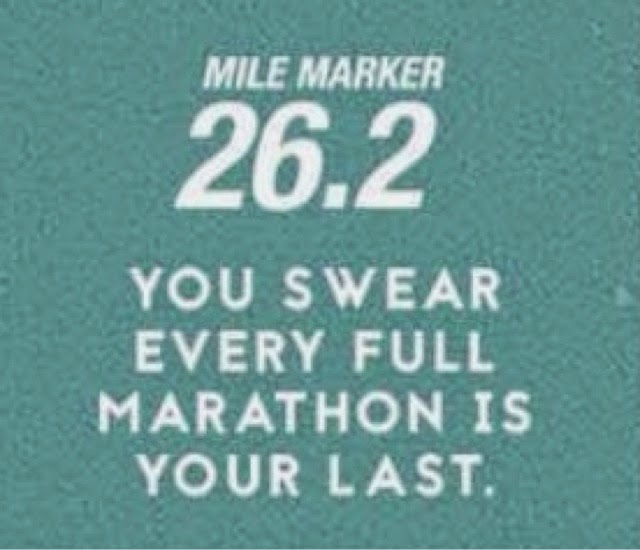 I believed this to be true (for both of my marathons), until I was running the actual races on their given race days.  Being on the course with the other marathoners and  marathoners-to-be is breath-taking.  Granted, I had a very similar camaraderie with half-marathoners, but running a full marathon really is a whole new beast.  A half marathon is a substantial distance, but some especially gifted athletes are able to run 13.1 miles without investing in a lot of extra training.  Not so with the marathon....most everyone hoping to finish 26.2 miles will need to commit to several months of extensive training to go the distance, as well as consistent speed work if they have hopes of potentially qualifying for a major race (Hello? Ever heard of Boston?).

Both of my marathons left me feeling ever-so-thankful as I crossed the finish line (because my body had truly proved itself and was exhausted), but within days (not weeks), I already knew my first marathon was not going to be a once-and-done deal for me.  As much as I tried to ignore that nagging feeling of training for another marathon, I knew I'd regret not doing it. 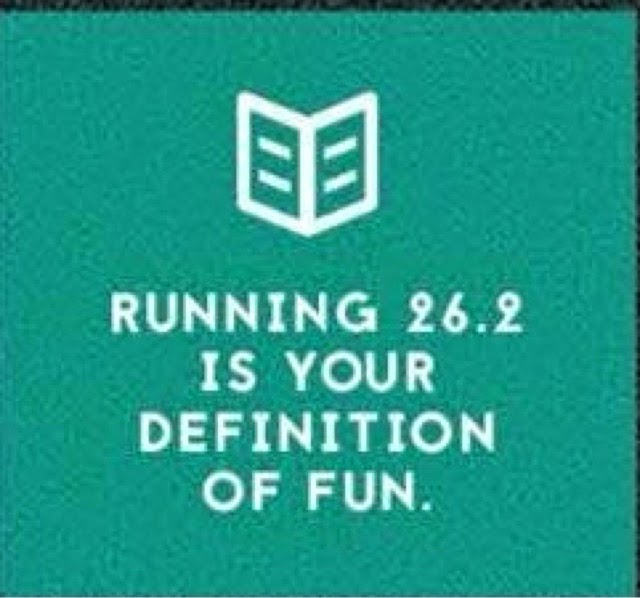 Believe it or not, running a marathon really was a fun experience for me, both times.  I have been blessed with two great marathons.....I had perfect weather, great crowd support, proper fuel, and an attitude of enjoying the race (and not obsessing over splits, pace or speed).  Not everyone is as fortunate, and I am grateful for everything that came together on both of my race days to make me want to do it all over again.

So, I guess that makes me a marathoner. It's probably time I acted like one, huh. There's a fine line between being proud and being boastful, bear with me as I figure this out.

How long did it take for you to call yourself a Marathoner?  Once and done? If you've done more than one, what made you want to do it again?
Posted by Kim at Running on the Fly at 6:35 AM