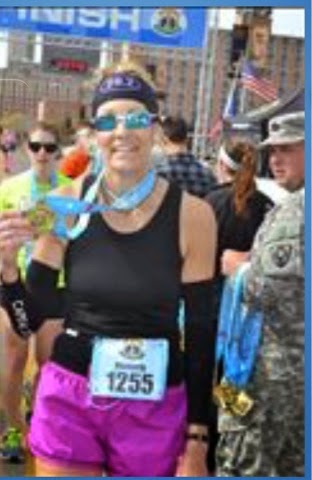 Some events are better than others, but some just stand out as the Most Favorite. I've been running for almost 10 years. In that time, I have done a pretty colorful mix of race distances, locations, and variety of events.

These events stand out as significant for various reasons, and are listed in no particular order. Here's my Top 10 (as of this moment in time):

1. Dam to Dam-May 2008 (20K). This was my first-ever "big race." I had never run farther than a 5K, and it took me several months to get up the courage to register for this one. I had to walk a few times, but finished in 2:07....and felt like such a champion. I've gone back and done this race every year since. In 2014, it changed to a 13.1 and probably will always be my favorite event. Forever. 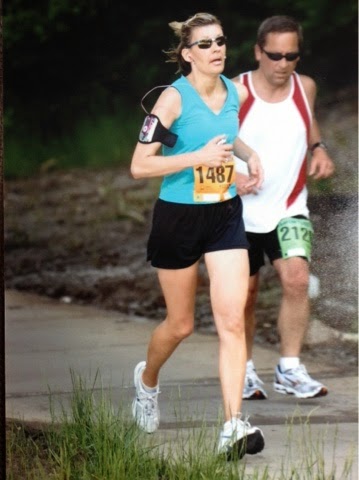 2. IMT Des Moines Half Marathon-October 2008. This race is also pretty high on my list of favorites. Other than a few quick steps through the water stations, I was able to run the entire race without needing any walk breaks. My husband was there at the finish line, and somehow he coerced the three kids to join him (they would have much preferred to stay in their warm beds at the hotel). I finished in 2:05, and was very pleased to have been bitten by the "distance race" bug. 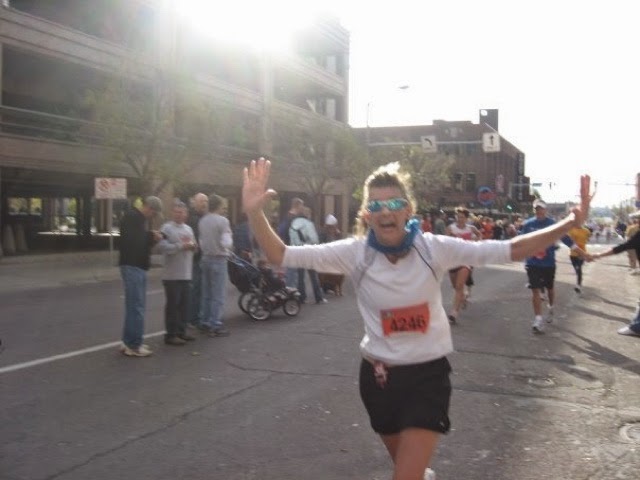 3. Quad Cities Marathon-September 2013. This was my first-ever 26.2, and I was blessed with a perfect experience. Awesome weather. Fabulous crowd support. The husband (and other family members) along the course and at the finish line. I also met a gentleman at mile 25, who caught me walking and offered to "run me in." Upon chatting with him, I learned he had run every Quad Cities Marathon prior (this was his 16th), and he kept telling the crowd ,"This is KIM! And this is her first marathon!"  Seriously, how many first-time marathoners get that kind of an experience on their way to the finish line? 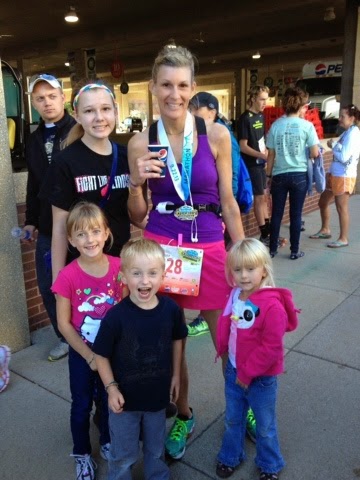 4. The Quad Cities Times Bix-7-July 2014. This was my third time running the seven miles of hills (in the July heat) that make this race so famous. I had the privilege of meeting Meb Keflezighi at the expo (and had his autograph on my bib for mojo). I didn't PR, but I came within a few seconds...a major feat for someone who has battled piriformis issues in recent years (and didn't have these aches & pains when I ran the race in previous years). 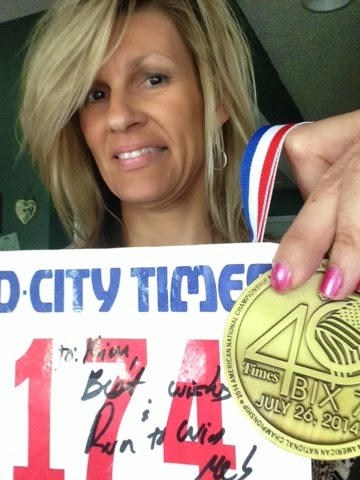 5. Rock'N Roll Half Marathon-St. Louis-October 2013. This race was a first for several things. It was my first Rock'N Roll event. My first race in St. Louis (subsequently during the World Series). My first-ever race run while chatting non-stop with a friend (Fran, a gal I had met through my Facebook page). It was a challenging race in that there were constant rolling hills, but Fran and I managed a 2:07 finish time...even with our non-stop talking and laughing (and a few pit stops along the route). 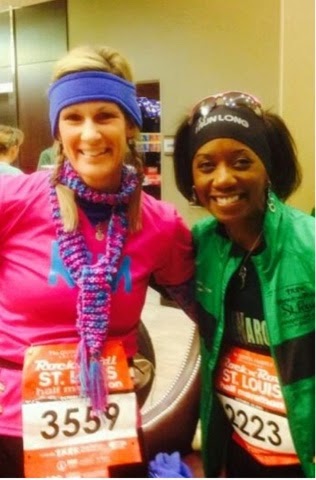 6. Rock'N Roll ReMix Festival-Chicago-July 2014. This was not just one race, but two. I met up with another wonderful friend, Penny, and we ran the 5K on Saturday and the 13.1 on Sunday. We also got to meet Shalane Flanagan (but we weren't able to keep up with her pace). Although the weather was very hot and humid, and there was some discrepancy on the course distance, it was a scenic tour through the beautiful downtown streets of Chicago....what runner wouldn't love that kind of scenic tour with a favorite friend? 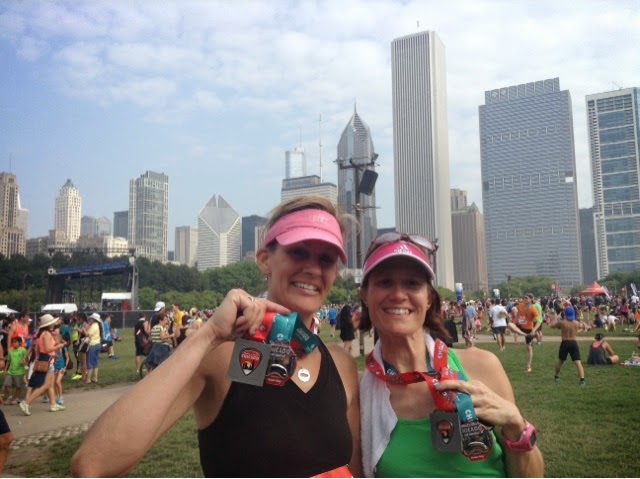 7. Fight for Air Climb-Chicago-March 2014. I am a huge advocate for fresh air and healthy lungs. I'm also a huge advocate for all things fitness (not just running), so this event is very dear to me. I have done the Des Moines event twice (and am registered for my third DSM Climb on March 22nd), but the Chicago Climb was a beast! We climbed the four Presidential Towers, for a total of 180 flights of stairs. It was oh-so-tough, but oh-so-fulfilling to reach the top of the final tower. This event is a national event in various cities, with all proceeds benefiting the American Lung Association. 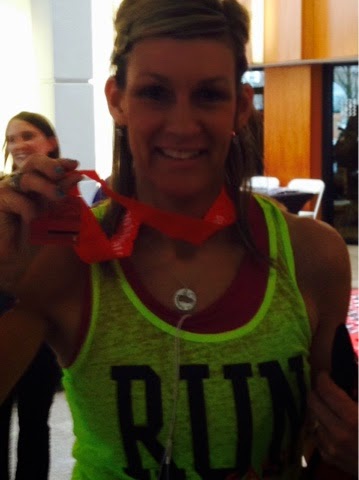 8. IMT Des Moines Marathon-October 2014. I have run the half marathon four times, but in 2014 I took on the challenge of doing the full marathon. What an amazing event!  Again, I was blessed with fabulous weather, amazing crowd support and the husband and family at the finish line (and also a few friends along the route). This course was tougher than the Quad Cities Marathon with several hills along the route, and although there was ample sunshine and warm temps, there was substantial wind in the final 5-6 miles. But, I managed a slight PR (can you say, "7 seconds?") despite the extra work it took to get to the finish line. Finishing this race made me feel like a legit marathoner. 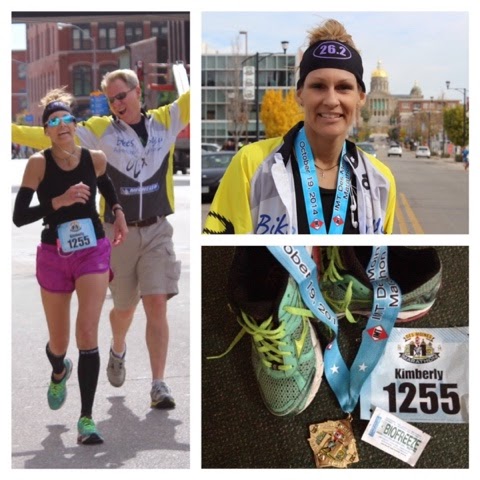 9. AIB Jingle Jog-December 2010 (4 Miles). This involved a couple loops around a lake in the cold of winter, in the beautiful sun with a dusting of snow. And I placed first in my age group!  I had never placed in the top three in any race, so getting the first place medal was especially sweet. I have run this race every year since, and placed in the top three (the race was cancelled in 2014). 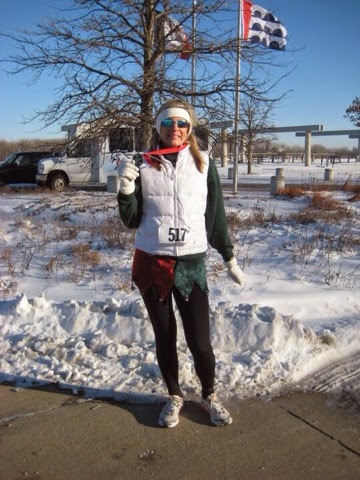 10. Hy-Vee Triathlon-September 2012. I participated on a relay team (as the runner, go figure). Our team finished in the top 30 out of 130 (or so) teams. Being the runner, I had plenty of time before it was my turn to get passed the baton (so to speak), so I got to watch lots of other triathletes while I waited. Wow. I saw athletes of every size, shape, and speed go whizzing by the stands on their bikes. It really hit home the value in accomplishing a goal. Most of these people were not competing in hopes of winning, but they had the same finish line to cross. 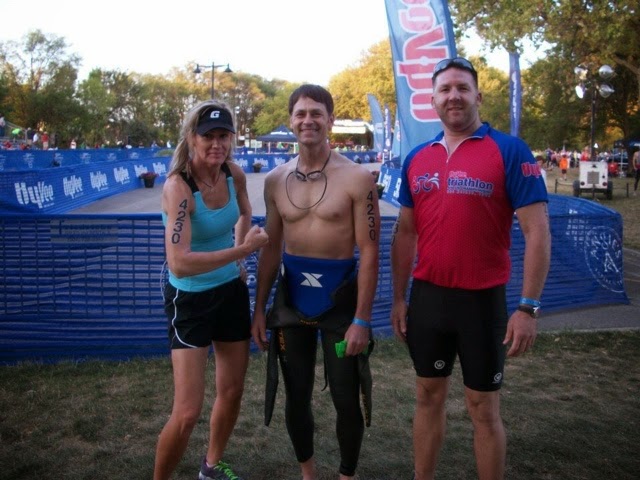