Laughing at Life...and moving on 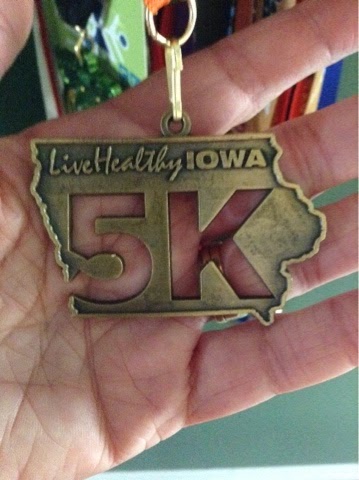 Well, this was a first-time life experience.

I have blogged (repeatedly) about my less-than-stellar speed. I'm not slow, by any means, but I'm never towards the front of the herd. That's all fine and dandy. What my body lacks in speed, it more than makes up for with endurance. And I'm quite happy with that.

Like most runners, I started out doing 5K races. The distance was perfect...not too short, and definitely not too long. As I became more "seasoned" in my running shoes, I started running farther and doing longer races.

Consequently, as I was trained for longer distances, I noticed my speed (for lack of a better word) had suffered. I have read that it's common for endurance athletes to eventually lose some speed as their bodies adjust to the slower pace needed to run long distances. Having never been super speedy (nor super agile or athletic), I was completely fine with that.

And let's not forget about the piriformis demons that have been plaguing me for a few years. With on-going aches & pains, stiffness, and limited range of motion, it was a given my speed would be less than desirable. I learned to accept my situation and make the best of it. Even though I wasn't as fast as I think I coulda/shoulda/woulda been, I still was doing alright in races. Not leading the pack, but usually towards the front of the "middle-of-the pack" runners. I was completely fine with that, too.

In recent years, I have started shunning 5K events. Most 5K's are charity events, raising funds for a worthwhile cause or recipient. Although I am all for supporting a great fundraiser, the frustration with my diminished speed kept me from participating. Besides, having done so many distance races, a 5K race is over and done so quickly it hardly seemed worth my time or effort. I know, bad attitude!

Recently, though, I have had a revelation. Every race (and every distance) has its advantages and challenges. Even a simple 5K, for a distance runner such as myself, can be a challenge. The distance is minimal, but try running that "short" distance at a faster-than-what-feels-comfortable pace and you have a race that is not so easy after all.

Case in point, The Live Healthy Iowa 5K (more info here). This was an event that took place in 14 different towns within the state of Iowa, culminating a 10-week challenge for its participants. The Live Healthy Iowa initiative is geared towards promoting a healthy lifestyle, and encouraging people to get out and get moving. For many participants (I went to the Bondurant location), this was their first time pinning on a race bib. There were a lot of runners, but I would guess about 2/3 of the participants were walkers (there also was a 1K for children).

I registered for this event for a chance to step out of my comfort zone and test my speed.  I have felt a gradual transition to (almost) pain-free running recently, due to more consistent yoga, stretching and daily foam-rolling. I have had several "effort-less" training runs, most of which have been at a faster pace than usual for me. I have kept my weekly mileage to a minimum, and  have really focused on going for quality (rather than quantity) miles instead.


My always eager-and-willing-to-run-with-me friend, Barb, came along with me. We arrived early, got our packets and hung out in the car to stay warm. It was in the upper 40's, bright and sunny, but crazy windy!

The race started with a short zumba warm-up. Ha!  It was almost like church....Barb and I headed over to take part, and everyone kept filtering in behind us...no one wanted to be in the front row. I have learned to laugh at my awkwardness, lack of grace and limited coordination (I trust some of the gals behind me were laughing at me as well). The instructor made it fun, and I could feel my legs and core getting warmed up...but every time she turned to go right, I seemed to want to (naturally) go left.

We lined up for the race and were told to, "GO!" The route basically was an out & back, with a loop around a small lake in the middle of the course. There was a pretty strong south wind. We ran a couple blocks north before turning to go east towards the lake, and the cross wind was brutal! I was hoping to maybe hit a 5K PR (it's been awhile...), but with the wind and my cautious recovery, I knew it best to run based on how my body felt. I didn't have my fancy GPS watch (this was "just a 5K," don't forget), but I had my basic stop watch. Since there were only three miles involved, I figured I could do the simple math in my head to monitor my pace.

I didn't feel like I was going unusually fast (probably due to the wind), but I was able to hang with the front of the pack for the first mile or so. There were maybe a dozen other runners in front of me, and we were pretty well spread out by the time we made it to the lake. My watch said 8:11 as I passed the Mile 1 sign, which seemed fast. It wasn't until I was part way around the lake (and noticed my watch said 8:15) that I realized  I still had it set on regular time. Duh! I switched it over to the stop watch mode, and the 12:XX meant nothing to me at that point. Oh well!

There was a brief reprieve from the wind as the route curved around the northeast corner of the lake. I chose to not bring gloves because I usually peel them off after the first half-mile, so my fingers were freezing! I was starting to feel a weird something down the back of my left leg...not sure what that was, but I assumed it was probably related to my on-going piriformis and hamstring issues. It was not painful, but it definitely felt a little strained.

As I made my way around the final curve of the lake, I could see the Mile 2 sign. I was running straight into the wind and was ever thankful for the sunshine. As I passed the sign, my watch said 17:XX...which meant I was (currently) at an approximate 8:30 pace. What? That was pretty fast for me, especially at the second mile of a race. I usually need 3-4 miles to get loosened up and find a comfortable groove.

Back on the final straight-away, going due west, I had the cross wind again. I could feel my body starting to slow down somewhat, and I was really looking forward to getting finished and out of the wind. By this time, the same dozen or so people remained in front of me, and there were several walkers approaching their first mile (coming from the other direction). I had passed a few people, and had also been passed by a few others.

Finally, I rounded the corner and tried to sprint as best I could (straight into the wind) to the finish line. I crossed the line, and noticed my watch said 25:33:44. Wow. I wasn't certain what my current 5K PR was, but I knew this finish time had potential.


Barb finished a few seconds later. Both of us agreed to head to the car and get our jackets. She made the comment that we started pretty fast, but the wind was a little ominous. We also were hopeful to place, given the small number of racers ahead of us (all of whom looked quite younger, by the way). She pulled up the stats from her watch, and said we ran the first mile in 7:55! No wonder my left hamstring was kind of angry with me, that's the hardest it's worked in awhile. That's just under an 8:15 pace!

We waited around for the awards, and did some post-run stretching. The children had a 1K, and some of the 5K walkers were still filtering in.   They announced the male award recipients first, recognizing the 1st and 2nd place finishers in each age division. As they were going through the female winners, I wasn't recognizing any of the gals. There weren't that many people ahead of me, so I was pretty familiar with who was (and was not) running. They got to my age group, and the two gals who got first and second did not look familiar either, nor did the two gals in Barb's age group. Barb and I exchanged glances, neither wanting to say the obvious.

Although I did hope to get a PR at this race, I certainly was not expecting to win (or even place). I am not an ego-driven racer who assumes a podium moment each time I put on a race bib, especially for a 5K. But I have done enough races that I can tell when the field of competition is pretty slim. And, when you follow the same runners for an entire three miles (all of whom look younger than you) and even they aren't getting awarded...something must be up. Barb was acquainted with the race director, but was at a loss as to what to do. Since we'd already been given finisher medals (which is rare for a 5K, especially in rural Iowa), we decided to let this go.

As we were walking towards our car, we passed by a group of gals who were talking with the director and asking about the results. We paused to hear what was being said. They were questioning the accuracy of the results. This race was not chip-timed, instead it was the traditional rip-off-the-bib-tag-at-the-finish-line method. There were a couple different volunteers helping, so it's possible the tags may have not been in order. The director apologized and said they'd review the results.

Awkward!  I have never been in this kind of a situation before. If it was a big event, with cash prizes or gift cards, I would have been more upset (of course, if it was a big event with elaborate awards, I probably would not have finished so close to the front of the pack). It's comforting to know other participants shared in our frustrations.We did get finisher medals, however, and I have the finish time on my watch (which actually was not quite a PR after all....but will stand as my second fastest 5K). Yes, an additional medal would have been sweet, but not necessary. And, I imagine the people who did receive the 1st and 2nd awards (whether legitimate or by accident) probably got a huge boost of happiness, hopefully a big enough  boost that they'll be inspired to do another race...and another after that.


So, yes, I am laughing at life, and moving on. All is good. Barb and I even celebrated out fast 5K finish times by running seven bonus miles upon returning back to town...all in prep for Grandma's Marathon (happening in 10 weeks!).

Have you ever been in a situation where you questioned the accuracy of the race results? How did you handle it? Or, have you been in the awkward position of receiving an award that really wasn't yours? 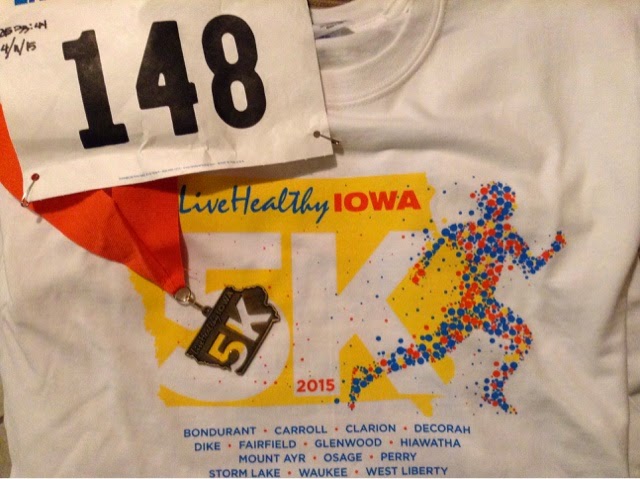