Ever experienced envy as a runner?

There are different kinds of envy in the world of running, and I have experienced every one of them. We've all felt speed-envy. A lot of newbies experience endurance-envy, and/or distance-envy. Most of us know what shoe-envy feels like.  Currently, I've been bitten (most aggressively) by Big-Event-on-the-Calendar-envy.

Did you know such a thing exists? Well, it does in my world. This is the first, in several years, that I do not have a major event on my fall calendar. Don't get me wrong, I have several great events on the roster, but none of them require the physical (and mental) toughness (or training) like I've needed in years past. It's definitely not a bad thing, but it does have me feeling a little displaced from my comfort zone. Usually, I strive towards getting out of my comfort zone...but in this case, not so much.

I have been running for over 10 years, and I have been doing distance training for the past seven years. The first few years went pretty smooth with moderate gains (in speed and distance) and minimal injuries.  In recent years, though, as all of the miles (in training and racing) have increased, there have been more injuries and plenty of aches and pains. It has taken me awhile (with numerous setbacks accompanied by physical therapy), but I have finally learned to respect not only the required training, but also the necessary rest and recovery following the events that caused said injuries.

So, what has happened to get me in this "envy funk?" Nothing bad. Plain and simple, I am happy with all that I have  accomplished thus far in 2015, but have chosen to go easy on myself and give my body a proper recovery from the events of the summer (a marathon in June, an ultra in July, and a duathlon in August). Many of my runner friends, though, are doing fall marathons, and the temptation is overwhelming to do one also. I hear about all of their double-digit training runs, and see their sweaty selfies...and I cannot deny the envy is clear and present.

My training was a little out of whack in preparing for my summer events (due to the demands of all my spring happenings and obligations), so I'm a little envious for a decent (and consistent) training schedule as well. Such is life.
Ever the opportunist, I am trying a different approach to my fall races this year..... (cue the drum roll) I'm actually going to try "racing" them instead of merely treating them as training runs. That's right. Since I don't have a big event looming over me (to save my "all-out efforts" for), I'll be shooting for some PR's. I'm not hoping to knock off a huge deficit in finish times, but I am going to try to focus more on my pace and splits than I have done in recent years.

Truthfully, that is a little scary for me. I'm not afraid of running 13.1 miles, but it's a different ball game for me to try to run it faster than what I have grown accustomed. I have the Park to Park Half Marathon (Waterloo, IA) coming up this weekend, and my next half marathon is the Des Moines Half Marathon, which is five weeks later (October 18th). That's plenty of recovery time in between the two 13.1's.

Also nestled in among the two half marathons is the Quad Cities Marathon (Sept. 27th), and for the first time ever, I'm running on a marathon relay team (my leg is just under seven miles). It will be strange to not be running the full marathon (like I did in 2013) all on my own, but I am looking forward to this new adventure in sharing the 26.2 miles with a team. After all, it doesn't always have to be about me.

This weekend's long run reinforced the value in a "conservative" fall schedule for me this year. I had a couple of really good (moderately speedy!) runs this past week in the sweltering heat and humidity, so I was confidant my long run on Saturday would go just as smooth.

My friend, Barb, and I ran 10 miles, and it was anything but easy. We got a pretty early start (6:45AM), so the temps weren't too bad (though the humidity was already high). Most of those 10 miles felt like a constant struggle for myself. Although the typical aches and pains were minimal (and gone after the first couple miles), my energy level was non-existent. I didn't have water along with me (though we stopped at a couple drinking fountains), and I hadn't slept very well the night before. Add in the humid air, and I had a whole mess of challenging circumstances. These difficult training runs happen to all of us now and then. They're not fun to endure, but they do make us stronger.  Even though I have run 10 miles many times before, the thought of going any further (as needed for 26.2 training) seemed especially crazy (and nearly impossible!) to me on Saturday morning. Thankfully, I will not have to worry about running any farther than 13.1 miles for awhile.

I expect to have a few (actually several?) fleeting thoughts of switching my registration to the full marathon in October, but I will fight them. I know I could grit it out and do a full marathon, but it would not be pretty (or a wise decision for my "in recovery" state of being). I know my body needs this recovery time, and I have already seen some significant improvements (in speed and diminishing aches/pains) due to the conservative mileage I've been logging...I am going to just keep moving forward and trust what my gut instinct is telling me. Most of us are blessed with a gut instinct, after all, it's best to respect it. Right? 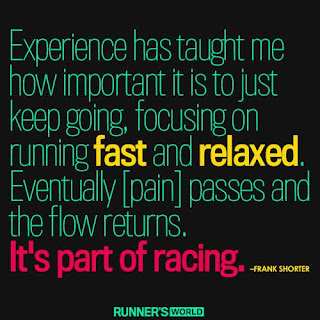 Have you ever found your self in a bit of a slump while on sabbatical from intense training? What did you do to control any event-envy you may have experienced?