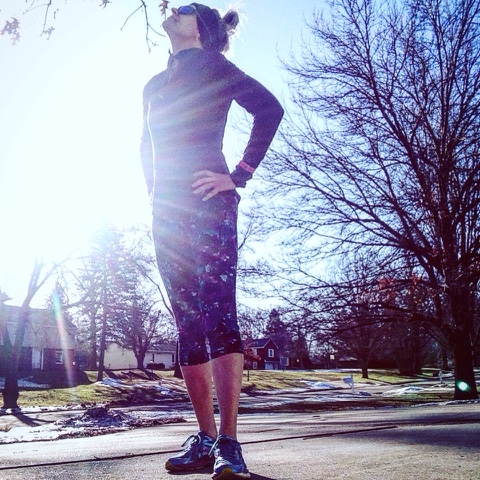 Global Running Day is June 1...are you celebrating? Did you know there's a national day of celebration for those of us who love to lace up & run? 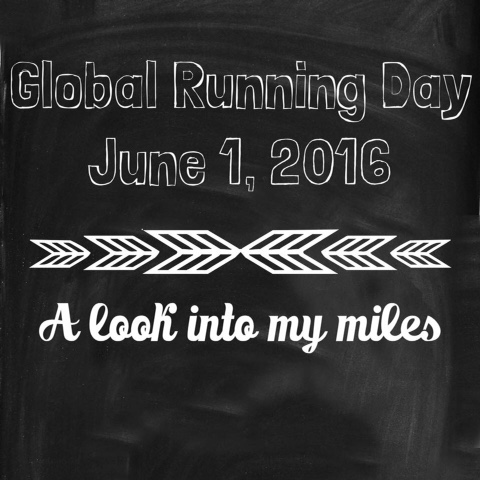 I'm linking up with Kristen at Jonesin' for a run and we're all sharing some trivia about our (running) lives.


-why do I run
At first, it was about getting in shape and adding some exercise to my life (**disclaimer-I was not overweight, but I did need some fitness!). I had done a few 5K's in the past, but had never been able to run the entire 5K distance without a few walk breaks. I set a goal of doing a local 5K (and gave myself about seven weeks to train for it). I ran almost exclusively on the treadmill back then because I was too embarrassed to run outside (I didn't really consider myself a "runner" yet, so I didn't want to look like a poser). After gradually increasing my distance on the 'mill, I could run an easy 10-minute pace for three miles. Race day arrived, and I ran the entire 5K (without walking!), and finished around 27 minutes...totally smashing the 10-minute pace that I'd grown accustomed to.

What did I learn? The treadmill was holding me back. Once I stepped foot outside, I could run as fast as I wanted and on my own terms. Sure, I could have set the speed faster on the 'mill, but I'd still be "keeping up" with it and not dictating my speed all on my own.

-how do I plan to celebrate National Running Day?
I'm helping organize a local NRD "group run" in my town. The past 3-4 years, a bunch of us have met and knocked out a few miles in celebration. We usually wear a favorite shirt from a recent event.

-total miles so far this year? Mileage goal?
Currently, I'm at (approximately) 335 cumulative miles for 2016 this far. Not huge numbers, but I'm not a quantity gal. Interestingly, approximately 98.5 of those miles were run in the month of May (and May isn't over). Also, I took a bit of an off-season over the winter, and this time I was very obedient in doing so. Personally, I don't believe in setting a quantitative goal because then it becomes all about the numbers, and a great deal of the quality is lost. Also, a quantitative goal may cause the runner to ignore impending issues or injuries all in a quest for bragging rights...so I have learned it's in my best interest to (sometimes) let the numbers go. I'm pretty fortunate that I can maintain my fitness and endurance without grandiose numbers.

-big events on calendar so far
Well, I have had one half marathon so far (and several 10K's). The half marathon was not a PR, but I came darn close. I was able to land my first sub-2 hr 13.1 in almost two years, and this was on a very hilly course on a windy morning. SO, I'm hoping to run a few more sub-2's. There's also this little Ultra happening in July...12-hour endurance over-nighter. Oh, and did I mention Route 66 in November?

-before I leave for a run, I must have...
Obviously my running shoes (and fully-clothed, usually in something colorful),but I also love to have my music along for the run. If I'm running with a friend (or a group function), then I usually leave the music at home. And the GPS watch? Not a requirement, but I do bring it along (sometimes) for long runs to gauge my pace.

-Do I track my miles? If so, how?
I have always tracked my miles. I keep a running log, but I'm very old-school about it. It's all hand-written, scribbled in the little spaces on our family's "main" calendar.

-favorite running partner(s)?
I have a slew of running partners, including my husband, a local friend (who accompanies me to many of my races and training runs), and a huge network of online Virtual Running Buddies. Several of these VRB's (and myself) all met up and did an amazing 6-hour (overnight) Ultra last summer. There was a lot of blood, sweat, tears, hugs, and laughter, and we agreed to do it all over again this July (except we're going to conquer the 12-hour endurance event instead).

-one piece of advice about running
Ultimately, you have to do it YOUR way. Others will run faster. Some will run more often. Many will run farther. Bottom line, consider the advice you receive from fellow runners, but don't be an imitator. No one else will have the exact same life as you (with the exact same family, genetics, or lifestyle). Find a way that works for YOU. And, smile as you're dong it!

-my relationship with running in one word
fulfilling!

How about you? Are you lacing up and knocking out a few miles on Global Running Day?