It's been a most interesting week, I'll give it that. It started out a bit rocky at one race, and it kind of came to a crashing halt at another race on Saturday evening.....but I'm still smiling. All hope is not lost, and I am at total peace with everything.

Care to hear what went down?

For starters, there was quite a bit of racing (four races, actually). The first race happened on Monday (the Fourth of July), a 5K in a nearby town...the Sully Freedom Fun Run (recap HERE). Although I was hoping for a better finish time, I was satisfied with how I did that morning. Since I had scaled back my mileage in June, I didn't know how much that would affect my speed (my "speed" is slightly above average, at best), but I did manage a 2nd place age group award. Not bad for the limited running I had done leading up to race day (and a recovering wonky heel).


Tuesday was a non-running day for me, but the planking and squatting challenges are still in full swing.

Wednesday, had me rising and shining and out the door before 5:30AM.  It was a balmy morning, and cloudy. There was no sunshine, but plenty of humidy in the air (I'm in Iowa, after all). I knocked out four miles, and also did some planking on the icky, gritty walkway.


Thursday and Friday were also non-running days for me. With the continued healing of my heel (and impending 14 miles of racing on Saturday's roster), I elected to take it easy on the home front. Some planks, squats, push-ups and stair work kept me busy.

On Saturday morning, I headed to Marshalltown (about 30 miles away) for another race, the Grimes Farm Run (8K Trail). This was my fourth time running this race, and Saturday's temps were near perfect (mid 60's, with a slight breeze).  I don't run trails as often I'd like, but I do love the challenge of the terrain, grass, hills, and occasional tree roots. There was not a big field of competition for the 8K (there's also a 5K run/walk, and a kids' run), so they didn't do age group awards. I finished third overall for women, but the "honor" doesn't mean much when there's only six gals (and I think two of them were walkers). None the less, I brought home another Grimes Farm Run medal (I have placed each of the other times I've run it). Stay tuned, the race racap is coming.

Saturday evening, Barb and I headed to Ames, IA for the Midnight Madness races (appropriately named). We were registered for both the 5K (at 7:30PM) and the 10K (at 8:30PM). My hamstring/glute/piriformis was still feeling a bit "off" from the trail run, but I had been massaging and foam rolling throughout the afternoon. Although it didn't feel quite right, I wasn't concerned because I've dealt with this kind of annoyance before (MANY times).

Without going into too many details (I'll save those for the recap...in a few days), things did not play out as I'd hoped. With my ultra happening in less than a week, my strategy was to run the 5K easy and (hopefully) be warmed up enough that the 10K would be easy-peasy. That was my plan (it looks pretty good on paper, doesn't it?).

The 5K proved to be very challenging, mentally and physically, leaving me with doubts as to whether I should even attempt the 10K or not. The temps were really hot (80's) and very humid, and I was feeling dehydrated and exhausted from the extra effort that "easy" 5K required of me.

I decided to give it a go anyways.Unfortunately, within a quarter-mile or so of the 10K, I knew it was not meant to be. I ran most of that mile, but it did not feel right. I could tell my gait was off, and each step with my left foot felt awkward. The first mile ended near the finish line, so I decided to pull out and call it quits. I found a race volunteer and surrendered my timing chip. Yeah, my first-ever DNF.

The reality? Although I have never DNF'd a race (and I have been doing races of various distances for 11+ years), there have been many times where I have been tempted. There have been many reasons (frustration with my pace, horribly hot weather, difficult race course, painful blisters, etc.) for wanting to give up,but I have never given in before. I was surprised that when the time came to officially "call it," it was an easy decision. My hamstring/glute area had been feeling off all week.  I noticed it during the 5K on Monday, and although it was not bothersome, it was there on my Wednesday morning run as well. The trail run had gone alright, but I could feel the persistent, nagging tightness and limited range of motion as I was climbing the hills and high-stepping through the grass.

My gut was flashing "Warning! Warning! Alert! Alert!" I didn't ignore the warning signs, but instead tried to be rational about what was going on. The reality? I've had these issues before and I know it takes 3-4 miles to get loosened up (even with proper stretching and warm-up prior to running). Although I was very much aware of what was happening, I was not worried or concerned it would be a problem. Unfortunately, my reality kinda bit my buttocks (literally). Ironically, the wonky heel has felt darn close to perfect this week, so there's that (#glasshalffull).

So, although this is certainly not how I had planned (nor wanted) my week to end, I'm content and I'm at peace. Yes, I am disappointed, but I am not defeated. I'm thankful I had the sense to stop at mile 2 of the 10K before things got worse. I'm thankful to not be into ego-centered antics (or I may have pressed on and caused serious damage). And, I'm thankful that I have several days to rehab my aches and pains (which actually feel more like intermittent "discomforts") before my Ultra on Friday night.

I mentioned the squat challenge, as well as the daily planking and push-ups. In lieu of my upcoming Ultra, and the need for some taper time (last week and this week, as well as the weeks following the Ultra when I'll be in recovery mode), I came up with my own July Daily Challenge. I began doing all of these mini workouts last week, and plan to continue for the remainder of the month. Care to join me? 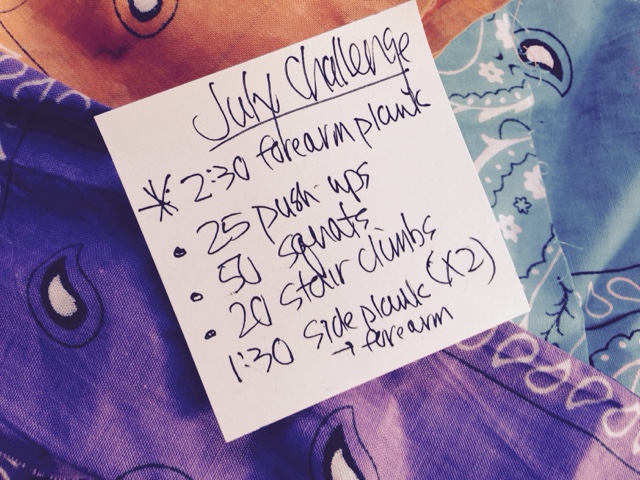 Here's another reality check.....if doing squats, and desiring a pic of a particularly difficult badass pose...keep in mind your running shorts may flare out and make your bum look more grandiose than it already is. Fair warning.
The phlox have started to bloom! Aren't they beautiful?
If you want to win your dog's heart, brush his fur. Max especially LOVES having his neck brushed.
I received a pair of SLS3 compression socks recently. I love compression sleeves, so I'm looking forward to testing out these full compression socks. I have already worn them once, and will be trying them for various other activities, including recovery. Be looking for a review soon!
Also, as a unified front, several people have been joining the #PeaceSignMovement, as a sign of solidarity for peace, love, happiness and respect for all lives. I felt compelled to get on board and follow suit.

As usual, I'm linking up with the wonderful Weekly Wrap gals, Holly from HoHo Runs and Tricia from MissSippiPiddlin. Please, head over and checkout their blogs, and see what's happening! There's a LOT of great reads in the linkup!!