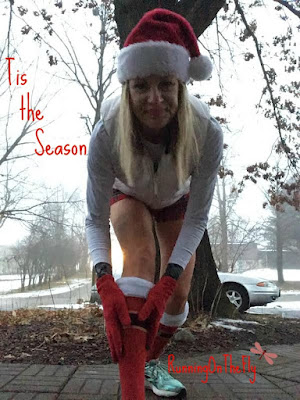 Tis the season for celebrations, and this past week came full circle.

Eager to get back to some "regular" mileage, but still in the thrones of marathon recovery, I cautiously eased back to a somewhat "maintenance" routine regarding my off-season.  As most know, I have been doing the Runner's World winter streak, which commenced on Thanksgiving morning and will conclude on New Year's Day. I have been very conservative with my streaking mileage...most days running only the 1-mile minimum.

After running three easy miles last Sunday (on the treadmill, none the less), I decided it was time to start slowly adding mileage back to my runs. I do plan to end my streak on New Year's Day...and I look forward to having (and enjoying!) some non-running days back in my schedule.

That said, here's what went down this past week.

Monday's run was a 1-mile "quickie" after work. After a sub-ZERO weekend, the 20-degree temps felt tropical.

Tuesday, I had another of my extended lunch hours, so I ran my 1-miler, then headed back to work. Again, temps felt awesome! And, with the Winter Solstice happening the following day, I was euphoric in anticipation of the longer daylight that was on the way.

Wednesday, the temps climbed as high as 39-degrees! In Iowa! In late December! This was my first run without needing a puffer vest or a jacket in a long time!

Thursday, I got up early and knocked out two easy miles under the light of the crescent moon. Total tranquility!

Friday, myself and some locals met up after work and ran approximately four miles. The streets were full of slush, and the air had some rain. But, we saw some beautiful Christmas lights and enjoyed the camaraderie of a group run.
My running buddy, Barb, had foot surgery a few days following our marathon (Route 66 Marathon, November 20th), and finally got clearance to lace up and hit the road. After Friday's group run, she was eager to do a few more miles with me on Saturday. We met up and ran three easy miles.
Sunday, being Christmas, I did my streak run fairly early in the morning (before all the events of the day began). The temps were in the mid-30's, but (again) felt mild so I ran a quick mile in shorts! Believe me, that does not happen very often on Christmas Day!

All in all, my weekly mileage came in at 13 miles. That may seem like peanuts to some people, but to me it felt like a successful start to my rally-back-from-recovery. I don't have anything on the calendar until March, but there a few events in February and January that I'm considering. For now, I don't need excessive miles but I do need to conservatively build my base back a bit. I'm still having some "issues" with my hip/groin thing....I don't feel anything when I'm running (thankfully), but something is still a bit off (I notice a pulling sensation sometimes if I bend over or twist/turn abruptly). I'm not concerned about it, but am proceeding with caution. Stay tuned.

Nobody in my household is interested in helping decorate, so getting the ornaments on the main tree took a little longer than usual. I finally got all the finishing touches in place last weekend.

We had out holiday party at work on Friday afternoon...so my #FridayFashion post reflected my "party attire." FYI---I don't  usually wear knee socks with a skirt (unless it's a running skirt, and I'm actually wearing running shoes with it). But I thought, "Why not?"

This was our first Christmas without all three kids in the house. Our oldest daughter resides in Pennsylvania (since August of this year), and was not able to make it back to Iowa (though she did come back for a week at Thanksgiving). Fortunately, we were able to talk with her and FaceTime, so it was bearable not having her with us.

And, this little guy. Max has been with us for almost two years, but this was the first time we dressed him (briefly) in a Santa outfit. The outfit was gifted to us from a friend whose dog had outgrown it.

So how was your week? Any holiday parties? Do you wear red and/or green during the holidays? Dressing dogs in "clothing"....yay or no way?

As usual, I'm linking up with the awesome Holly and Tricia for the Weekly Wrap. Head over, check out their blogs and the (numerous) linked blogs as well.