It was a busy weekend in Philadelphia!

Not only did I get a quick tour of the downtown scene, I had the opportunity to lace up and hit the streets running, quite literally. Let's just say that the City of Brotherly Love did not disappoint.

With a 7:30 start time, and a 1.5-mile commute from my hotel, I was up by 5:45 a.m. to allow for a quick breakfast (I had brought along some instant oatmeal) before heading out. There was a 6:45 meet-up for the We Run Social group pic that I was hoping to get to, so I left the hotel around 6:20 and shared a cab to the Philadelphia Museum of Art (near the start line) with a fellow runner.
A short while later, I was able to find Kim as we were lining up. I have known Kim for awhile (via blogging and social media), and we finally had the opportunity to meet at the R'n'R Chicago back in July.
Before long, our corral neared the start line, and we were off! We wished each other well, and went our separate ways (having run both the 5K and 10K the day prior, Kim wanted to take thing easy).
I, on the other hand, didn't really have a specific plan. My glutes have been a bit on the angry side recently, but everything was feeling good on race morning. I had done an easy-paced 3-mile shakeout run the previous morning, but then spent almost 2-1/2 hours driving from Hanover to Philly (ugh!). After a few hours of sightseeing (and over five miles of walking), though, all of my angry muscles felt much better when I'd gone to bed Saturday night.

As with most races, the first couple of miles were pretty crowded. I had started back a few corrals, so there were was a bit of weaving to get around some of the people. For me, that's actually a good thing...it keeps me from going out too fast.
The temps were mild, but definitely humid. We were lucky to have some fog and cloud cover. The first four miles took us on a scenic tour through downtown Philly. Being the art geek that I am, I was in total (art geek) heaven admiring all the amazing architecture and numerous statues everywhere. Seriously, is there any better way to explore a new city than on your feet?

The race course wound back to the Museum, and then took us out onto Kelly Drive, a street alongside the east side of the Schuylkill River. The temps continued to climb (as did the humidity), but the majority of the route (along the river) was shaded from the heat of the sun.

There were water stands (some of which also had Gatorade) every couple of miles. Although there weren't many spectators, there were numerous cheerful volunteers at all of the water stations. There were also a lot of rowers on the river, which made for a serene vista.

For the most part, I felt pretty good. My glutes had been a little stiff at the start, but nothing in comparison to what they'd been like in previous weeks. My energy felt fine, and I was able to run comfortably (kind of in that auto-pilot mode). Try as I might, though, I just didn't quite have the mojo to push myself to go any faster. I was also mindful of the heat, and the fact that I still had a marathon to run in four weeks...so this wasn't the time to be a hero.

Near the 9-mile mark we crossed over a bridge, taking us to Martin Luther King, Jr. Drive for the return trip (on the west side of the river). By this time, the cloud cover was completely gone, and the sun was shining strong. And the intermittent shade (from the trees) was diminishing.
There were times I could feel myself slowing down, but I never felt the "need" to walk. Well, there was a brief walking episode in the 11th mile when I tried to put the extra SiS gel (a course volunteer had given me) into my fuel belt and it was a total failed effort until I stopped running (briefly) ...only to have to retrieve said gel from the belt (a few minutes later) because it made everything bounce (I wish I was making that up LOL).

Other than mile 3, I find it ironic how miles 1 and 13 are my two fastest miles. Anyways, the 9:40 pace is a bit faster than my pace from two weeks ago (at the NewBo 13.1), which was 9:46. Even though this half marathon time reflects a slightly longer course, the fact that I ran it with an itsy bitsy faster pace makes me smile. That's my fastest 13.1 pace in 16-1/2 months. I'm totally good with that.

Here's a sampling of my pics...what do you think? To buy or not to buy?
Overall, I thought the R'n'R Philly Half Marathon was a great event. The course was pretty flat for the most part,and well supported in terms of water/aid stations. I also saw several medic stations along the route. My only complaint (and it's a small one at that) is I wished we would have had a few more miles in the actual "downtown" part of the city. That said, the 9-ish miles along the river were quite serene and shaded.

The race shirts are gender-specific, and I think the graphics are nice. And, check out the medal! The reference to Love Park and the Liberty Bell...total perfection. 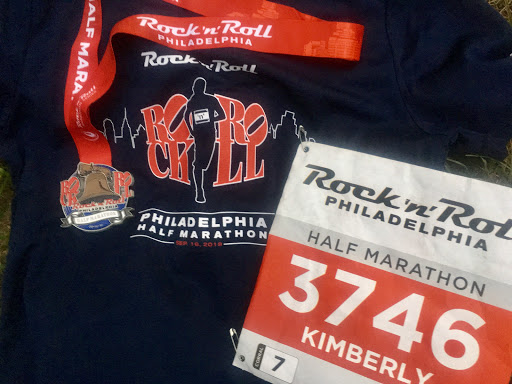 This was my first time visiting Philadelphia, and I'd LOVE to go back. The city has a lot to offer, and this R'n'R event was a top notch experience for me.
So, talk to me! Have you ever been to Philly? Is this a race that you'd like to do? Have you ever run a race where the distance wasn't in sync with your GPS tracking device?

**Disclaimer**As a member of the Rock'n'Blog team, I received a complimentary registration for the R'n'R Philly Half Marathon. The views and opinions expressed here, though, are all my own.

**I'm linking up with Marcia and Patty and Erika for Tuesdays on the Run.
**I'm also linking this with Debbie and Rachel and Marc and Lora for the Running Coaches' Corner
Let's connect : Facebook Instagram  Pinterest Twitter
Posted by Kim at Running on the Fly at 9:27 PM