with a little help from My Friends

Friends. Honestly, can we ever have too many?
I think not!
This week had all sorts of action, and the majority of it involved the company of friends while it happened. Lucky me!
There was also plenty of chilly weather. Oh well, it can't all be sunshine and warmth. Truth be told, we are entering the season of darkness and cold...
Before I share all the details, welcome to the Weekly Run Down!
I love hosting this link-up with Deborah (from Confessions of a Mother Runner)! If you write a fitness-based blog, you're invited to join the party. The link-up opens at 8:00AM (EST) on Sundays and remains open through noon on Monday. We love reading about everyone's weekly fitness endeavors, training highlights (or low lights) and race recaps. We ask that you link back to both hosts, and we encourage you to read/comment on the other linked blogs as well...please don't link-drop & dash ;-) 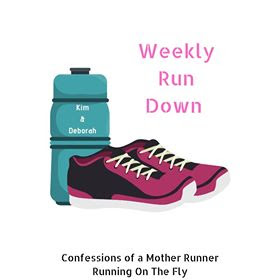 Anyways, here's what went down, in my friend-filled week of fitness:
Sunday: Running for chocolate in Chi Town!
As most know, Sunday morning had my WRD co-host, Deborah, and myself checking out the Hot Chocolate 15K in downtown Chicago, and along some of the lakefront. We were blessed with near-perfect weather, 9.3 miles of chatter and laughs, and hot chocolate at the finish line. Doesn't get much sweeter! 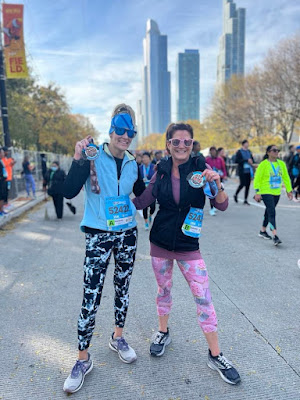 Never miss a Monday.
A near repeat of the week prior, Amy drove over and we did the same routine...a 1/2-mile warm-up walk, three miles (of running) around the central campus, and walked the 1/2-mile back for a cool-down. What was different would be the warmer temps this week. There may even have been a couple of 1-mile walks at work. Later, after work, it was probably Gustavas' last hurrah for the season...I thought of doing 10 miles, but we called it at 6 when the darkness was just too...dark. 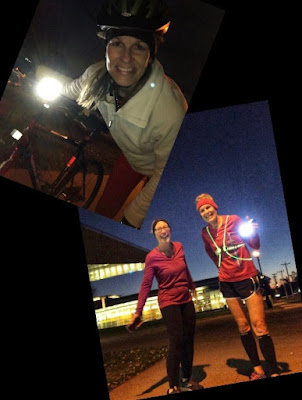 Another easy-peasy Tuesday Schmooze Day.
Yes, it is possible to rise and ride and smile as you're pedaling (in place). Sebbe and I hung out for 15 miles (of intervals) in the early hours. It's been awhile since I've done that long of an early morning ride, and it really was invigorating!  The warmish weather was still holding strong, so my friends and I were able to walk two 1-milers, on our breaks, while at work. 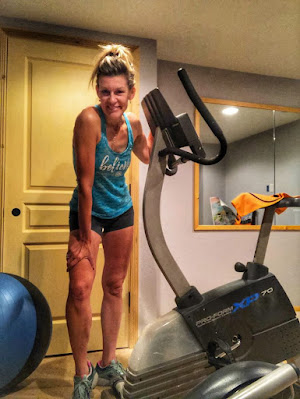 Triple workout Wednesday.
You know the Wednesday routine... wake up at 4:30 and meet Barb for our weekly #5at5 run (honestly, who needs coffee? LOL). With the bike path rides done for the season, I'm now bringing those rides inside. Sebbe and I pedaled for 10 sweaty miles, Wednesday evening, as I chatted with my best college buddy on our weekly let's-catch-up call. Afterwards, I did some upper-body strength work. Believe it or not, I slept well that night. 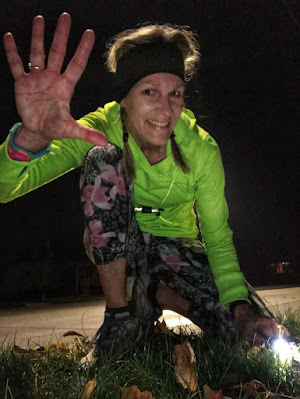 Recovery day Thursday.
Dropping temps and increasing wind, but most of the previous day's rain had moved on. I got out for a chilly and windblown 2-mile walk before work. One of my co-workers and I devised a route that kept us hidden from most of the wind, so we were able to get in a couple of 1-mile walks during our breaks. Thankfully, we had plenty of sunshine. 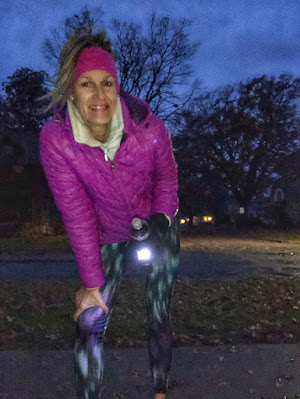 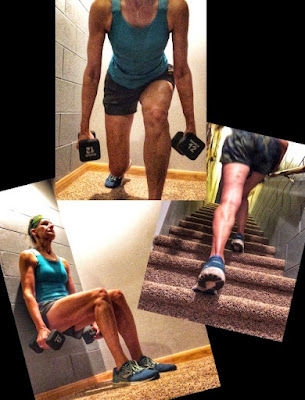 Not-so-long run Saturday
Dilemma: When the temps are the coldest they've been (32F,with a 23F feels-like & 11mph wind) and you're flirting with the DOMS (from the previous day's lower-body overhaul), what's a runner to do?
Solution: Head outside anyways, layer-up, and cut the intended 8-miler down to five. I met up with Barb, and neither of us were embracing the winter-like conditions. Ironically, it didn't feel as bad as I'd imagined, and I even ditched the gloves for the final mile or so. The DOMS? They felt better, but still were laughing at my legs. Oh well. No regrets! 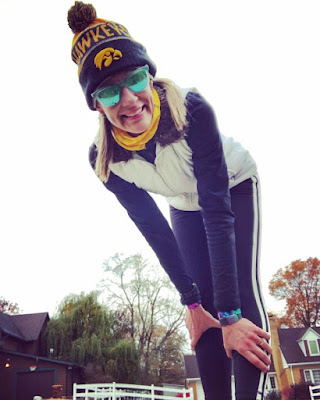 So, in a nutshell, this week was pretty active. I probably should have treated it more as a recovery week (following Sunday's 15K), but I honestly felt great (until the DOMS on Saturday morning). Running knocked out 22 miles, walking logged 16, and biking had 31. Strength training saw both upper & lower-body work this week, the latter mixed in with stair-training.

In case you missed out, here's what else went down on the blog this week:
BRRRing It!
Chicago Hot Chocolate 15K
Knockin' Around in my Knockarounds

Friday Fashion Flair! Cold temps had me reaching for my favorite wool sweater. I had to layer some black and gold underneath...you know, because there was a big game on deck for Saturday against Minnesota. Do you sport your team's colors the day before (or the week of) a big game? 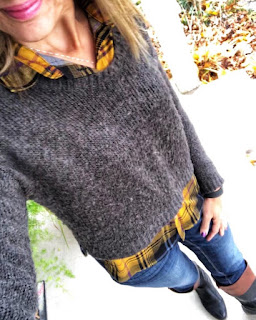 Say it isn't so...I awoke to this white stuff on the ground Friday morning. Ugh. I know, I know...it is that time of year. Last year, we'd already had two big snowfalls by this time (in October), so this was to be expected sooner or later. Still, it's a buzzkill when it actually happens...

Saturday (late) afternoon found me at another Iowa football game, this time with the oldest daughter (who actually is an Iowa State grad!). Gotta love a little mother/daughter fun, even on a cold day (for several hours) in a football stadium. The Hawkeyes defeated the Minnesota Golden Gophers, bringing their season to 8-2. Yes, it was a great day, on so many levels! 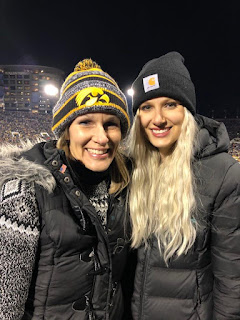 So that's another action-packed week all wrapped up. How did your week play out? Any of the "white stuff" in the air or on the ground? Any races? Any fitness endeavors with friends?

Click here to enter
Posted by Kim at Running on the Fly at 11:05 PM