Heavy on the Pedals 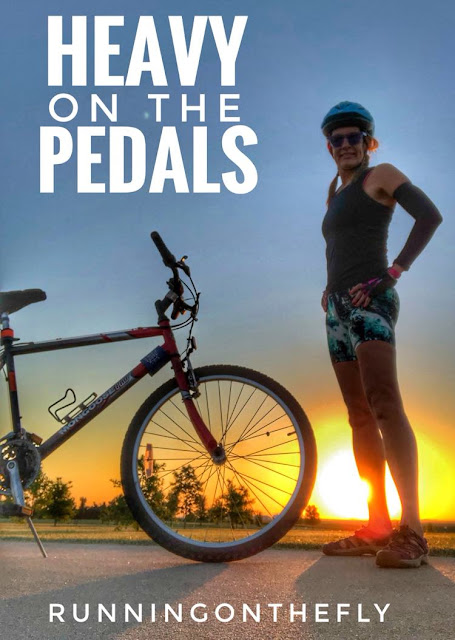 It was a Heavy On The Pedals kind of week, and the timing was immaculate.

After all, my right hip has been in a funk recently and I have a couple of races coming up. Why not give the compromised body parts a rest and have a little more fun on the bike(s)?

Besides, the bike therapy is three-fold: my endurance is enhanced, my legs are strengthened and the creaky joints get some recovery time. Honestly, it's a triple-win!

Read on for all the deets...

...but first things first: Welcome to the Weekly Run Down! 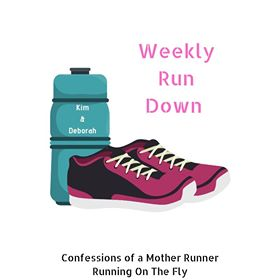 Anyways, here's what went down in my little corner of the universe this week:

An action-packed SUNday!
The morning started off on the chilly side (sorry, Momma N, but 59F on a "summer" morning just won't cut it in my world). Thankfully, the sunrise was on-point for my 3-mile walk. 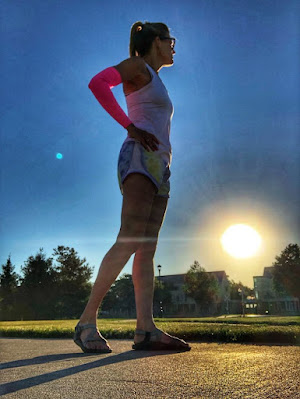 By mid-morning, the temps were on the rise as we loaded the bikes and headed to Solon (about 70 miles down the road) for a day of riding with our friends, Mike and Amy. Of course, in true Iowa fashion, we had plenty of wind on the return trip of our out-and-back trek along the Hoover Trail. 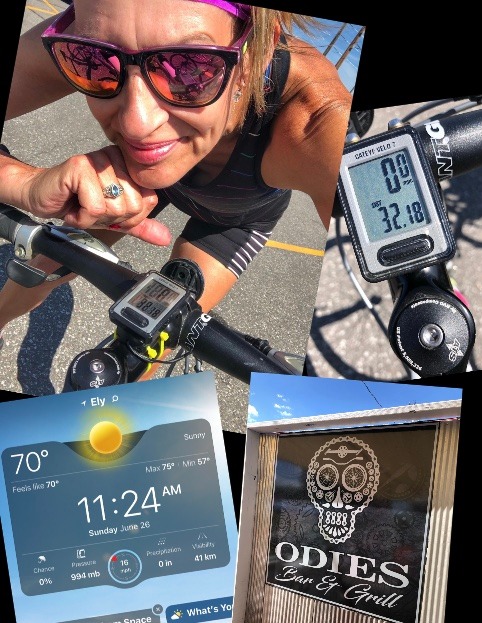 Never miss a Monday!
Similar to Sunday, it was another chilly morning (54F). I got out for a couple of easy-paced miles, amidst the sunrise. There also were two miles walked at work, then 13 miles (with Gustavas) after my work day had ended. 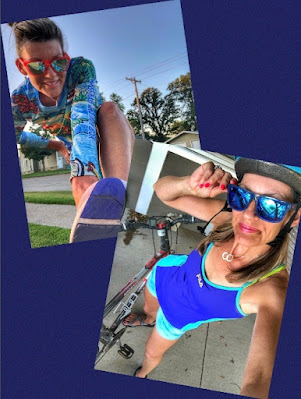 Tuesday's  upper-body burn...
Holy ouch! I treated myself (I use that phrase rather loosely, LOL) to a major muscle meltdown (upper body) in the wee hours. I also did some walking...one mile before work, two different 1-milers (at work), and then a laughter-filled 2-mile Pride Walk with Matty's drag persona, Mara (via the Peloton app), after getting home. 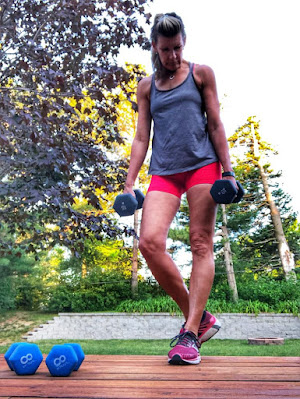 Double-Ride Wednesday (and Happy Birthday to Volde)
Gustavas and I caught another sunrise, while knocking out 12 miles, on another unseasonably cool  morning. By mid-morning, the temps had risen (a good 30ish degrees), so our morning "walking" break (at work) wound up being the only one for the day. 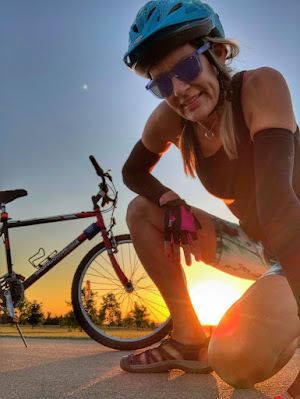 Later, after work, I met Amy for our weekly (hilly) ride. It wasn't just hilly, but it was hot and crazy windy as well. Have you ever attempted a hilly ride against a 16mph headwind? Suffice it to say, there's no downhill coasting, LOL. As mentioned, this day marked the 5-year anniversary of Volde entering my life (he's the 6-inch scar on my knee). No, we didn't commemorate the day with cake or ice cream, but we did take a 2-mile walk, following our hilly adventure in the late afternoon wind. 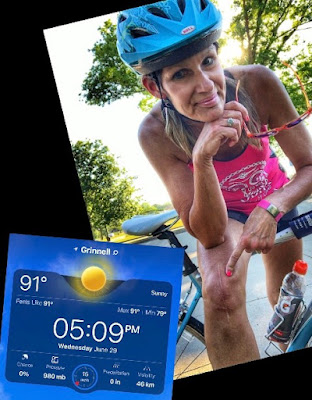 Thankful Thursday: Iron for breakfast
It's amazing how much "damage" a 10-minute Glutes & Legs workout can do. Adrian totally fried my backside with this EMOM (Every Minute On the Minute) concoction. He had us doing a 1-minute "activation" then 10 weighted squats (five each leg) and 10 weighted reverse lunges (also five for each leg)...for the remaining nine minutes. Doing the math, that would be 180 total reps (not counting the pulses from that first minute of warming up). Yeah. The two 10-minute arm workouts were (almost) easy-peasy after all those lower-body reps. After work, Barb and I headed to nearby Ankeny for a  sponsored group run (see below). 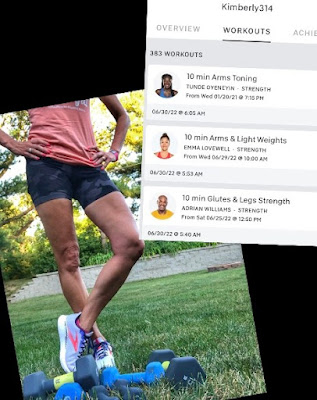 Friday...Can you say DOMS???
I was already feeling the start of some major DHDD (Dreaded Heavy-Duty DOMS) during Thursday evening's run, so it was no surprise to have things in full-blown OUCH Mode by morning. I got out for a quick 1-mile walk before work, and it was laborious, LOL. After work, I took Krystal out for 12 miles, and the biking worked some magic on my grumpy glutes. I also walked another two miles, so things were feeling more mellow by bedtime. Whew! 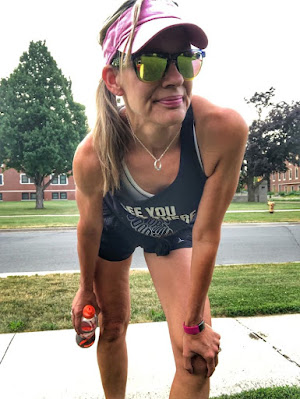 Saturday: All Kinds of Summer FUN!
Saturday blessed us with fabulous weather! It was a bit humid in the morning, but the early-morning temps were sitting at 60F when I headed out for a 6-mile run. I was a little tentative, given the recent angry state of my hip, but all went well. The tightness was still there, but much less bothersome than it had been. I did take brief walk breaks at each mile-mark, and made it back home in just over an hour. 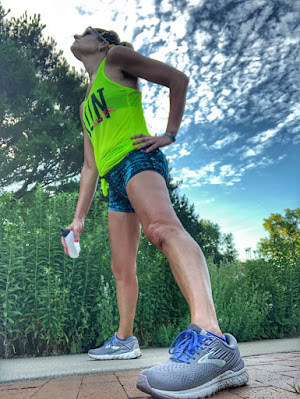 ...then, we loaded the bikes and headed to Bondurant (about 45ish miles due west) for the Bicycle Brew BBQ ride. This was our third consecutive year taking part, and this year the event fell on Independence Day Weekend. Mike and Amy joined us (and Barb was there, too!). The ride began at 11:00, with a stop near the 6-mile mark. The lunch stop was just short of the halfway mark (around 11.6 miles). There was one last stop near the 21-mile mark before ending back in Bondurant with 24 miles completed. Amy and I decided to ride a bit further, though, and did eight bonus miles, ending with 32 miles for the day.
...and what's on deck for Sunday?
I'm hoping for maybe an early morning walk, or possibly a short bike ride. Our son is back in the area  for a visit, so we're hoping for a family get-together with him and the two daughters at some point. The weather is looking a bit sketchy, so nothing is official at the moment...

Overall, not a bad week! I was a good girl, took my own advice, and stayed out of the running shoes for the most part. After Monday's 2-miler, I held off until Thursday evening before hitting the pavement, and I think that was a good call for me. I ended the week with 12 miles of running, 19 miles of walking, and 116 miles on the bike(s). My two strength sessions were intense, but short (just the way, uh huh, uh huh, I like it).

In case you missed out, here's what went down on the blog this week:
Grinding It Out
For the Love of My Shades
Taking a Chill, Having a Chai, Enjoying a Chat

Friday Fashion Flair. The day was a little on the dreary side. We didn't have any rain, but the sky looked like it was on the verge of down-pouring until late in the day. My solution? Wear some bright colors and bring your own sunshine. This sleeveless sweater is one of my hand-knit creations, and is a great lightweight piece for summer. 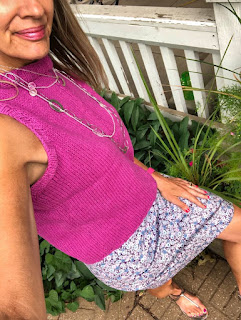 As mentioned, Barb and I went to a sponsored group run Thursday evening. A Des Moines-based running store hosted the event at the Firetrucker Brewery in Ankeny, and the Altra rep was there. I've never tried Altras before, and found out they weren't a great fit for me. Of course, it may have been the 3-day running sabbatical, the hour-long car ride, the time of day, and (quite possibly) the extreme heat and humidity all worked against me as well. It was a 4-mile run (two miles out-and-back), and it was a major struggle. My Garmin also died, so I didn't know (until we finished) we'd been running a 9:12 pace! Major oops! 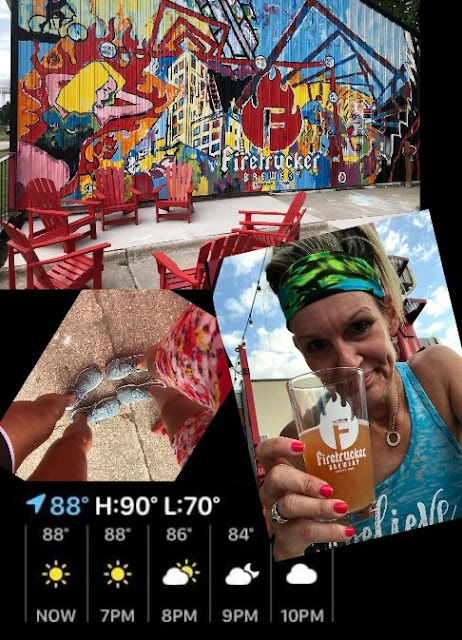 So there you go. Another week down, another week of fun in the summer sun. I'm hoping things continue on the upswing for my hip. I don't plan on overdoing the miles this next week, either. I have a  5K Monday morning, and a 10K Saturday evening...both events are ones that I've placed at numerous times before, so there is some self-inflicted pressure to continue that tradition (LOL). I bought a new Garmin Saturday (after our biking event), so I'm hoping to have that charged and set-up for these two upcoming races. Fingers crossed this new toy is user-friendly!

How did things go for you this week? Hot weather? Any great workouts? Struggle-bus runs? 4th of July races?

Click here to enter
Posted by Kim at Running on the Fly at 11:08 PM