Not your ordinary race...quite extraordinary, actually 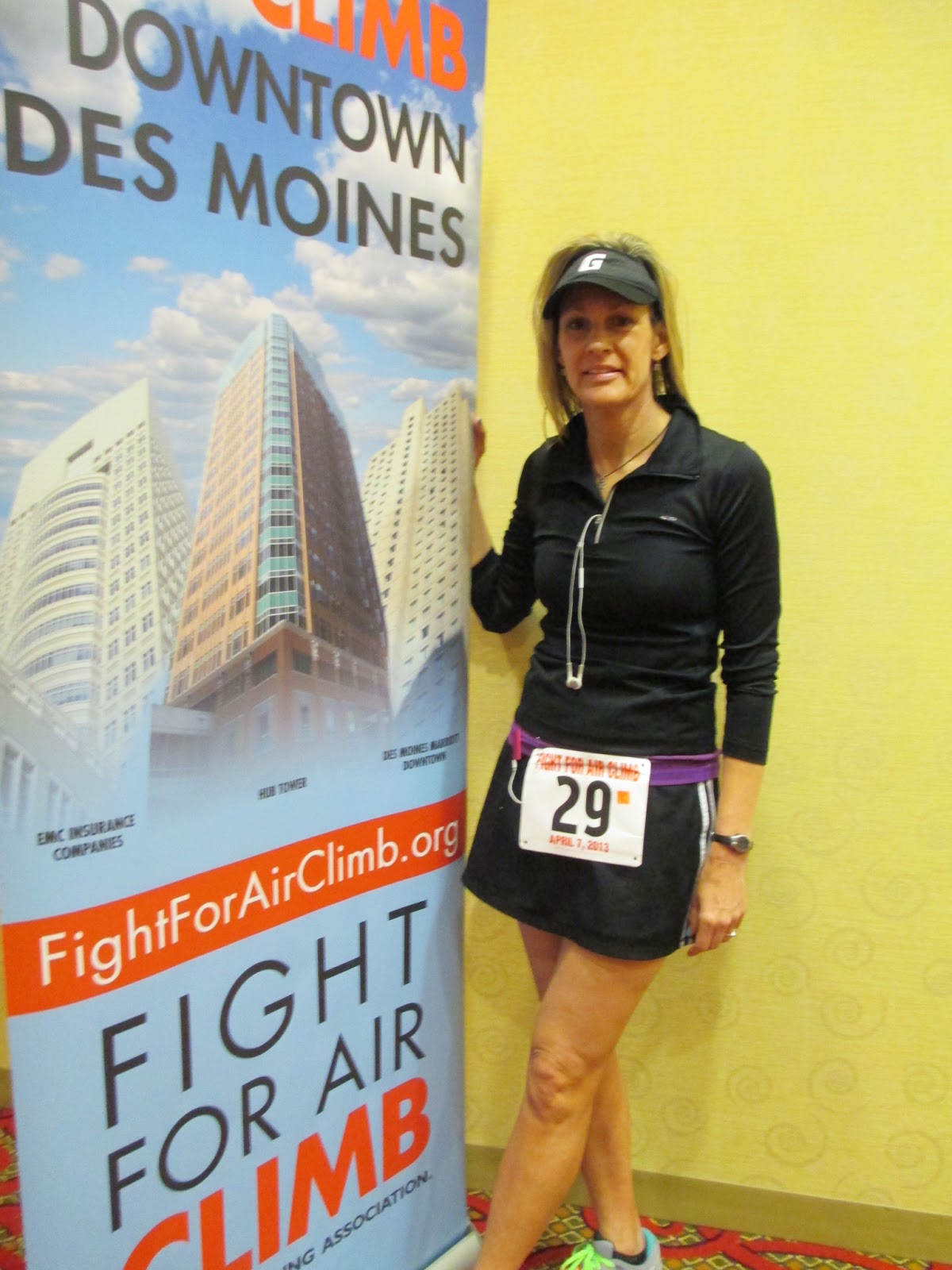 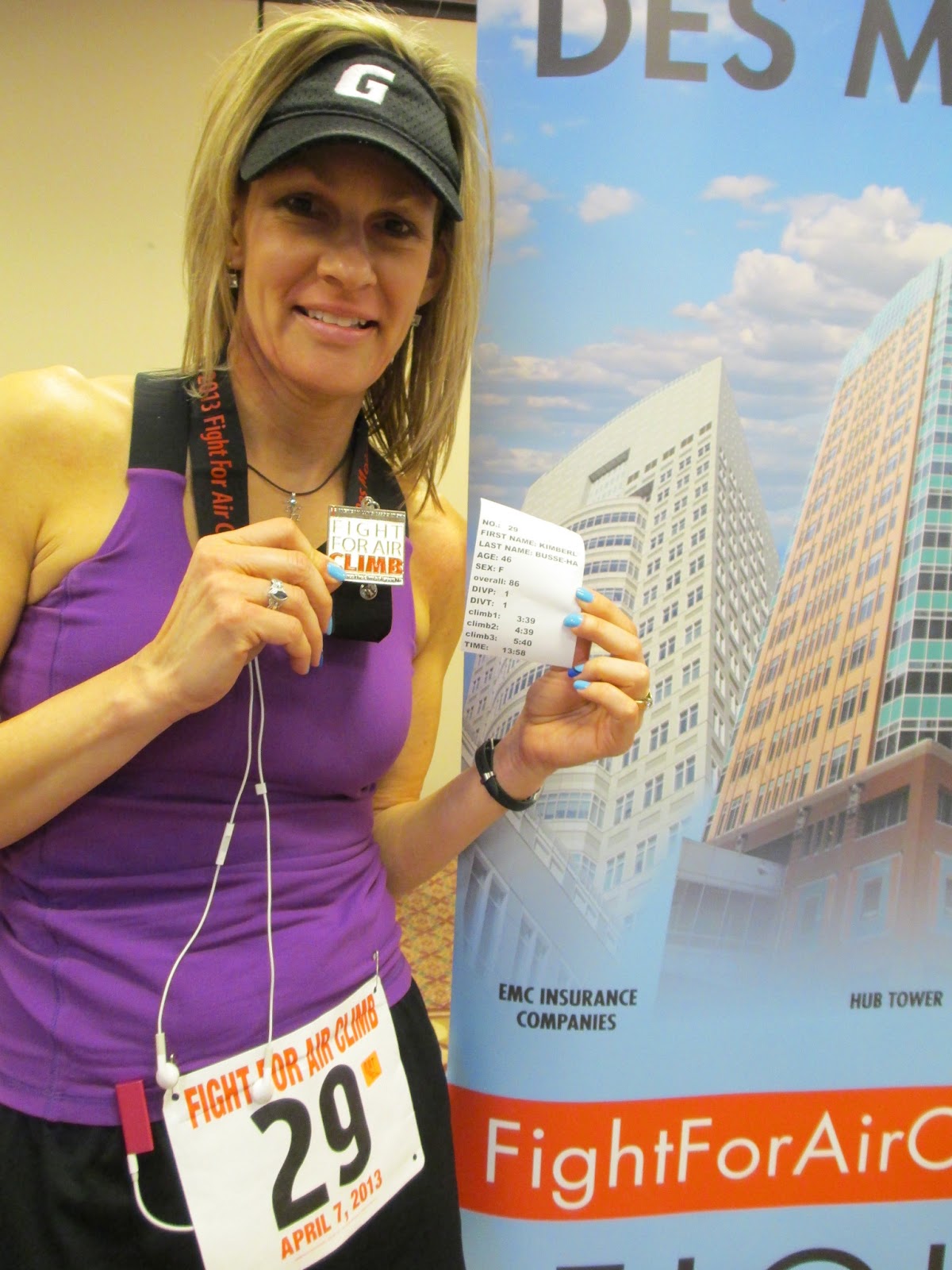 I ran my first-ever "vertical" race today.  And it was an incredible experience!

The Fight for Air Climb is an event where the participants race up stairs, raising funds for The American Lung Association.  It is a national event, and I took part in the one located in Des Moines, Iowa.

I have a passion for fresh air and fitness, and this was a perfect opportunity to not only violate my comfort zone (no, I had never attempted to climb 66 flights of stairs and, yes, I was up to the challenge!) but also a chance to show my support for this organization.

I assume it is similar for each event, but for the Des Moines location, each participant was required to collect a minimum of $100 in donations.  It seemed a little intimidating, but I also think it helped to weed out the devoted racers from the others.  I have wanted to to this race for several years, and I always seemed to see it on the news after the fact.  This year, I was able to find it online early and register on time.

The Des Moines venue utilized three tall buildings: the EMC Building, The Hub Tower, and the downtown Marriott, all of which are connected by the city's sky walk system.  Racers were to report at 7:30AM to check in, get their bib numbers and receive their timing chips. 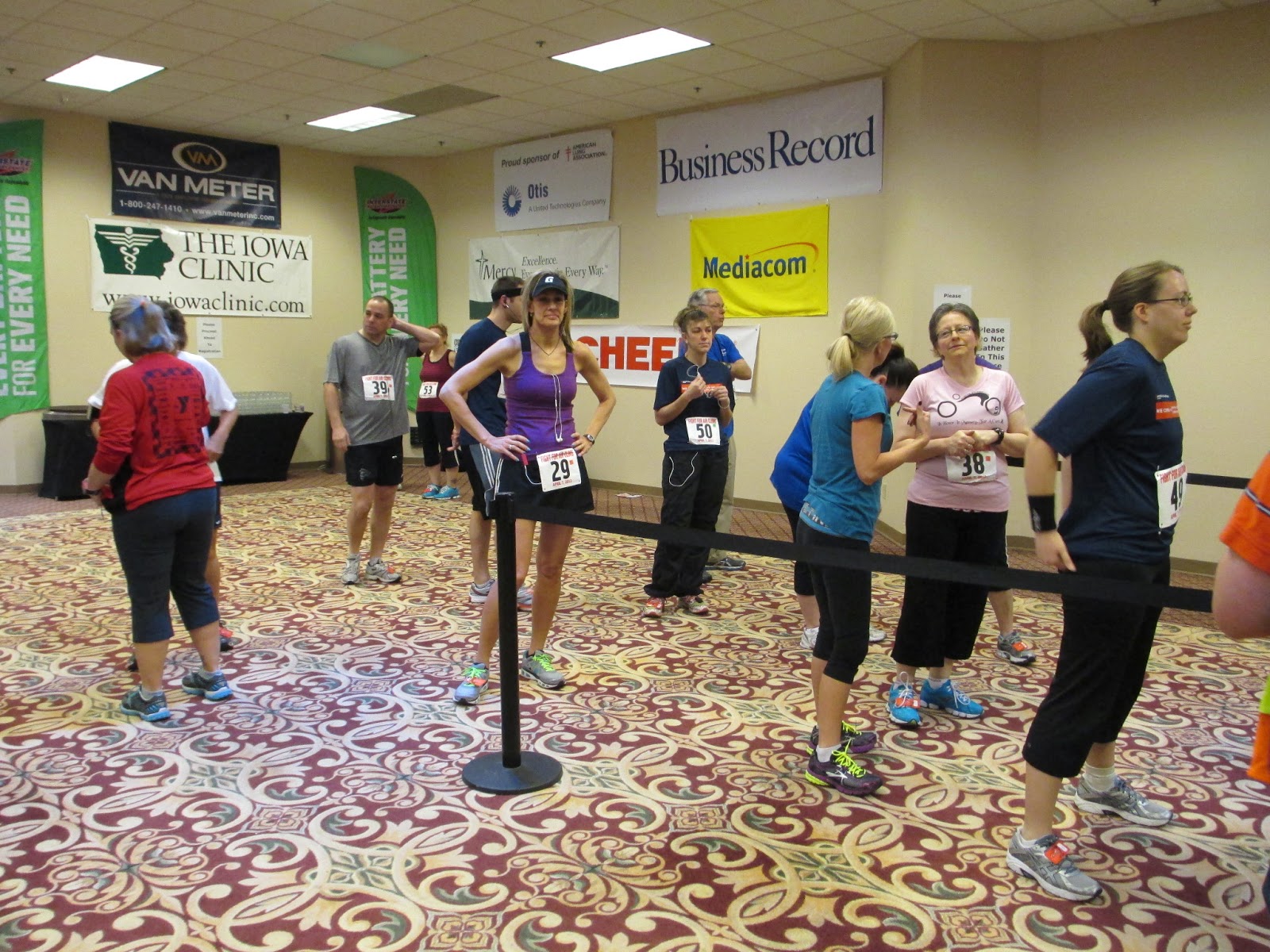 We were lined up in waves, and each wave had a different "departure" time, and there were 10-second intervals between the start times of each racer. I raced as an individual, but there were many teams from various clubs, businesses, friends and families.  There was a Kids Climb, where the youngsters could climb just one of the buildings.  There also was a Law Enforcement Challenge and a Firefighter Challenge...and these racers ran in their full gear (one firefighter I talked with told me his gear weighed about 40 pounds).  I was impressed with how well this was organized and the numerous volunteers were wonderful! 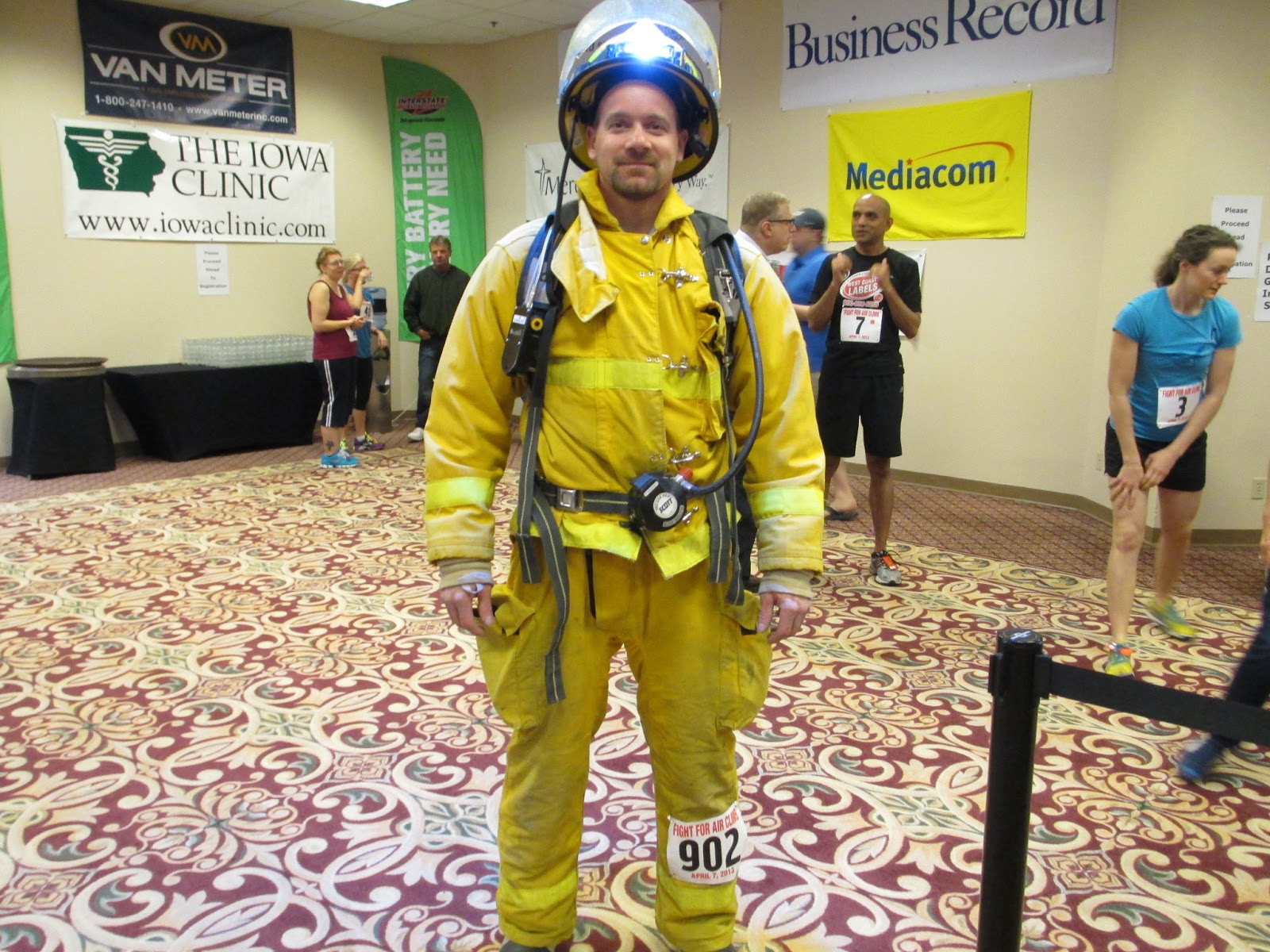 I think I was a bit too excited. I started way too fast on the first building, taking the steps two at a time and going pretty fast.  By the 8th or 9th floor, I slowed down.  I continued taking the steps two at a time, but didn't "run" these as fast. We were told there would be photographers taking our pictures in this first building, so I tried to smile when I saw the flashes of light.  There were numerous volunteers on each landing, cheering us on and handing out water bottles.  I made it to the top of the first building in 3 minutes, 39 seconds and quickly grabbed some water as I walked to the elevator, to head down and make my way to the second building.

The second set of stairs went much easier.  I took the steps two at a time, but on these steps I used the hand rail.  It gave me a little more balance, and something to "push-off."  I was very thankful not just for the volunteers and their encouraging words,but also for the fans blowing in the stairways!  There also were lots of posters with inspiring quotes to keep us motivated and moving.  I finished the second building in 4 minutes, 39 seconds.

I rode the elevator down, enroute to the third building, with 4 or 5 fellow racers, and all of us were laughing at each others' labored breathing and sweaty faces.  There's nothing like a stair climbing challenge to bond with strangers!

The third building was the tallest, almost twice as tall as the two previous buildings. Racers had the option of doing one building, two buildings or all three, but had to do them in sequence leaving the tallest building for last.  Ironically, this last building seemed to be the easiest. Maybe, by then, I was thoroughly warmed up. Maybe I was using the hand rail more effectively.  Maybe I knew how to utilize those 5 seconds on the landings between the floors better.  Whatever the reason, this last building was where I really rocked the stairs, finishing in 5 minutes, 40 seconds.

I didn't know what to expect going in to this race.  I am tall, I have long legs, and it's second nature to take the steps two at a time.  I had trained on my own stairs...taking those three at a time, able to complete 50 sets in less than 15 minutes.  I was hoping to finish in 20 minutes, but secretly was hoping to do it in 15 minutes...and my official time was 13 minutes, 58 seconds!  We didn't stick around for awards, but when I had this time sheet printed, it said I was in 1st place in the women's division, and also 1st in my age division.  There were many still climbing, so I haven't yet heard if my lead spot has held. 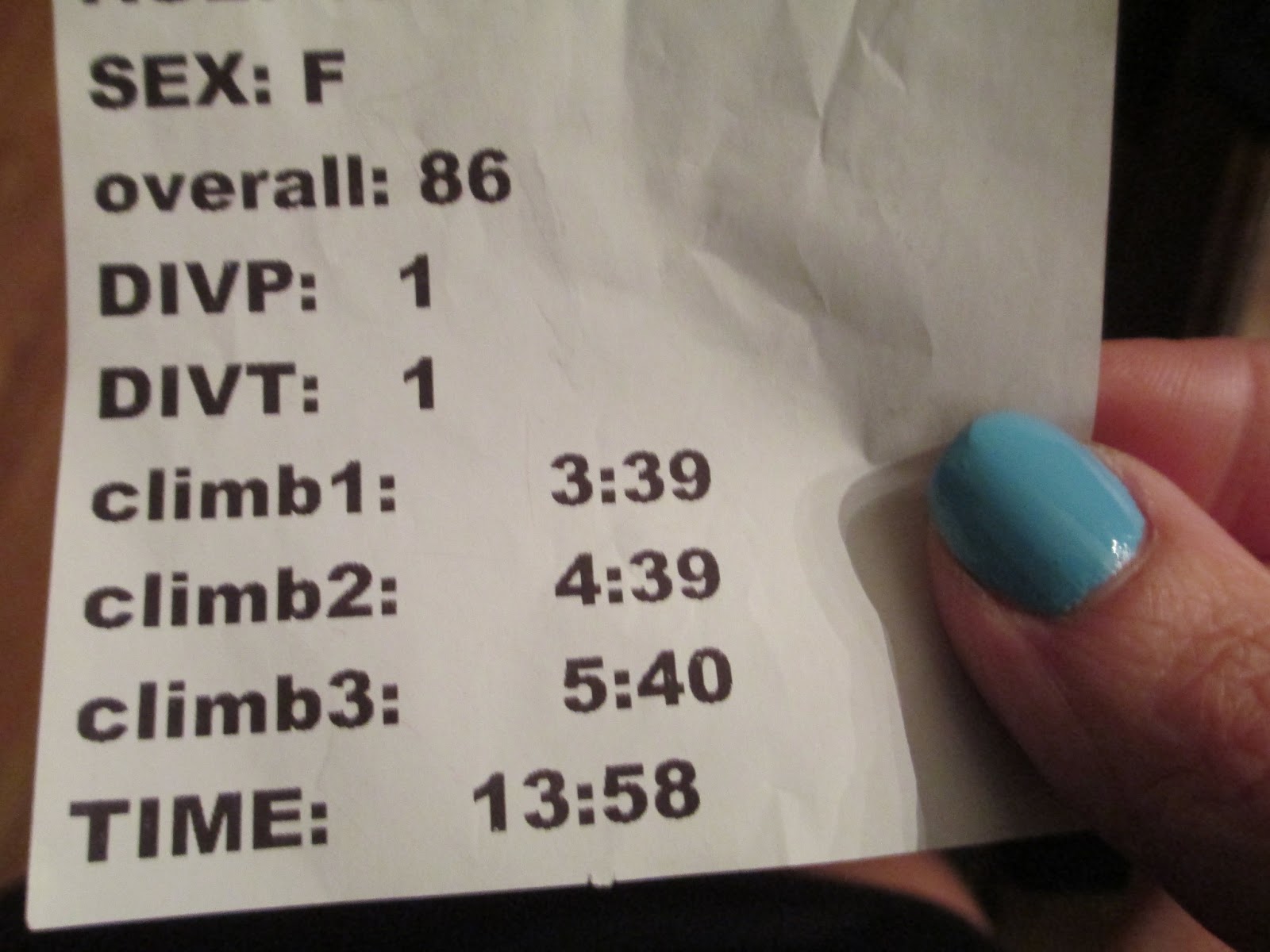 Like a lot of races, this started out with myself wondering why I wanted to take on this challenge.  Climbing steps (especially 66 flights of them) is not easy.  When my legs were starting to feel tired in the first building, I had a split second of doubt, wondering how much I would really need to slow down to finish and complete two additional buildings.  Then, the confidence returned, reminding myself that I have run 13 miles over the course of two hours without stopping.....this would be over much sooner than that.  My legs are strong from all the running I do, my lungs are strong...just keep climbing!  And that made me remember what this climb was all about, we were climbing for those who aren't able to breathe on their own.  I am lucky to have a healthy set of lungs, and it was an honor to contribute to this cause.  I not only look forward to returning next year, as an "alumni," but I plan to "step-up" my fundraising and surpass the minimum.  Fair warning to you all! 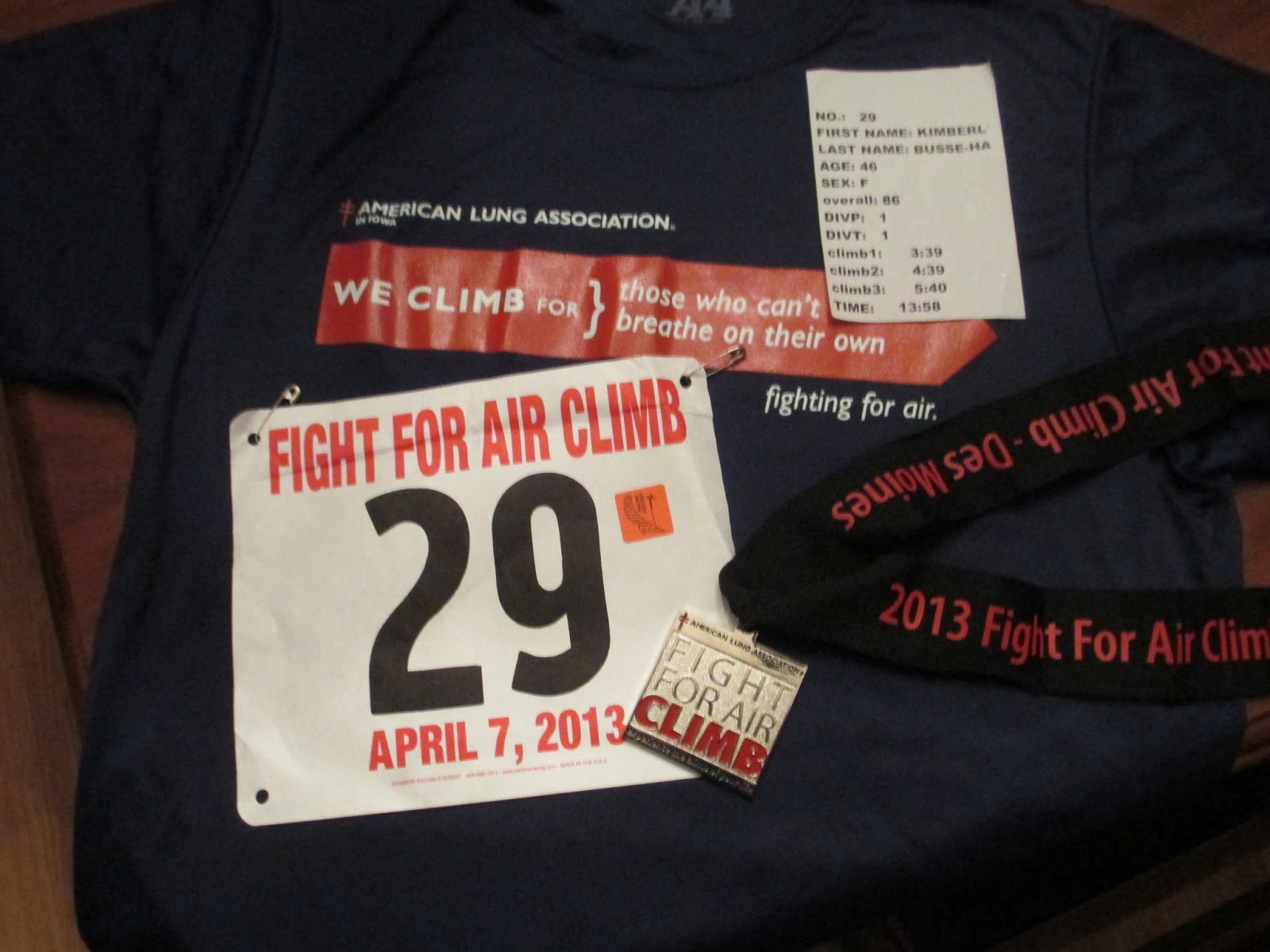 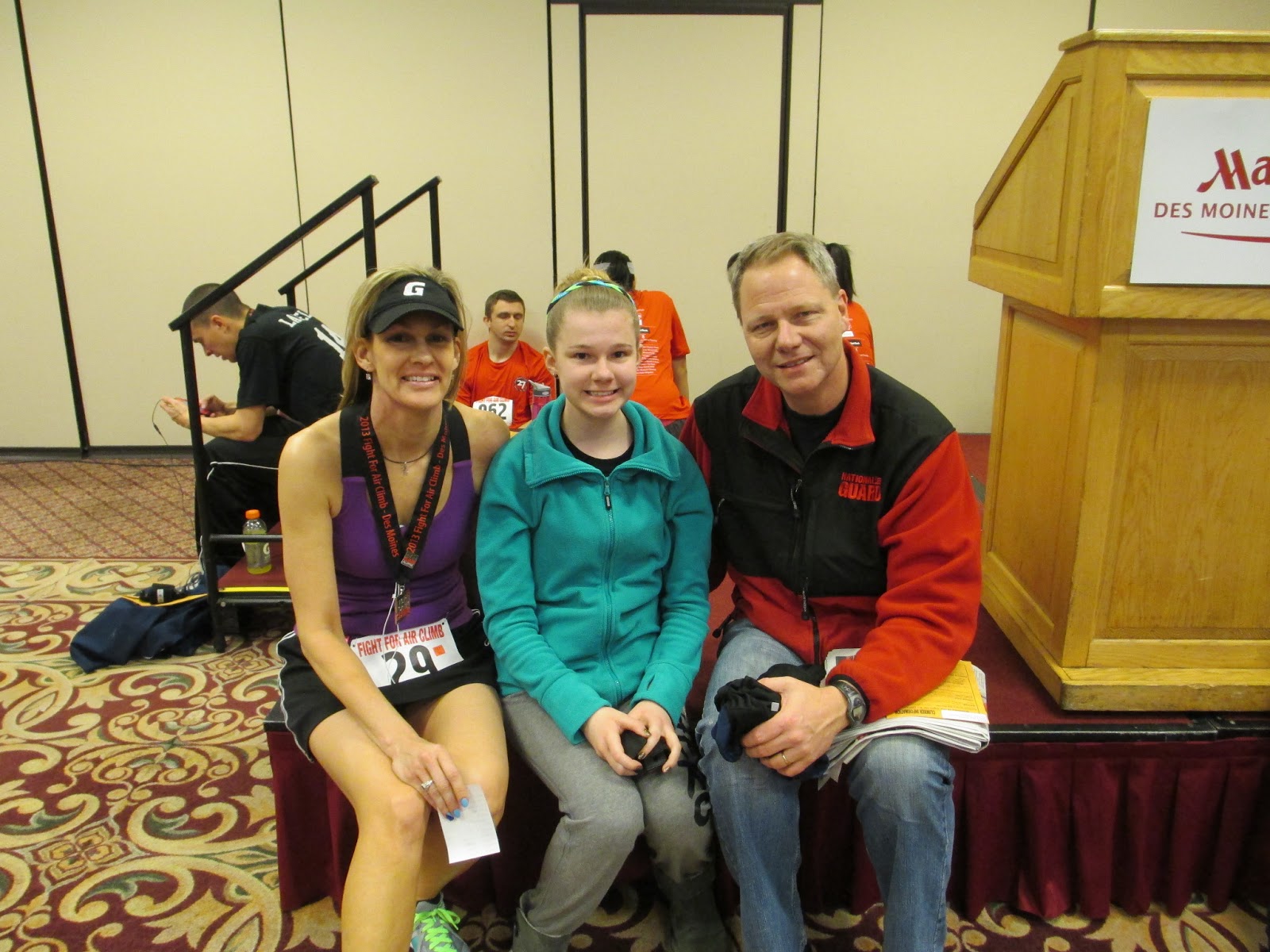 Have you ever done a stair climbing event?  Step it up, and give it a try!