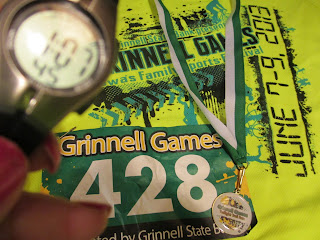 I have been running consistently for 8 years, and have run all distances up to 13.1 miles.  I have run fast (somewhat), and I have run slow.  I have run hills.  I have run in the wind, rain and snow.  I think of myself as a pretty well-rounded and experienced "veteran" runner.

Apparently, the running gods conspired and thought it was time to give me a really good challenge to test my endurance and stamina.  So, a trail run was presented to me.

The town where I live has an annual event each summer, the Grinnell Games.  They have a 5K, half marathon and a warrior run.  This year, they added a new event to the roster....a Twilight 10K Trail Run, and this trail run took place at a lake a few miles west of town.

We have had a lot of rain in our area of the state (central Iowa), especially in recent weeks.  The grounds and some of the beach surrounding the lake were under water following the most recent storm, causing the directors and staff of the Grinnell Games to come up with an alternate route.  Originally, the route was to take place on a trail path around the lake, amongst the trees and brush.  Some of the original route needed to be re-routed to the pavement drive, and a portion of the route was changed to an out-and-back leg off of the main road.

Having recently done a 20K race, I felt like I was in top condition for the challenge of a trail run.  This event was "only" a 10K, half the distance of the race I had just completed a week prior.  I was eager to do a shorter distance and test my skill on the terrain.  I knew there would be a few hills, but since I regularly train on hills, I wasn't worried.  I had heard to be cautious about wood ticks (YUCK!!!!), so I bought a new hat to cover my hair, donned my festive green argyle socks to keep my legs covered and wore a long-sleeved tech shirt. 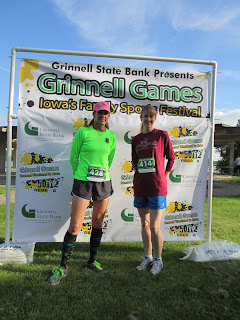 My friend, Kristin, also wanted to take on the challenge of a trail, so her and I drove together to the event.
We took a few pre-race pictures and I even had a guy with a video camera interview me about the upcoming trail run and my impression of the Grinnell Games. 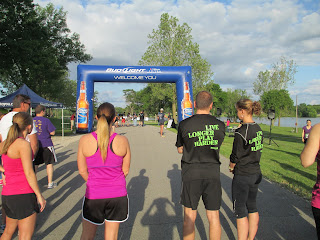 The race began after a great rendition of the National Anthem, performed by some local band students and bagpipers.  The first couple miles (or so) were on the paved drive.  And those first couple miles were hilly and curvy!  Having had some recent trouble with my piriformis muscle, I could feel some discomfort almost immediately.  I tried to go easy and not strain myself, but the constant uphill striding was disheartening. 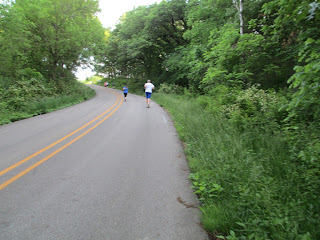 They had told us we'd turn off of the drive and be on grass "for awhile" and the second water station was the turn-around.  As soon as I turned onto the grass, I knew I was in for another bitter challenge.  The grass was tall, probably 6-8 inches in height, and very muddy in places.  This required a different kind of running than I was used to.  I needed to lift my feet higher than normal for each stride.  Hello, piriformis muscle!  Yes, I know you are there, and you can feel every one of these steps!

By this point of the run, I was pretty much by myself, all of the runners had spread out.  There were some painted arrows in the grass, but nothing else to really gauge my where-abouts.  Since this was the first year for this event, it was probably an oversight to not have mile markers, and that was a little frustrating.  I had to slow down and walk, quite a lot actually.  I had some idea how far I had been running but wasn't certain about the exact distance.  All I know is that I went for a very long time in the grass, brush, mud and rocks without seeing anyone coming back from the turn-around. 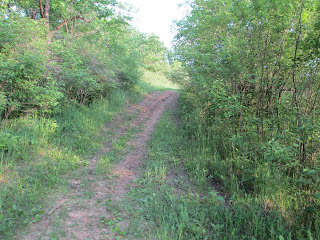 Since I did take time to walk, I took a few pictures along the way.  Unfortunately, several pictures didn't show up on the memory card, but I do have a few to document my journey.  It was difficult running on the terrain.  Many times, it was sloped sideways, almost at a 45-degree angle.  I was careful navigating my way, and walked when it looked dangerous.  I could feel my ankles constantly twisting and going sideways, and I didn't want to take any "heroic" chances and get injured by going too fast through dangerous territory.

It wasn't until I was probably half a mile from the turn-around that I finally saw some of the runners coming back.  Everyone looked very serious, I congratulated them on doing so well...and not many smiled.  Most of them grunted, probably because they were focused on their footing and trying not to fall.  It was funny seeing all the mud on everyone's shoes and legs.  I was really glad I'd thought to wear my knee socks.

Finally, I reached the turn-around and stopped for a few seconds to have some water.  The volunteers were very cheerful, and encouraging.  They asked me how I was doing, and I told them that this was the toughest race I'd ever done... last weekends 20K was EASY compared to this 10K.

So, I tossed my water cup and started to make my way back.  As I passed all the others coming towards me I clapped for them, and told them the water was just ahead.  One gal actually smiled, and said, "Thanks!"

This course was constant hills, on the pavement and off of it.  There was not really any terrain that was flat.  If I wasn't fighting gravity going uphill, I was fighting it on the way back down...and trying  to not go too fast for fear of losing my footing.  Even when there wasn't part of a hill to tackle, there was sloping terrain, slippery grass or sticky mud or wood chips.  Despite the constant awareness of my footing, I was able to look up periodically and enjoy the beauty of the leaves, the scent of pine trees and the sounds of nature all around me (I had left my music at home). 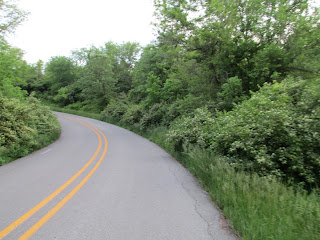 Once I finally made my way out of the brush and got back on the pavement, I felt like I had been set free.   A friend (volunteer) greeted me and told me I was doing great, and that lifted my spirits tremendously.  He told me I only had half a mile left to the finish line.  Even though there was a slight hill remaining, it was amazingly easy to sprint the remainder of the route.  I rounded the final curve and made my way to the finish line and was greeted by lots of cheers from the other runners and spectators.  The camera guy even found me in the crowd and wanted to do a follow-up interview (he didn't ask me for my autograph, though). 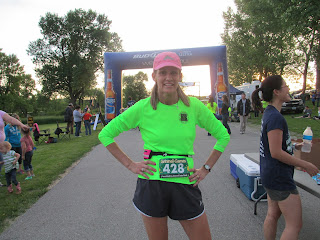 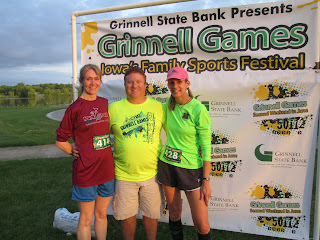 Even though I was really struggled at times amongst the course, I did enjoy this race.  I finished in 1:07:45, not great in terms of my "usual" 10K finish time, but I am satisfied with it.  I had to walk a lot more than I wanted to, but given my recovering piriformis muscle issues (and my lack of grace on uneven terrain), my finish time is decent.  I will take a slower-than-desirable finish time over an injury, any day.  It was a little frustrating never knowing exactly how far I had run or how far I had left to go, so I suggested they add mile markers next year. I actually had a moderate headache for most of the race...not sure if it was due to the new hat or if it was legitimately from something else...none-the-less, that made for some discomfort and was a distraction at times.

When I do future trail runs (because this definitely will not be my last!), I will train on actual trails for them, and possibly consider getting some trail shoes. My ankles were contorting in every direction while running, so I was thankful no damage was done.  My quads were quite sore the next morning, probably from the constant high-stepping through the tall grass and the gravity-induced "stomping" as I descended the numerous hills. 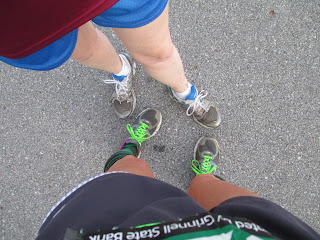 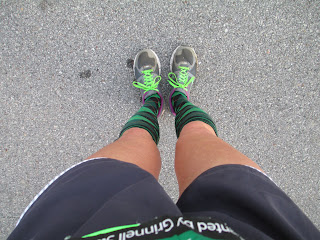 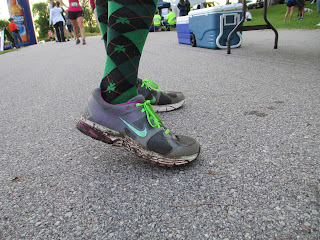 On a side note, I volunteered for the half marathon the following morning.  I ran it last year (a week after last year's 20K), and that was not a smart move in my running career.  Besides, having done so many races in the past 8 years, I think it's only fitting that I give back to the sport that has given so much to me.  I have been on the receiving end of numerous events, and none of these events would be possible without volunteers (many of which are runners themselves, sacrificing their run so others can do it instead).  The half marathon route goes right by my house, so I spent a few hours dressed in a glow-in-the-dark vest and acted "all official" re-routing traffic on my street corner. I also cheered every runner as they came by and gave them plenty of cowbell. 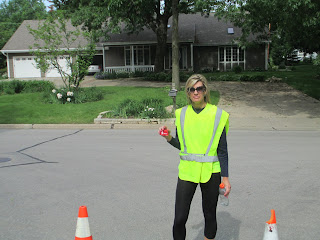 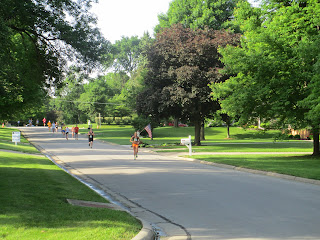 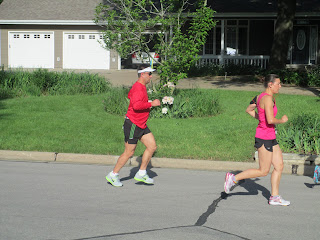 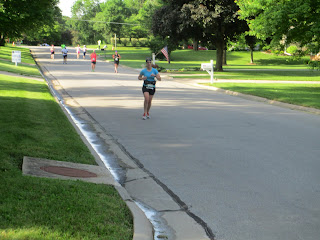 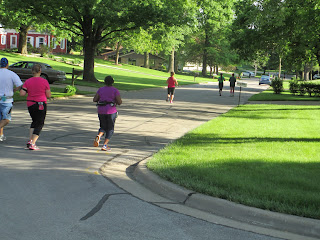 It was a great weekend!