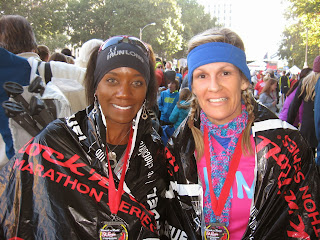 I have wanted to do a Rock'n'Roll event for a very long time.  I have wanted to do a destination race as well.  Almost a year ago, I started following a fellow runner on Facebook and we became (almost) instant running pals, and I have looked forward to meeting this gal, Fran, for some time.  Well, the weekend of October 26th-27th was a grand slam (of sorts), as I got to accomplish all three of these endeavors in the city of Saint Louis!  The Rock'nRoll event attracted a lot of runners to the city...and there were a few baseball games happening as well (can you say, World Series?).

Living in Iowa, the journey to Saint Louis took some planning.  Most of the races I have done have been within an hour or so of my house, not requiring too much travel time. With the exception of the Quad Cities Marathon (which ventured into Illinois through some of the course), all of my races have been in Iowa.  Not a bad thing, but I certainly have felt the need to run elsewhere.

The drive to Saint Louis from Grinnell took us about five hours.  The husband (chief driver extraordinaire) and youngest daughter were my travel companions. We arrived at the expo around 3:30 on Saturday and spent about an hour walking around and checking out the exhibits and vendors.

Sunday morning arrived with a 4:45AM wake-up.  The temps were in the 40's, so I had a long-sleeved (flannel-lined) tech shirt layered under another shirt.  I decided to rock the full-leg tights under the running skirt, and had the arm warmers, gloves and headband ready to go.

The husband and daughter dropped me off around 6:00 at Fran's hotel, and they headed off to find a breakfast place.  Although Fran and myself had never met in person, we have been Facebook friends for several months...and we instantly recognized each other as soon as I walked through the doorway.  A big hug, several laughs and we were talking like old friends.

We took a few pics, then headed to the start line.  The race was to start at 7:00AM, and at 6:30 it was still dark as night.  There were a lot of runners heading the same direction, so we had no problems finding the race course.

Our corral got called, and we were off and running.  The view from the start line was beautiful, we could see the Arch straight ahead of us and the sky was starting to brighten from the sunrise.  As we approached the first mile marker, we could hear a band.  This wasn't just a few guys with guitars, but a full band -- complete with a drum set, microphones, speakers and amps.

I had started my watch as we crossed the start line, and imagine my elation to see we had run the first mile in 7:15!  Fran and I had been chatting as we ran, so I hadn't been paying attention to just how fast we were moving.  Then I realized my watch was showing the actual time of day, NOT our race time,  Duh.  Fran is a fast runner, but I don't think even she could get me to master a 7:15 mile.


By the time we made it to the second mile, the sun had fully risen and we had complete day light.  The crowd of runners remained pretty heavy, but it wasn't too much of a problem.  I'm not really a competitive runner, but I do enjoy the race environment.  There's something about being in a group of fellow runners, all headed towards the same destination....it is invigorating! I love the shouts and cheers from the spectators, the fun signs, and the echoes of cow bells.


I have done numerous races, several have been with friends or with the husband.  It's kind of an unwritten agreement that we all start together, but eventually spread out and each run our own pace and then meet up at the finish line.  This was my first time actually running with a friend, talking along the way and not relying on the music from my Ipod to keep me entertained.

We kept a steady pace, just under a 10-minute pace, for most of the race.  Quite remarkable, since we were not only chatting for much of the run, but also tackling the constant hills along the route.  The hills weren't steep, but they were plentiful.  Since my marathon 5 weeks prior, my left Achilles tendon had been a little angry with me, and it was battling me on race day in St. Louis as well.

I have wanted to do a Rock'n'Roll event for a long time.  I love running, and I love rock-n-roll music. I also love traveling to big cities, doing a run while there was an added bonus.  This was a big event, and there were numerous photographers everywhere.  Hopefully, Fran and I kept them entertained with our silly poses!

Despite the chilly temps, I was never uncomfortable.  I stripped the arm warmers after the second mile, but the gloves stayed with me for most of the run. The water stations were frequent, so we had plenty of refreshments at our disposal.  The bands were great! There was constant entertainment and numerous spectators along the course.  We ran through several of the downtown streets of St. Louis, passing Busch Stadium, and ventured through some beautiful historical neighborhoods as well.

This was my first time running alongside a friend for the duration of a race.  Usually, I'm in my own world with my music playing.  I love seeing all the spectators along the route and sharing smiles and/or high-5's with them.  But running with a friend was so much better.  We were talking a lot, laughing at each others' jokes and comments, and getting better acquainted with each other as we conquered the streets of St. Louis enroute to the finish line.


Before we knew it, we had left the neighborhoods and were working our way  back to the downtown area.  Soon, I spotted the husband and daughter.  The finish line wasn't much farther.  Fran and I rounded the last corner and grabbed hands as we crossed the finish line in St. Louis. 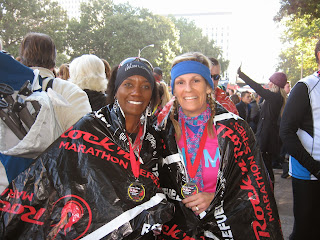 No, I didn't play any baseball while in St. Louis, but I did hit my first Grand Slam. Let's hope it's the first of many. 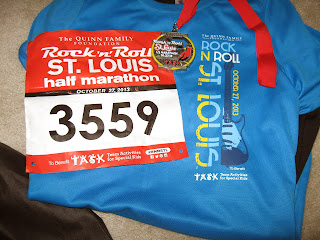 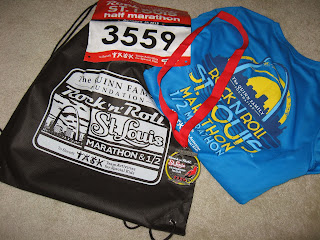