Running out of the Comfort Zone 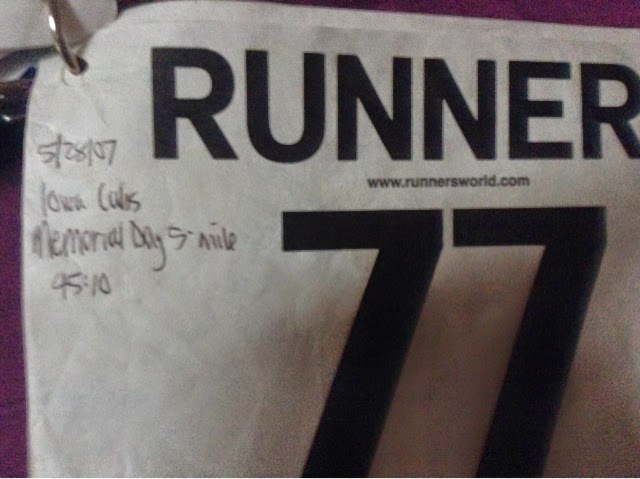 There was a time when I never would have imagined myself a serious runner.

I was one of those klutzy kids that was very skilled at tripping over non-existing obstacles, and was usually towards the back of the pack when it came to choosing teams in gym class. I was, however, somewhat talented with a pencil or paint brush, so my athletic skills (or lack there of) didn't bother me (much).

Fast-forward to adulthood. I did a few 5K's with friends, and then with the husband. I usually had to walk some of the distance, though.

Finally, I found the motivation to train for and run a complete 5K. It took a couple months, but I was able to do it.....I ran a 5K nonstop! It was a proud moment for this "non-runner" to cross the finish line of a real race knowing that I had, indeed, run the entire distance.

Fast-forward a few more years, and I was completely happy and content running those 3 miles. Never any less than 3 miles, but never any further. I acquired quite a collection of race bibs from numerous 5K's. My race times had progressively improved and I felt like I had made a worthwhile appearance in the local running scene.

I spent a few days being angry at the husband, and frustrated with myself. This race was going to be a total disaster, there was no way I thought I was capable of running five miles without walking some of it. My mind kept flashing back to all the previous races when I had to walk.   After having conquered several races where I was able to run non-stop from start to finish, I didn't want to go back to walking.

Finally, I realized that I should just run the first three  miles without worry (since I already knew I could go that far), and I could spend the next couple weeks trying to run a little farther on some of my runs. I probably wouldn't be able to run the entire 5 miles, but I could still make it to the finish line if I started off slow and walked periodically. Not my ideal scenario but, given my limited time frame, it would have to be my plan of attack.

Race day arrived, and I was a nervous mess.  The race didn't start until 10:00AM, and it was already feeling warm at packet pick-up an hour prior.  I tried to concentrate on stretching to take my mind off the five miles looming ahead of me.

I noticed a lot of "real runners," the people with expensive-looking shoes and fancy sunglasses. They all looked confidant and eager to sprint across the start line. They weren't nervous about finishing strong (or finishing at all).

Before long, it was time to line up. I was still annoyed with the husband. He is much more athletic than myself, he didn't have the fear of not finishing on that warm morning. He didn't understand why I was so worried about this race. To him, it was just a race, a fun race, it didn't matter how fast (or slow) we ran it. To me, though, it was all about NOT disappointing myself, and crossing the finish line with some dignity.

The gun fired and we were off and running.  It took a lot of effort to just run easy because so many others were running fast. I knew I needed to take it slow and conserve some energy, I had to resist the urge to follow the crowd and run my own pace.

Despite the warm and humid temps, we did have quite a bit of shade from the downtown buildings. I made it to the first mile and felt fine. I walked for a few seconds as I gulped some water from the  aid station.

The husband and I continued on, not talking (I was too afraid of getting winded), but keeping in stride with each other. We made it to the second mile, still feeling fine.

As much as I was annoyed that he was purposely running slower to stay with me, I did appreciate having him there. He probably knew better than to leave me in his dust. As we approached the water stand at the third mile, I felt both relief that I was not fatigued, but also apprehensive that I was about to pass my normal "finish line" and keep going.

So, we pressed onward. About halfway through the fourth mile it occurred to me that I had not walked yet (except for a few steps through the water stations). And I got the idea in my head that I kind of needed to use a restroom. As luck would have it, there was a public restroom right before the start of the fifth mile, so I took advantage of it.

Even though I didn't feel tired, I was certain I would be if I didn't take a break and walk a bit. After all, my body had never run this far before, I didn't want to risk anything. I told the husband I needed to walk for a minute. He reminded me that we were almost finished, why not just press on but go slow and easy? Frustrated, I told him to go on but I was going to walk. He relented, and we walked for a few minutes.

I don't know how it took me so long to figure it out, but I really didn't need to walk. I had run farther than I'd ever gone before, and had less than a mile to the finish line......why not just try to run the rest of the way? (duh!)

We broke back into an easy pace, and my attitude transformed as we finished the final mile. My anger and annoyance mellowed as we approached the finish line of that 5-mile race. The husband even pretended to trip, allowing me to cross the finish line first.

Our finish time was 45:10, a 9-minute pace. It turns out, I actually ran the 5 miles at the same pace I had been running most of my 5K's, and it really wasn't any more difficult, just longer. Hmmm. Getting out of my comfort zone wasn't so bad after all. Maybe I should have done it sooner.

I'm thankful for running away from my comfort zone, and I do my best to stay away from it now. How about you?