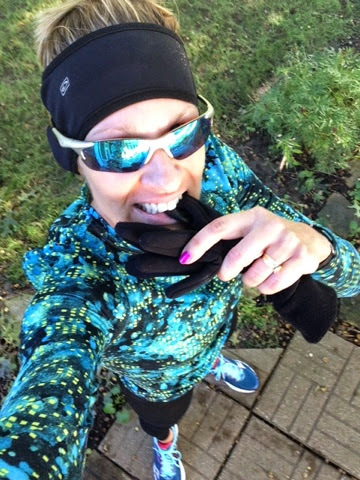 The IMT Des Moines Marathon is 4-1/2 weeks away. I am not in a panic (yet) as I push and grind through the final weeks of distance training.  For only having done one marathon, I feel like the training is pretty routine.  My mind and (for the most part) my body have embraced the aches, pains, guts and glory that accompany preparing for 26.2 miles.  The past 11 days, though, have been most interesting.

I ran the Park to Park Half Marathon on September 6th.  The distance is a no-brainer for me (usually), and I finished with a decent time. But I had some major pain along those 13.1 miles, mainly in the glute region and also in the hip flexors. The discomfort wasn't enough to make me stop, but it was ever-present despite the precautionary Aleve I'd taken prior to lining up at the start line.

I have wondered (several times, actually) if my form could have somehow changed in the eight years I've been doing distance events.  Back when it all began, I was doing two big races a year and not a lot of long-distance mileage between events. My running has evolved in the past couple years,though, and I am now doing several races each year, most of which are longer than 10 miles in distance.  I'm not necessarily running more often in my training (I'm still running only 2-3 times each week, plus a long run on the weekend), but my long runs have gotten (and stayed) pretty long (anywhere between 6-10 miles, depending on my race calender).

After Park to Park (as well as the the previous week's recovery from an 18-mile run), the pain in my glutes had finally reached the point of needing an intervention.  The day following the half marathon, I went to a different running store, seeking a second opinion on the shoes my feet required. I also asked to have my gait analyzed (something I'd never had done before).

The sales associate had me run barefoot on a treadmill, and stopped me after 10 seconds.  He gently told me, immediately, I needed a neutral shoe and the stability shoes I'd been wearing were wrong for me. Yikes. The stability shoes would be fine if I was only running short distances, but for the long distance races (and training runs), I really needed something different.  He also told me I was lacing my shoes too tight, and I seemed to have "long-legged-syndrome" (in other words, I was taking much too long strides). All of this he said to me in the kindest, most sincere manner possible. He disappeared momentarily and returned with several boxes of shoes for me to try on and test out on the treadmill.

I can't remember every brand or model we tried, but I decided on the Saucony Triumph 11's.  Not only were they very pretty, but they felt like a dream.

That was Sunday of last week. Other than a short (and easy) 1-mile recovery run that morning, and two miles of my weekly hill sprints on Monday, there was not much happening in any of my running shoes.  We had some rain and cold weather, and my body was still kind of achy, so the new shoes did not get any action until Wednesday evening, and then it was only a couple of easy-paced miles on a track.  The shoes felt great while running, but felt a bit "large" when I was walking.  I had worn my wool socks for the shoe-fitting, but the shoes felt like they needed to go down in size. I took them back to the store on Thursday, and exchanged them for a smaller size (and a brighter color).  I took them out for a quick tribute run (9.11 minutes for September 11th).
Saturday arrived, bringing with it the first (of two) 20-mile runs on the training calendar.  My friend, Barb, who also had run the Park to Park Half Marathon (and, consequently, was also having some recovery stiffness) agreed to run with me.  We set out at 5:45AM, dressed in full tights, headbands, gloves and long sleeves...it was around 40 degrees, still dark, and very chilly.

We planned to run a 5-mile loop, and return to my house for refueling. It probably was not the smartest strategy to wear my new shoes (practically right out of the box) for 20 miles, but I feared wearing the old shoes would be just as bad (if not worse).  We ran those first five miles at a pretty good pace, considering both of us were feeling tired, weary and stiff.  Barb had not run much since Park to Park either, so both her and I were pretty much in sync.

We made it back to my house in just under 50 minutes, and paused for a few minutes for a snack and water.  Even though the temps were cool, I was already feeling over-heated. It had been several months since I've done a long run in more than shorts and a tank top, apparently I needed a reminder to go with a couple light layers and not just one warm layer. So noted.

Typically, it takes 3-4 miles for my body to warm up and loosen up.  After five miles, though, I was still feeling a bit achy and stiff.  I had been hoping for all the glute achiness to magically disappear with the new running shoes. Although, some of the stiffness had remained, I was not feeling any worse...and I reminded myself I had several months (and years?) of stability-shoe-running to correct. It probably was not going to happen in five miles, or maybe even twenty. That was noted as well.

We headed back out, this time headed in a different direction on a different route.  Both of us were battling to make this run feel great. Inadvertently, the next five miles had several hills.  Not big hills, but several hills none the less. It wasn't until about the 10th mile when I finally noticed my glutes were feeling less achy, but both of my hips were pretty miserable.  A lot of thoughts were racing through my mind, most of which lead to the conclusion that 20 miles would not be a wise distance on that day.  I kept asking Barb how she was feeling, and around mile 10 she also admitted to feeling a bit fatigued as well.  Whew!  It was a relief to know I wasn't the only one struggling.

It was five miles back to my house, so we decided to take a short walk break.  We walked probably 10-15 minutes, and felt recharged.  We decided to run the remaining 4 miles or so back to my house and assess our situation then.  As much as I really wanted to do 20 miles, I just knew it would not be in my best interest.  We probably could have gritted it out and done it, but we decided to call it good at 15 miles.

Of course, shortly after Barb left, I had second thoughts on my decision to stop at 15 miles.  Even though I was feeling "recovered and recharged," I knew it was in my best interest to not push anything. In addition to my hips hurting, my shins also were feeling a little stressed. A result of the new shoes?  Hard to tell. I do know I've had some difficulty recovering from long runs recently, and I have a major race coming up in 4-1/2 weeks. This is not the time to do anything stupid, so I chose to err on the side of caution.  Maybe I was being too conservative, but I didn't want to risk further injury.

As it turned out, the husband and myself ventured to the Iowa/Iowa State football game a few hours later.  The Iowa/Iowa State rivalry is strong, and game day is always a gigantic city-wide party, no matter which college is hosting the annual game (this year the game was played in Iowa City).  In other words, any and all parking spaces were taken. After several unsuccessful attempts to find a spot somewhat close to the action, we settled on a spot at the bottom of a big hill, nearly two miles from the stadium.  Thankfully, I was wearing my post-run support stockings, but I had them "cleverly" concealed inside my fashion (NOT hiking) boots.

To call it a "hike to the stadium," is not an exaggeration. We didn't take the sidewalk, instead we went off-road.....weaving back and forth behind apartment buildings, through the woodland and brush, and along a railroad track. This was not for the rugged challenge of burning off a few extra calories, but in hope of finding a short cut. Had I not just run 15 miles a few hours prior (and dressed in proper shoes), this little off-road adventure would have been fun.  Instead, my already achy hips and shins (and add to the mix, my ankles) were severely hating their owner.
We made it to the tailgate party, saw our oldest daughter (who is a student at Iowa State and had traveled to Iowa City with some friends for the game) and eventually arrived at the game in one piece.  Thinking the worst was behind us, we found our seats and watched the game.  It wasn't until we were leaving the stadium that I realized my feet had been progressively swelling throughout the day (a result of the 15-miler, no doubt), and the boots (though quite fashionable) were suffocating my toes. And, we had a 2-mile hike back to the car. Downhill.

Most people dread hills, whether they're walking or running.  And, it's usually the up-hill they dread the most.  Not this chick.  It's much easier to fight gravity when you're going up than it is to fight it going down. Every step of that return trip was torture, my toes were stinging and throbbing the entire way back to our car.  The terrain was so rough, though, I didn't want to take off the boots and ruin my socks. Going barefoot definitely was not an option either. The thought crossed my mind, "This is so bad!  I'm probably going to lose a toe nail (or three) over this, and I'm not really having any fun in doing so!"  Then, a split second later, I caught myself wondering if I could count these four "bonus" miles as part of my training mileage? Hmmmmm....(What would YOU do?)

Anyways, we made it back to the car, and the boots were off within 30 seconds of closing my car door. Looking back, it actually wasn't so bad.  I did get some more cardio in, and all that extra "hiking" was probably good training on tired legs. I will be running 26.2 miles in a few weeks, after all, and I'm sure my legs will be tired for some of it.

What's next?  I am running the Capital Pursuit 10-Miler (in Des Moines) on Sunday, September 21st.  I have a 20-miler the following weekend.  Then, the taper begins.....