Not My Longest Distance, but 18 Miles is Still 18 (Freakin') Miles 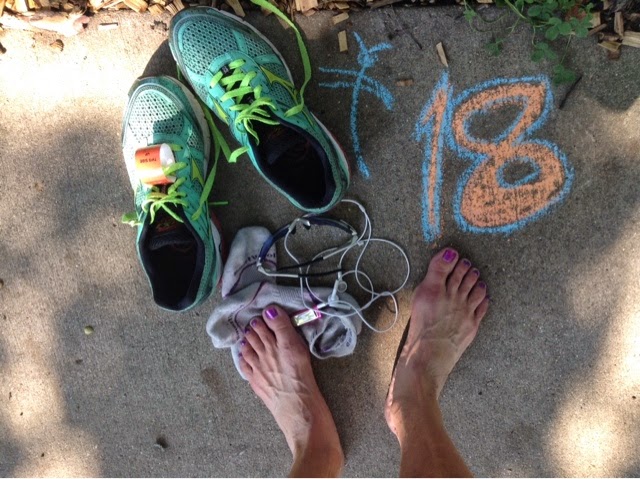 The IMT Des Moines Marathon will be here on October 19th, seven weeks until "26.2 Go Time." The training continues to go well and the mileage is getting long.

This past week, I had an 18-miler on tap. Even though this was not my first time running this far, 18 miles is still 18 (freakin') miles. Overall, these 18 miles went well, but there were some issues.

For example:
--Labor Day plans vs. 26.2 training. My training called for 18 miles, which was not going to happen in our destination town with my in-laws. Nothing against their small town, but it is even smaller than my small town (and I really didn't relish the idea of running 18 laps around it).

We planned to leave early Saturday morning (returning Sunday evening) for the 4.5-hour drive, so that left me with either Friday morning or Monday morning (both of which had rain and storms on the radar). I made the command decision to do the run on Friday morning, which actually worked well with my work load at my job. I didn't want to risk pushing it back to Monday, for fear of the inclement weather predicted. Also, I have a half marathon scheduled for the following weekend and want (and need) plenty of recovery time following these 18 miles.

--Dwindling daylight and continued hot temps. It is best to get started early with long runs, and get a few miles finished before sunrise, if possible. It was really dark on Friday morning. It had rained over night and it was still cloudy. I didn't leave the house until 6:30, but probably should have left earlier. Although the air was quite humid, the temps were comfortable and there was a cool breeze out of the south.

--Fueling. Oops. I had my usual oatmeal for breakfast, but kind of forgot to have fuel on hand. Actually, I did have some "left-over" energy chews. I had used these most of last summer, and must have eaten one chew too many at some point because they almost make me gag now. I prefer gels, but had forgotten to stock up, so the chews were my only option at 6:30 in the morning. Ugh. Bottom line, they did the job, but definitely weren't my fuel of choice.

--Excessive boredom with my (numerous) routes. Although I have a large variety of routes (with a large variety of distances), they all start (and stop) at the base of my driveway. Our house is situated on a hill, so every run either starts (or ends) with a climb.

So, what was my 18-mile strategy? I started with a 5-mile loop, hoping to get loosened up. I planned to swing back to my house, to grab a drink and refuel. Also, the youngest daughter would need a ride to school.

I made it back in 47:19, a little less than a 9:30 pace (a tiny bit faster than desired for a long run). The husband offered to be the chauffeur, so I took a few extra minutes and stretched the muscles. I also contemplated changing clothes because I was so sweaty.... but opted to just stay in the sweaty duds and get back outside.

I chose a different route for the next five miles, but still planned to loop back to the house for more water and fuel before continuing on. The first five miles of the day felt slow, but miles 6-10 felt better. It was getting hotter with each mile, though. The sun had emerged from the clouds, and had climbed higher in the sky.

I made it back to my house in 51:04 (right at a 10-minute pace, a little slower than the previous five miles, but also in warmer conditions).  My pace was doing great, but my mojo was dissipating. I ate a couple more energy chews (yuck, choke, gag) and grabbed more water. I really wanted to change my clothes, but decided to just change-out the socks instead. Ten miles completed and I still had eight miles remaining.

Suddenly, I had a light-bulb moment. I decided to drive to a nearby neighborhood. There's an easy 2-mile route that I frequently run (in various combinations). If I parked my car on the route itself, I wouldn't need to loop back to my house for water/refueling (and I wouldn't be tempted to make the pit stops longer than necessary). I could run four loops of this route to complete the final eight miles.

Car parked, watch restarted, I was off! It really felt great (emotionally) to not have to think about the remaining miles. Granted, I choose to break up my long runs into several shorter increments because that is what works for me. Mentally (and physically), I don't "need" to run the entire distance nonstop to know I can do it. Also, in this kind of heat, I don't want to be several miles from my house in case there would be an unexpected problem. Although I usually choose to loop back to my house, it was liberating to do things differently for the remainder of these 18 miles.

I made it around the first 2-mile loop (finishing miles 11 and 12), and decided to reverse directions instead of stopping for water. I felt fine (though sweaty), and wanted to keep moving. The second loop (miles 13 and 14) also went smooth.  Bored with my new route (already!), I thought about  changing things up when I pulled over for water.

This route was near a recreation area with a trail around several softball, baseball and soccer fields. I decided to run out there (approximately one mile) and then finish with a final 2-mile loop (on the other route), and then I could run a shortened loop for the final mile.

I ate the remaining energy chews and finished my water, dried off (again) with the beach towel I found in the trunk, and headed towards the softball fields. Halfway around the trail, I got that "feeling" that I might need a potty stop. Great. Once the thought of potty-stopping enters my head, it doesn't leave until the said potty does. Fortunately, the public restroom was unlocked, so all was fine (except I accidentally turned off my music instead of stopping my watch). (Whoops)

Mile 15 seemed effort-less, but by mile16, I could tell the heat and humidity were becoming a factor.  I didn't feel fatigued, but I could tell my energy level was going south. I stopped back at the car, finished off the water, dried off one more time, and continued on my quest to finish the 18 miles.  I had a mere 1.5 mile remaining, so I knew it was as good as done. I just had to go through the motions and finish.

I did a few intermittent walk breaks, and had to keep wiping the sweat off my face with my already soggy shirt.  As I have said before, I have no shame in walking briefly, especially over the course of 18 miles.  The 20-30 seconds of "lost" time is usually cancelled out with the renewed energy it gives me. Besides, this is a training run.  I'm training my body to run far, on tired legs.  There is no crowd of spectators to impress, I don't earn a medal for non-stop running, and I know to respect the heat and humidity.

Finally, I made it back to my car.  Although I was a massive sweaty mess, I felt great.  I had conquered 18 miles!  My total time on the watch was 2:54:14, a little over a 9:30 pace (still probably a little faster than desired for the distance and weather conditions). Since I forgot to stop my watch for the potty break in the park, I paused it for about 30 seconds when I resumed running...so my actual "running" time is an approximation (and I'm OK with that). This is training, after all, and not the real race. 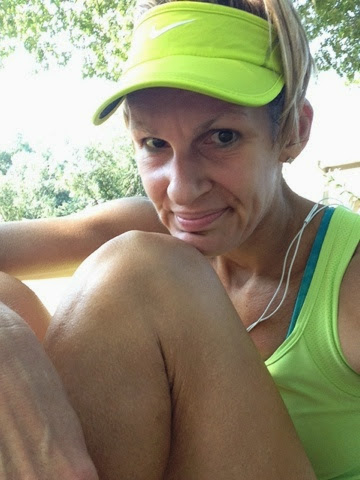 Over all, I am happy with this training run.  I get frustrated that my pace is "slower than normal," but I keep reminding myself that I need a slower pace for long distances.  I'm used to a 9:00-9:30 pace, but that's for shorter distances. A 10:00 pace is decent, especially for a humble runner who is not blessed with exceptional speed to begin with.

Where do things stand?  My marathon is seven weeks away, giving me about four remaining weeks of hard core running.  This week is a much-needed recovery week, with a half marathon on Saturday (yes, a 13.1 race is actually considered a recovery distance at this stage of 26.2 training). The following week, I have a 20-mile long run. After that, another recovery race (10 miles), and then my final 20-mile run a week later. Then it's Taper Time. YIKES. It will go fast (the time, not the running LOL).