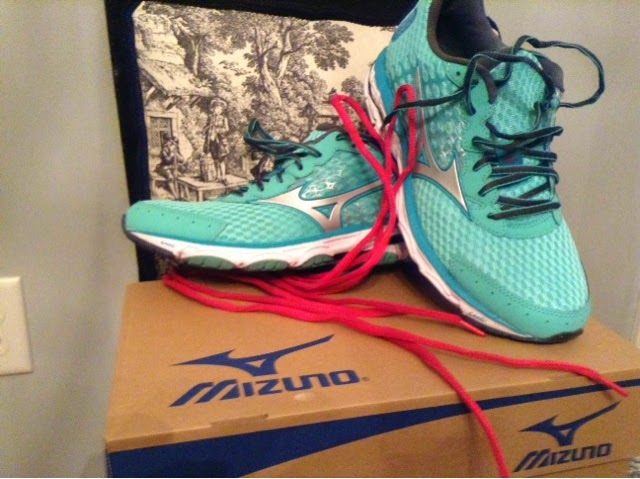 Last summer, I started noticing some tightness and strain in the buttocks region. I never quite surmised if it was the upper hamstrings or lower glutes. I just knew it hurt after almost every run, no matter the distance.

I was being a diligent marathoner-in-training....foam rolling (frequently), speed work, cross-training and respecting my rest/recovery days. I even had a handful of PR's and some fast (for me) finish times. But my tush was in constant turmoil.

Fast forward to now...and these problems are still persisting. I have scaled back my mileage for the "off-season," running only 3-4 times per week, and going no farther than 5-6 miles on my long runs. I am cross-training like a badass. And I am foam-rolling and stretching (probably still not as much as I should, but I am doing it more than ever before).

So, what gives? I've been trying to transition to neutral shoes (Saucony Triumph 11's), per the advice and counsel from a gait analysis in September. The new shoes stayed in their box until after my marathon (IMT Des Moines Marathon, October 19, 2014), but I have worn them for most of my running since then....and I am still not in love with them. My gut has been telling me that maybe the neutral shoes really weren't the answer....maybe my stability shoes (Mizuno Wave Inspire 8's) were simply past their prime. Even though I had rotated other shoes with them (and they still felt great!), they had seen me through two marathons, several half marathons (10?), and hundreds of miles in between. 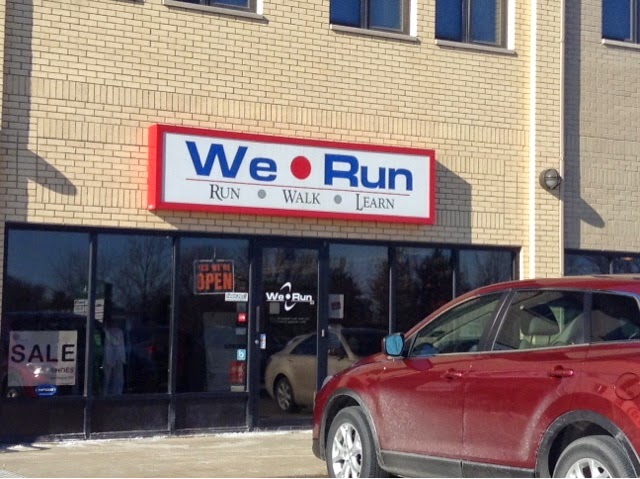 Eager for another opinion, I headed to a new (to me) specialty running store, We Run (http://www.werunllc.com/). Any runner in the central/eastern part of Iowa should make the trek to North Liberty and check out this place.  I met with the owner, Kris Tharp, on Sunday morning, following a We Run-sponsored group run. And, boy-oh-boy did she take care of me!

Kris asked me about my running...frequency, distance, races, aches and pains, etc. I showed her some of my shoes (Mizunos Wave Inspire 8's and Nike Structure 17's) and she immediately asked if my piriformis problems were on my left side, because the left outer sole was worn much more severely than the right shoe. Apparently, I have been shuffling my left foot more due to my limited range of motion. Huh (and I thought it was just my natural klutziness).

She sized my feet, and noticed how my size actually shifted slightly depending on how "tall" I was standing. 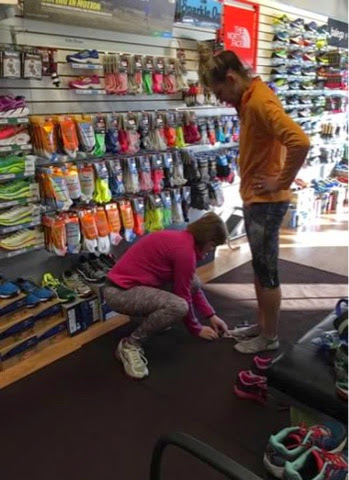 I also showed Kris the Sauconys, the shoes that do not seem to like me any more than I do them. She asked me if I wear them with orthotics....and I replied, "No." She said I have a very narrow heel, and wondered if the Sauconys were giving me enough support. 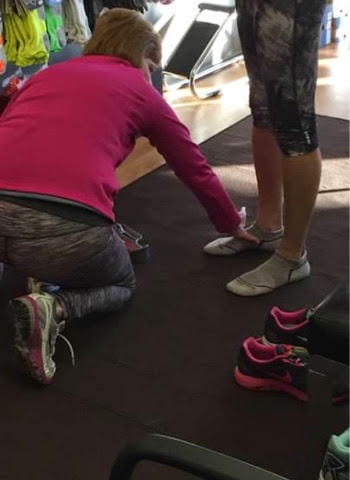 She pointed out that my ankles were substantially lower on the insides of my legs than they were on the outsides, and as I stood in my stocking feet I was constantly shifting and "correcting" my stance. She also caught me standing with one foot "casually" turned outwards...a common habit of pronators. (#busted) 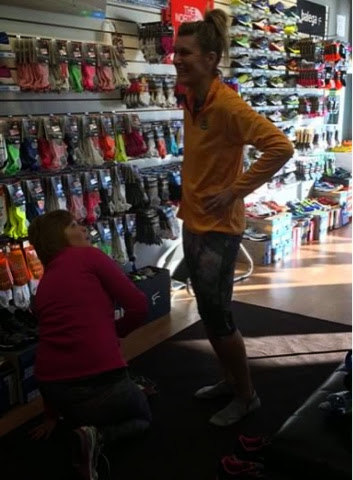 She talked briefly (without getting too technical) about the shoe drop (the difference between the drop of the toe vs. heel). The lower the drop (8MM-4MM), the more neutral the shoe. She asked if I noticed a lot of strain in my glutes when I ran in the Sauconys (Holy YES!). They have an 8MM drop, so my foot actually is fairly "flat" (or neutral, if we're talking shoe talk)...similar to being barefoot. Then she had me walk in my stocking feet....and said she could easily see my feet over-pronating.This is all stuff I knew, but having her explain it in such simple words really made it easier to understand.
Based on  my blatant pronating, Kris recommended a stability shoe. There was a selection of Mizunos, so we started with those. She had me try the Wave Inspire 11's, and I was instantly in love with them. They were the most recent model of my "tried and trues." Next, we tried another Mizuno (I think it was the Wave Paradox). Kris called this a support shoe (different from a stability shoe). That one felt great, also. 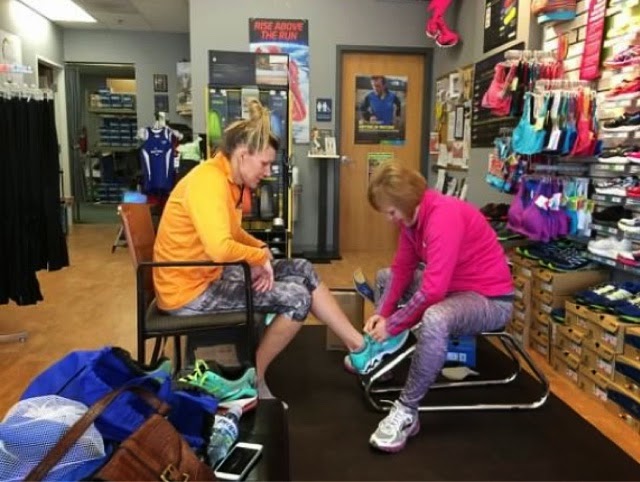 Next, I took them for a quick spin on the treadmill. The  Paradoxes weren't as easy to run in as the Wave Inspires were. Kris told me to try to run tall, like someone was pulling me up by my pony tail, and to run as "quietly" as possible.  Again, the Wave Inspires felt better, and the Paradoxes felt heavy, and didn't feel as flexible. She told me I was making more noise with the Paradoxes, too. 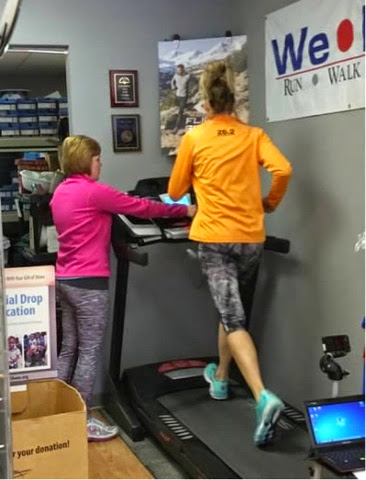 Kris brought out a pair of Brooks to try. I can't remember what model they were. They felt good, but I still preferred the Mizunos. So, the Wave Inspire 11's were the ones that went home with me.

Have you ever been professionally fitted for running shoes?  It's really worth the extra time! Whether you're just beginning to run or are a seasoned marathoner, getting fitted is important. In recent years, as I have upped my mileage (and my distance races), my needs have changed. I seem to need more arch support (not just in running shoes, but in "street" shoes as well). Also, be cautious in buying shoes online. Even the exact same name brand and model may vary, depending on which warehouse they come from. Two "identical" shoes of the same size may not give you an identical fit. Kris reminded me that most running shoes are good for anywhere between 400-600 miles, but that will also vary amongst runners. I keep a log of all my miles, but not for each shoe (I rotate old shoes with my newer shoes, and use the older ones for short runs occasionally).

How often do you get fitted? Do wear the same shoes for every kind of training run? And, most importantly, do you know when it's time to put them to rest and replace them (I need work on this one)?