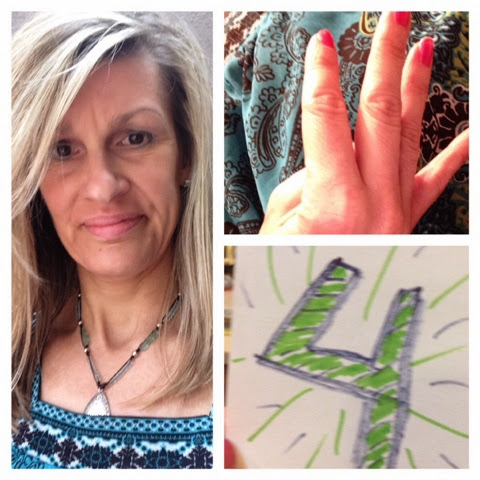 Here's a fun little game I saw on another blog recently....

4 names I've been called
--Kimberly (duh, my given name), but usually only my mother calls me by that name (or phone solicitors)
--Kim (the obvious nickname), apparently a popular name in the 70's. There were three other Kim's in my graduating class (of 150 classmates). As a child, I could never find a souvenir license plate with my name on it when we traveled, because all the other Kim's had gotten there ahead of me
--Rimry (the husband's version of Kimberly), usually said in a high-pitched, silly voice
--Mom (the three kiddos, when they actually want my attention or need money), usually in a strained, ticked-off voice

4 jobs I have had
--Counter Girl at KFC-my first job, it got me through high school (and since then, I will not eat the gravy because I know how it's made and what's in it)
--Test Scorer for ACT-you know those standardized college-entrance tests?  I had a temp job (just after graduating from college) scoring/grading "written" math problems on those tests
--Assistant Manager at Thom McAn Shoes-another job following my college graduation, I developed strong leg muscles from all the kneeling and squatting, and learned a thing (or two) about how shoes should fit
--Bank Teller-probably my least favorite job of all time. We were expected to dress like professionals, but were paid barely above minimum wage and had to deal with rude people who were embarrassed by their over-drawn bank accounts

4 movies I've watched more than once
--Citizen Kane-a classic. I was a Communication Studies major (emphasis in broadcasting & film), and this movie was often referred to for its storyline, cinematography and beauty.
--Harry Potter and the Prisoner of Azkaban-a modern-day masterpiece. I LOVE all the Harry Potter books & films, but this one is my most favorite.
--Aladdin-a work of absolute comedic genius. I love anything Disney, but Robin Williams made this movie so much more than just a cartoon.
--Schindler's List-a beautiful piece about a horrific event. This film left me raw with emotion....sadness for the loss of life, disgusted with the brutal abuse of power of one man, but also humbled by the compassion and generosity of another

4 books I recommend
--The Help-a great story with a lot of dry humor and wit.
--The Harry Potter series-I'm not really into witchcraft or wizardry, but these books tell a story about good vs. evil, and using your "magical" gifts for the benefit of others
--The Da Vinci Code-I'm a self-proclaimed art geek, and have a pretty deep interest in religion; this book was an awesome mix of both worlds, with a fast-paced twist of adventure
-- Dr. Seuss anything-I liked these books as a child, but really grew to LOVE them as a parent

4 places I've lived
--Iowa City, IA-Go Hawks!  The husband and I met while attending the University of Iowa, and lived there for a few years after we were married.
--Okemos, MI-Go Spartans!  Okemos is right alongside East Lansing, which is the home of the Spartans. I may be a loyal Hawkeye on game day, but I had a small green and white blood transfusion while living in Michigan.
--Boardman, OH-I lived there for four of the longest weeks of my life, trying to be a door-to-door (book) salesman one summer. Great town, but my memories are clouded by the horrible job I had.
--Grinnell, IA-yes, another town in the Midwest. Ever heard of Grinnell College? It's a few blocks from my front door.

4 places I've been
--Cancun, our honeymoon spot. White sand, clear water, hot sun. A beach-lover's paradise.
--Washington, D.C., our nation's capital. I wish we could visit this great place more often, it's rich with historical stuff and beautiful monuments.
--Disney World, heaven here on earth. I didn't visit Disney World as a child, but we've taken our kids there too many times to count. It's always their vacation destination-of-choice, even as they've gotten older.
--Hollywood, CA. My sister and I did a tour of celebrity homes, took a walk on the Walk of Fame, and went to a taping of Two and a Half Men. Total fun, but mucho pricey to live there.

4 places I'd rather be right now
--On a beach, with my feet in the ocean water.
--In a race, making small talk with fellow racers.
--Having dinner with the entire family (it's rare that we're all home at dinner-time these days)
--Laughing with my friends

4 things I don't eat
--salmon (in any way, shape or form)
--bananas (unless they're baked in bread or muffins)
--candy corn (kind of a terrible waste of perfectly good sugar, if you ask me)
--pickles (I'm gagging just thinking of them)

4 things I'm looking forward to this year
--running my first Ultra (50K) in July with a bunch of crazy gal pals (most of whom I haven't met in person...yet)
--doing another marathon!
--our son graduates from high school in May!
--taking on cycling, and doing my first duathlon


So, there you have it! Anything else you'd like to know?