A lot can happen on a Wednesday evening, especially after a busy morning (doing speed work on the track) and working most of the day. How about knocking a couple "bonus miles" at a group run? Works for me! Have you ever done a group run? I don't have the opportunity to take part in them very often, but when I do hook up with a bunch of other like-minded people, it's always a great time.

There's a nearby running specialty store that offers several group run opportunities each week. Everyone meets up, signs in (so there's a record of who all is participating in case someone may need assistance) and we all head out as a group. These runs usually are on an asphalt trail, on an out-and-back format. The participants run as far as they wish (most of the evening runs last about an hour). When everyone meets back up at the store, there's usually several that go have dinner.

I became acquainted with Kris, owner of We Run (located in North Liberty, Iowa), back in January when I was in search of some solutions to my on-going shoe problems. My friend, Paula (who lives near the store) invited me to come up for a group run, and afterwards Kris worked with me on getting me fitted for some new kicks (the story is HERE).

Fast forward to March, another friend (Barb) and myself took part in the We Run-sponsored Lucky Run...and I also bought a second pair of running shoes from the store (Mizuno Wave Inpsire 11's, the same model as the January purchase but in a different color). Barb and I also ventured back to North Liberty for a couple other group runs in the spring and summer.

Fast forward (again), and we are now in August. Although my mileage has  been on the conservative side in 2015, I haven't exactly been sitting very still.... and I have logged plenty of miles. There have been a some half marathons, a full marathon, and an ultra marathon. And several other races of shorter distances. Yadda yadda yadda.

All of these have been run in the two pairs of Mizunos, and recently I have noticed that my hamstrings have been a little angry (again). I was attributing it to the past 6-7 weeks of racing (which included the marathon, the ultra and also a duathlon), not really noticing the shoes were on the verge of wearing out and not giving me the support my over-pronating feet desperately need.


I finally had a free Wednesday evening, so the husband and I headed to North Liberty to do some group running. A neat feature, and a HUGE perk to going to a store-sponsored group run, is getting the opportunity to periodically sample shoes from various companies. When I say "sample shoes from various companies," I mean you get to take the shoes out for an actual run (not just a couple laps around the parking lot). The Brooks representative was scheduled to be there this week, and I was eager to test out a pair of their shoes.

The Wednesday group runs start at 6:00PM, so we arrived around 5:45 to have a few minutes to get situated.  The Brooks guy had a big selection of shoes to choose from, and Kris helped me find a stability shoe in my size (the Adrenaline GTS). There wasn't a ladies shoe in my size, but we found the men's equivalent. I put on the shoe and, immediately, it felt like I was walking on pillows!


We headed outside, and the run started a few minutes later. I had also done a track workout earlier in the morning, so I did not plan to run very far (only a couple miles).   My hamstrings have been a little achy, so I was leery of going too far in "strange" shoes, but the Brooks Adrenalines really felt great! 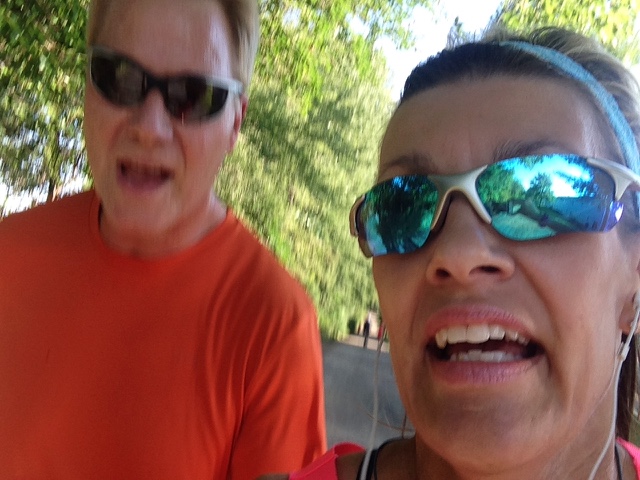 Pat and I were the first ones back (since we'd only run about two miles). I really was impressed with how good the shoes felt, especially since my body was already a little tired from the morning's workout. The hot weather added to the challenge, as well as the rolling hills of the trail. But my feet and legs felt pretty good in the test shoes.

Back at the store, Kris brought out some Mizunos, Asics, and Brooks shoes for me to try on (after I had a few minutes to cool off). Although the Mizunos had been a great shoes for me, it seemed like the support just wasn't enough. Also, the soles were showing some serious signs of wear and tear, especially under the balls of my feet. Kris explained that although both shoes had about equal support, the Brooks had a little more cushion and didn't usually need any breaking-in. The Asics felt alright support-wise, but the Brooks felt a little better. I also tried another Mizuno (Paradoxes), but the padding under the ball of my left foot hit me in a strange spot....so those went back in their box.

I also have been dealing with a bit of plantar fasiitis this summer, nothing chronic, but an issue none-the-less. I feel it mainly under my left heel, and sometimes at the base of my second and third toes. Kris suggested that the Brooks (with their ample cushioning) may be my best option right now until the plantar fasciitis is eradicated, and I agreed.

So, the Brooks Adrenaline GTS 15's are the ones that went home with me.

Back home, I took them out for a walk with Max. Heaven, I felt like I was in heaven! I'm excited to log a few miles in them soon!


What do you think of trying out different brands and models of shoes? It's great if you can find the perfect shoe for you, but I have learned that my needs are constant changing and evolving. I have been doing a lot more mileage in recent years, not necessarily running more frequently but definitely running longer in my training for longer distance events. Also, most manufacturers are constant changing and improving their various models of shoes.....I like to keep experimenting with different brands/models to see how they feel and work for me.

Who knows? There might be a "perfect" shoe out there for me, somewhere. If I keep looking, maybe I'll eventually find it. In the mean time, I'm keeping an open mind to what's available.

How about you? Got a favorite brand/model? Do you experiment with other brands/models?