Is it really time to start anew?
A new year often brings with it new goals, new events, new friends. And, probably at least one (or several) new pair(s) of running shoes.

But let me digress. This past year was busy and full of many awesome memories made.

Back in early February, I set out to make 2015 a year of new races and experiences. Since I live in Iowa, the majority of my races are on Iowa soil (and/or Iowa streets), and I tend to do a lot of the same events each year. I vowed to do at least 15 "new" events in 2015. This could involve new (to me) events or races that had different routes than in years past. I barely made it, finishing my 15th new event on the morning of New Year's Eve while on vacation in California. Whew!

This was not a year free of injury, unfortunately. After several years of battling Piriformis Syndrome (literally, a royal pain in the buttocks), I was diagnosed as having Hamstring Tendonitis (also a pain in the buttocks region) in my upper left hamstring. The two "conditions" kind of feed off each other. I have been though more physical therapy, and finally have a grip on the proper exercises, stretches, and warm-ups/cool-downs needed to keep the stiffness and muscle tension under control. All is good. Rather than chronic, these conditions are very manageable as long as I keep my mileage reasonable and allow myself proper rest and recovery following each training cycle. Common sense prevails.

Imagine my surprise to have a new injury make its appearance around mile 10 of the Dam-to-Dam Half Marathon. I had heard many bad things about Plantar Fasciitis, and now it was my turn to experience the frustration of it. This was at the end of May, and I was scheduled to run two 10K races (and a half marathon) two weeks later as well as Grandma's Marathon at the end of June. Not ideal timing.....I took an entire week off from running and did a lot of stretching and massaging my foot. I was able to run the two 10K's, but elected to DNS the half marathon. I was able to run Grandma's, and finished just over five hours. It was slower than I'd prefer, but given my circumstances, I was satisfied. After all, it was 26.2 miles....the fact that I was able to finish on my feet (and not a stretcher) was nothing short of a victory.
This was a record number of races (23 actual events, one virtual event) for this gal.  My total miles came in at 771(+/-).  I realize that is small peanuts compared to most of my comrades, but I pride myself on my ability (and luck?) to be able to keep my miles at the minimum and still excel with my distance training. Not everyone can maintain their endurance with this kind of mileage, I appreciate the fact that this works for me. I was a little surprised the actual miles weren't a bit higher, but I did take a good week or so off in February (after a bad fall and had several bruised ribs, making breathing a little difficult). I also took a week off in early June (Plantar Fasciitis), and I scaled my mileage way back in August, in recovery from my Ultra in July.
That's right! I ran my first Ultra! The setting was in Lisle, IL (near Chicago) for the Christmas in July, on the hottest day on record (at the time). The humidity was unbearable. The race (we did the 6-hour race) began at midnight, under a sky brightly lit with Christmas lights and an occasional lightning bolt. There were two hours of rain to add to our enjoyment, as myself and six other gals (along with all the other race participants) made our way around the 1-mile looped course for six continuous hours. We talked, laughed, cried, ate, and drank as we ran through the night. And we all committed to returning in 2016 to do the 12-hour endurance race.

I also ventured (yet again) out of my comfort zone and conquered my first duathlon. This event, Flying Pig Duathlon , had us running a 5K, biking for 20 miles, then running a final 1.5 mile jaunt to the finish line. That final run seriously felt like a death march, and most of us looked (and probably felt) like zombies, but it was a great accomplishment for little 'ole me with limited experience in the saddle of a bike.

Always looking for a new challenge, I did several "short" monthly challenges to keep things interesting. I have learned that I do better with short-term challenges (that are over and done quickly) rather than long-term goals that take several months to see results. I also am more disciplined when these involve daily obligations, because I'm less likely to procrastinate the work. My favorites (that had the most impact and visible results) were those involving daily yoga poses, daily squats/lunges, daily planking, daily push-ups, and (short-term) streaking).

Most recently, I was able to surpass 200 planking minutes (blog recap HERE) in November (and my core is ever-so-thankful). I also did 100 daily push-ups in December (even while on vacation). I also completed my fifth running streak (also while on vacation).

But since a picture is worth a thousand words, I'll let the pictures tell most of my 2015 story....

So, that's a wrap. I typically don't make resolutions for the new year. Designating January 1 as the "start" date for goals is great, but each new month, week, day, and minute are opportunities for growth and renewal.

I'm linking up with Deb from Deb Runs  for the Wednesday Word link-up...today's word happens to be Renewal. Head over and check out what everyone has to say about Renewal. Let's make 2016 the best year ever!! 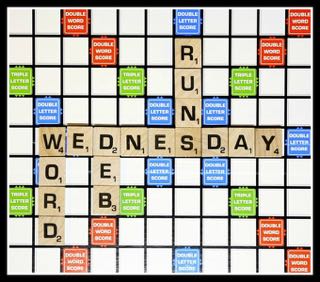