I can do hard things 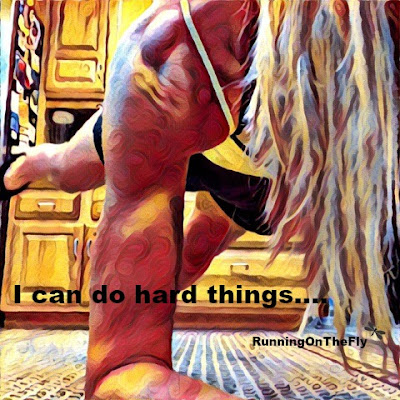 Another crazy week is in the books (with some Aha Moments ). Whew! Stick a fork in me, because my rest/recovery days were  greeted with open arms! This week's theme? I can do hard things.

My first outing in the running shoes, on Monday, was greeted with nice, crisp temps and and clear skies. I hammered out four easy miles and was back home before the sunrise. As I have said before, I welcome the cooler temps, but it's with a sad heart that I bid farewell to summer.

Tuesday, I woke up early,but just was not feeling the run. My body was feeling fatigued (too many late nights prior to my early mornings...#myverybad), and I rationalized I could just do my run after work. The temps were also pleasant, and there was ample cloud cover, so the heat would not be much of an issue.

All worked out well, and I was able to get my run done in the mid-afternoon hours. I was supposed to do a negative-split run...but my mojo kicked in, and the run turned into more of a progression run instead (which still netted me some awesome negative splits). My splits (after the 1-mile warm up) were 10:29, 10:11, 10:06, 9:48, and 9:33), and that's just what my shattered ego needed as a comeback performance following my frustrating half marathon (recap HERE ) three days prior.

Wednesday is typically an active recovery day. We also had an unplanned jaunt to Iowa City (an hour away) to tend to some landlord duties (dead oven in our rental). So, there were some (oven) dead lifts and squats added to my roster. When we returned back to town around 9:30 PM, I was exhausted, but had not had time to do any light cross-training....so I went with my fallback go-to: stair-climbing. I added in some planks and push-ups, and nearly collapsed in the stairway before falling into bed. It was hard, but I got it done (and slept pretty soundly).

For Thursday, I had  some hill repeats on the schedule, but wanted to test out the hills on the treadmill. I know, I know...the dreaded 'mill, that has been in a dormant state for the better part of 2016.  Our treadmill currently resides in our mudroom, which is directly below our daughter's bedroom...and I knew she would not welcome the sound of that at 5:15AM, so I elected to post-pone that experience until later in the day. I was anticipating a relatively slow day at the office, which usually guarantees an extended lunch hour...so I could do it then. But I did some planking to start my day...

Have you ever done hill repeats on a treadmill? Holy crap. There are no words to accurately describe the torture of that workout. After an easy warm-up mile (outside, in the beautiful mid-day sunshine), I headed back inside and fired up the 'mill. I set the incline on 4, and upped the speed to 7.0 (ha ha ha, a bit grandiose, don't you think?). After 600 meters, it was all I could do to not fall off as I hit STOP. I lowered the incline, and reset the speed for 4.5 for an "easy" recovery jog. I then, again, adjusted the incline to 4 and upped the speed to 6.8 (because 7 was just too crazy for me). After 600 meters, I (again) had to hit STOP for fear of face -planting as I lowered the incline back down and reduced the speed.

This pattern continued for four more sets. Although I was tempted to call it quits after four, I persisted and finished all six. My legs felt like over-cooked spaghetti, and there were drops of "water" everywhere on the control panel (remember, this had not been in use for several months, so it was pretty dusty when I started). My braids were dripping and my clothes were totally saturated...but I had (somewhat) conquered the beast. Even though I eventually lowered the incline to 3 and reduced the "fast" speed with each set, I felt like a war hero returning from combat when I climbed (carefully) off the 'mill and headed to the shower. Wow, that workout was hard.

With a busy morning on the agenda (volunteering for a local race), I headed out early to get my 10 miles done. I left the house around 5:20AM and got almost three miles done (under the beautiful full moon) before meeting up with my friend, Barb. The two of us ran almost six miles together. We parted ways (she also was helping with the race and needed to report for duty earlier than me), and I finished up the final miles on my own.

I really like these early morning miles. The tranquility and peacefulness is beautiful, and it feels great to get the miles done before all the other craziness of the day begins.

Sunday was another low-key, active rest/recovery day. There was some planking, biking, and LOTS of stretching and foam-rolling.

In other news, the planking challenge is going strong! It's hard to believe we're already past the halfway mark. I don't always post my planks daily, but I have been doing them. I'm currently around 80 total planking minutes for September. There may be a few more minutes that I have forgotten to write down...my goal is not a specific number, but to keep on with the daily planking and inspire others to do the same. Are you planking with us? Want to join us? Use the hashtags on Facebook and Instagram #GoAhead #MakeMyPlank!

How was your week? Great workouts? Plenty of action? Can you do hard things?

As usual, I'm linking up with the lovely Holly and Tricia  for the Weekly Wrap. Do headover and see what's been happening!