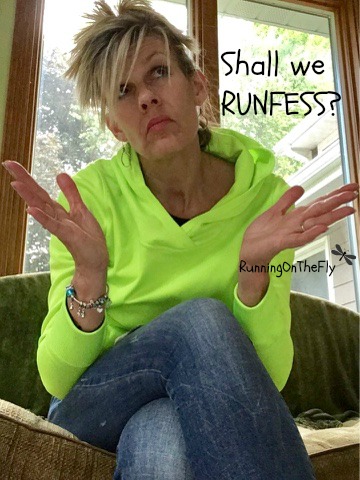 Anybody know what time it is?

As the month draws to a close, that can only mean one thing for a lot of us runners....time to runfess some stuff. After all, we're only human, right? Not every thing in running (or life) is all rainbows and lollipops.


Overall, my training has been going remarkably well. Although there have been a few achy muscles on occasion, I have pretty much avoided injury. I've been able to do almost all of my runs outside, so 'Milly hasn't been a thorn in my side. I also had some decent finish times at some recent races. Life has been good.
But, there are a few things that need to be brought forward and runfessed out loud:

**Shall we start with the Weather?
Seriously, what is going on? I runfess I'm SO done with it. Cold temps, damp air, and much (too much) wind. We've had some beautiful days with oodles of sunshine and fresh air, and they've all been followed by several more days of late-winter conditions (minus the snow). Enough with it already, it's time to move on to some seasonal weather, Momma N. End of story.
*****Did you hear about the impromptu 16-miler?
Last weekend, rain was in the forecast for all day Saturday. My friend, Barb, and I had stalked several weather apps, and pretty much (on Friday) decided to postpone our long run to Sunday. Knowing this, I wasn't very diligent about hydrating and fueling because I planned to spend Saturday prepping my body (and mind) for Sunday's run. Then Barb texted me mid-morning on Saturday, and told me her app showed a window of "dryness" starting around noon...should we attempt to head out then (instead of waiting until Sunday)?
I was hoping to do 16-17 miles...and I hadn't even had breakfast yet. Could we? Should we?  Well, we did. I ate some food, and got my hydration pack ready. We set out around 12:15. Although the rain had halted, the air was still damp and the wind was fierce. My energy actually did alright for such a grand undertaking with minimal preparation, but neither my body (nor mind) were strong players. Battling the wind didn't help either. The final two miles were tough, and we called it good at 16 miles. I runfess this run really had me doubting if I could squeeze out another 10 miles come race day. By the next morning, though, I felt like a new person. Apparently the endurance is there, working strong, even when we're not aware of it. Who'da thunk?

*****Let's not forget about Grandma's Marathon...
Grandma's Marathon is a mere three weeks out...happening on June 17th, in Duluth, MN. Wow, three weeks! The training has really gone fast, and it's really gone well (knock on wood). My longest run (so far) was the 16-miler last weekend. Technically, this week is a scale-back week because the previous three weeks have been intense. I have a half marathon next weekend, and I plan to do an additional 5 miles after the finish line (thus, finishing the morning with 18 total miles), then taper can commence.
Did you see that? I'm not doing a 20-mile training run, and I must runfess I'm NOT worried about it. I know, I know... a 20-mile run is pretty much the benchmark for marathon training. After all, I have done 20-milers in training for three of my four previous marathons.  I also know my endurance base is solid, and it got me through two (overnight) ultra's without reaching that 20-mile benchmark either. Besides, I am not going into this race with a BQ on my agenda. If I'm gifted a perfect day with perfect conditions, then all the better. I ran this very race in 2015 after a train wreck of a training cycle AND nonstop rain for the first two hours AND several porta-pot stops in the second two hours AND a recovering PF-laden foot. I also ran a hilly Route 66 Marathon with a wonky hip. If I can do two tough marathons with less-than-desirable race day conditions, I'm not worried about going into this one "slightly" under-trained.

*****I had a recent shoe revelation!
Don't we all just love and adore running shoes? Seriously, can we ever own too many of them? I had an ad pop up on my Facebook newsfeed from the Brooks website this week...the Adrenaline 16's were on clearance for $78! I clicked in, only to discover they were the men's shoes, not the women's. Then, I noticed they were narrow width! Having worked at a shoe store, I remembered that men's narrow width (B) shoes were the equivalent of a women's regular width (B), and a men's size 9 is (usually) the equivalent of a women's size 11! Bingo! They had my size (albeit, a men's shoe)! I have to come clean and runfess I let that golden opportunity pass. I just got a new pair of Mizuno Wave Inpires, and they have been fantastic. I also have two pairs of Brooks Adrenalines that I trained in for Route 66 (although they have some miles on them,  I can still use them for shorter runs), as well as a fairly new pair of Brooks Ravenna's. But, I will remember this little piece of shoe knowledge for future purchases.

*****How would YOU feel if it happened to you?
I think social media is a great thing. I have met so many wonderful people, and my running experience (and my friendship circle) have greatly been blessed by the power of social media. That said, I realize that a lot of people use it as a platform to market their businesses as well as network with others who share similar interests. That's all well and good, too. I'm a social gal...if a stranger initiates a conversation with me, I'll play along. I must runfess, though, I will question how genuine a stranger's interest in me is if they try to recruit me to join their "team" (and subsequently "unfollow" me when I decline). Trust me, I've see their products (in several of their pictures) and I've read their "pitch," if I want any (additional) information, I will ask.  Granted, I'm a tough sell (I used to work in sales, so I know a lot of their tactics LOL), but I don't like being schmoozed and then duped. And it's happened more than once. Rant over.
*****And, here's a BONUS Runfession (because, why not?):
After the marathon, I don't have anything (yet) on my racing calendar until November. Can I runfess I'm actually looking forward to a non-commital summer schedule? Of course, I say that now, but will most likely find some (or several) races to do, though I won't have any "big" events that require excessive training.

Ahhhhh, it feels good to get all of that out in the open!

How about you? What would you runfess? Weather? Training? Shoes? Ever been schmoozed & duped?

I'm also linking this with Meranda and Lacey and Rachel for the Friday Five 2.0. 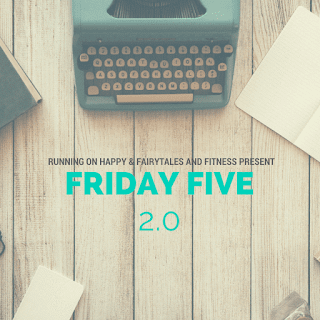