They say what happens in Vegas stays in Vegas...well, I'm gonna share my latest Vegas adventure.

I registered for the R'n'R LasVegas back in March, a few months before that plot twist of a summer smacked me in the face (and the knee).  Not only did I have to DNS the R'n'R Chicago, but I had paid big bucks for the Vegas experience. Also, there were several blogging gals (Tricia, Marcia, Mary Beth, and Darlene) headed there as well. I was granted clearance to resume running in mid-September, giving me less than two months until the Vegas start line. Although I knew my endurance was fine, that still presented me with a tight window to get my body in 13.1 condition. None the less, I was determined to make it happen...


The hubby and I arrived in Las Vegas late Friday evening. It's a 3+ hour flight from Iowa, and by the time we were situated in our room (at a bed and breakfast), it was almost midnight.

Packet pick-up was the next morning for me. Despite being such a huge expo, getting my bib and shirt went quickly...unlike the LONG line I waited in to purchase my #VegasStrong shirt (the #VegasStrong shirts were made available as a fundraiser, with all proceeds going to the survivors and families from the October 1st shooting). 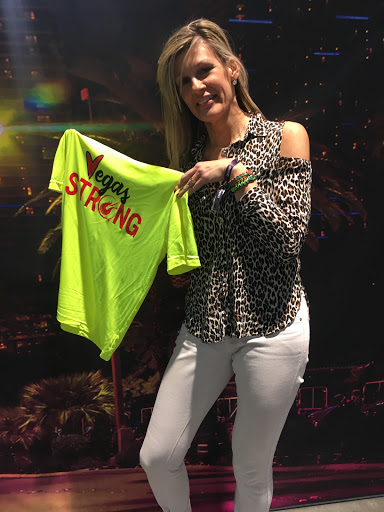 We spent the majority of the day hanging out with Tricia and her hubby, Greg. I have known Tricia for almost two years (via blogging and social media), but had never met her in person. You know what they say about running friends? That it's like you've known each other all your life? Well, it's the same with blogging friends. 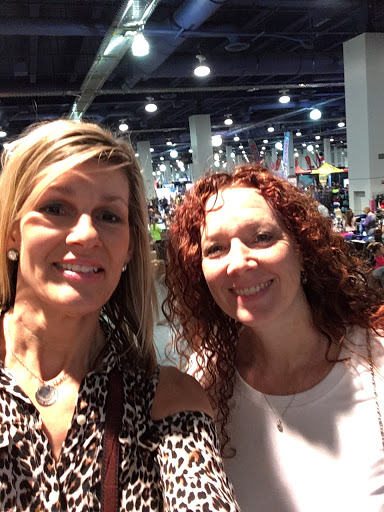 That evening we headed to the northern edge of the strip for the 5K. Although, I did not run the 5K, three gals in our group did.
Sunday was race day. Since we were staying at a B&B (and not on the Strip), I brought all of my running gear with me when we headed back to the Strip around lunchtime. I wound up changing into my race outfit in the Giordanos restroom (after a delicious late lunch of pan pizza) before we hopped on the monorail, en route to the start line (near New York, New York).

I found Mary Beth on the monorail, so her and I walked to the bag check together before meeting up with the rest of the crew. 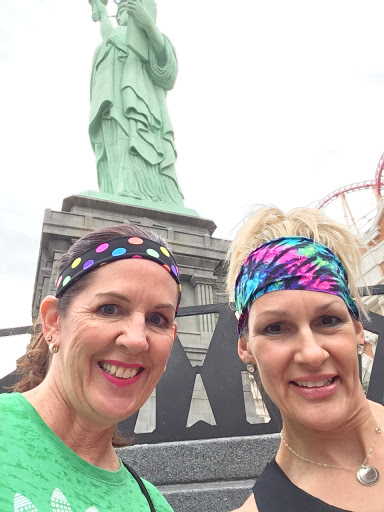 We arrived at the bag check around 3:30. The race start wasn't until 4:30, so we had a few minutes to chat before lining up (in our respective corrals). Oh my, the corrals were tight! Marcia, Darlene, and myself were in corral 12, and it was shoulder-to-shoulder crazy crowded. 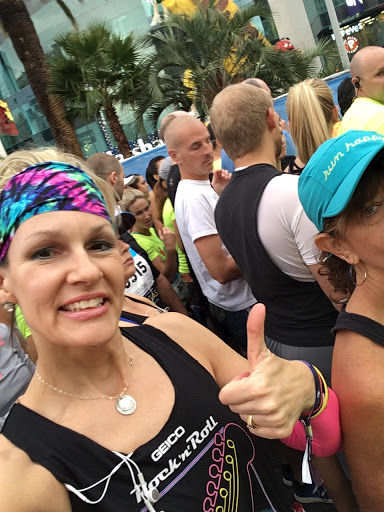 The temps were in the mid-60's (I think), but felt so much hotter due to the close confines of all the runners. The corrals were sent off in approximate 5-minute intervals, so it probably wasn't until 5:00 when we got our send off.
In contrast to most R'n'R races, the first part of the race was in silence, as a tribute to the victims of the recent massacre. We headed south, down the Strip, passing the Mandalay Bay hotel. It was very quiet and somber. Shortly after the 1-mile mark was the turn-around, taking us back north on the Strip.
It was around the 2-mile mark where Marcia and I decided to pull over for a quick potty break, and we said our "see ya at the finish line" good-byes to Darlene. I had brought a 20-oz. water bottle along with me, with the intention of tossing it before the start of the race. Since it was so crowded (and I didn't see a trash can anywhere), I hung on to it...and that proved to be a nice twist of fate. Due to the "dry heat" of the desert, I was in an almost constant state of thirst.

Marcia and I continued onward, chatting about all things running and blogging. Her and I actually had met back in January (though we'd already known each other for awhile via blogging and social media), so it was fun getting better acquainted under the neon lights of Las Vegas Boulevard (by the time we reached the third mile, almost all of the daylight had disappeared).

So far, I was feeling pretty good, but I was paranoid. I had run a 10-mile training run a couple weeks prior, but that was the farthest I'd run since Grandma's Marathon (mid-June). Don't forget, I had that unexpected 3-month sabbatical immediately following. I knew this race was not in contention for a PR, and I was quite alright with that. I just didn't want to risk anything by running too fast. Our pace felt comfortable, but slightly faster than what I'd been training. Also, after the turn-around, were rewarded with a slight breeze (that felt oh-so-good!) and a slight decline in terrain, so it was difficult to slow down.

Having had a rather late lunch (around 2:30), I waited until after the third mile to take my first gel. It wasn't too much farther (between the 4th and 5th mile?) when I knew I needed another potty stop. The tummy was feeling a bit off and #yuck.

Before long, we spotted the Stratosphere up ahead, and Marcia warned me that it looked a lot closer than it actually was. She was not kidding! It was a beautiful landmark,but we didn't pass it until just after the 6-mile mark.
A short ways later, we stopped again for a few minutes. This time it was Marcia's turn for a potty break, and I needed to refill my water bottle (seriously, I was sipping water every 1/4 mile or so and still felt so thirsty).

It was shortly after the 8-mile mark when I took my second gel, as we began a small loop through what is referred to as "Old Las Vegas." We even passed Elvis! I said, "Hey, way to go, Elvis!" And he replied, "Thank you, Little Darlin'!" I wish I would have gotten a picture with him (#mybad).
Before long, we were back on Las Vegas Boulevard, and headed south. Although I didn't really feel tired, I could tell my hips were not happy. Marcia was feeling a bit "off" as well, so we took a few intermittent walk breaks, and those short breaks served me well.

We passed the Stratosphere again, this time around the 11-mile mark. It was right near here when we spotted the lead marathoner coming through (#overachiever LOL). At his point on the marathon route, he still had about 5-miles left to go, but he was looking fast and strong. It's always a goal for me to finish my half marathon BEFORE the first marathoner crosses the finish line....but this dude was really clipping along. Ha!

I finally drank the last of my water and tossed the empty bottle just after the 12-mile mark. I don't think I've ever run a half marathon with a cumbersome bottle in my hand, but I'm glad I had it with me.
The finish line was tough to spot....not sure if it was because of all of the other bright lights everywhere else, but it seemed to take forever before we finally had it in sight. Suddenly, I had a surge of energy and a painful lump in my throat. As I made my way to the finish line, I could feel my eyes tearing up....I had done it! I had rallied back! Things had seemed pretty bleak just five months earlier on the hospital bed (post-surgery), but now I had just finished a half marathon. Wow.
I gave Marcia a hug, and thanked her for being by my side. This was not a race about speed, but of endurance. It was a scenic course (hello? Las Vegas!) and I had the privilege of  running it (with a friend, no less). Every run is a blessing. 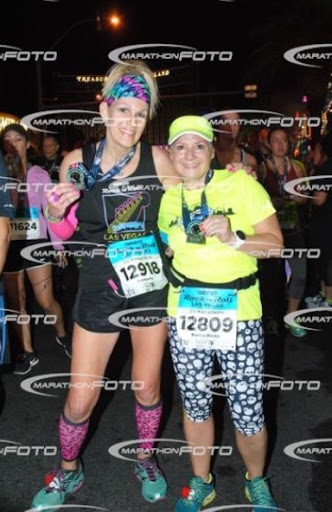 The hubby texted me almost immediately, and we found him soon after. Next, Darlene found us. And, it wasn't long before Tricia and Greg appeared. Mary Beth was right behind them. We all had done it!

Overall, this was a fantastic event. The corral line-up was a bit of a nightmare because it was so crowded (with very limited entry onto the course), but that would be my only complaint. Everything else was top-notch...bag drop-off/pick-up, music, crowd support (along most of the course), security, post-race food/drink.
And, check out the swag! The medal is SO cool...not only is it heavy, but the center part spins around! I took the liberty to cut my shirt into a tank top...I'm not much of a short-sleeve shirt gal and actually wanted to wear the event shirt for the race itself (karma be damned).
The R'n'R Las Vegas Half Marathon route is an overall flat course. There was a slight (though gradual) incline in the first mile, but then it was a straight stretch of 5-6 miles with a gradual decline after we turned around and headed back north on the Strip. Some runners prefer a flat course, but I prefer a few gradual hills to avoid over-use of the same muscles. Something else to consider is the late afternoon/early evening start time, which makes for a challenge in eating and fueling pre-race.

Although my finish time was a good 20-minutes slower than "usual," I honestly do not care. I didn't expect to run this race fast anyways....it's Vegas, after all! Why not enjoy the experience, right?

For the most part, I felt strong the entire race. No hitting the wall, no muscle cramps, no fatigue. That said, my hips did feel a little sore towards the end (and were REALLY angry when I finished). I think the intermittent walk breaks played a significant role in keeping me in the game. I couldn't quite satiate my constant thirst, though...not sure if that was due to the dry heat of Vegas, or if I was legitimately dehydrated (probably a combination of both).

About an hour after finishing, my tummy totally cramped up on me, to the point that I could not eat anything at all. Thankfully, I had drank two little bottles of chocolate milk right after finishing the race, and eaten some potato chips as well. Ugh. That was not a pleasant experience. Looking back, I'm sure it was a dehydration issue because I know I did not have enough water the day prior. Sport gels have a way of wreaking havoc on my tummy if I don't hydrate properly during a race....and since I felt constantly thirsty, I was probably starting the race already dehydrated.

Side note--they had shirts available at the expo with all the participants names on them, and also banners with the runners' names as well.
So, that's my experience rocking the Strip. Have you ever been to Las Vegas? Ever run an evening race?