With my rally-back-to-running going so well, I felt the need to add another race to my calendar. Enter the Hillbilly Hike.

Now in its fourth year, the Hillbilly Hike is a fairly small "local" event, that has grown every year. The main beneficiary is the Indianola Christian Union Church Mission Team (more info HERE). The course involves a point-to-point route along the Summerset Trail (a former rail trail). Participants have the option of running the half marathon, 10K, or (new this year) the Greubel 5K.

This event has been on my radar for awhile. I actually ran the half marathon, both in 2014 and 2015, but elected to do the 10K this year (since I didn't think it wise to try to run half marathons on back to back weekends this soon with my surgery recovery).

Like with most of racing endeavors, my friend, Barb, was running the race as well. We had a 5:45 departure time to get to Carlisle (IA) for the race check-in.
All races began at 8:00, but the half marathoners were shuttled to Indianola (IA) for their start line, and the 10K racers were dropped off at Summerset State Park (which was the halfway point for the half marathoners). The 5K was a simple out-and-back course. Everyone crossed the same finish line in Carlisle, right near where we all had checked-in.

The temps were chilly (low-40's), but comfortable. There was a constant mist in the air, but (thankfully) very minimal (if any) wind. I suited up in a base layer of a fleece-lined tech top and added a flannel shirt (this was a hillbilly-themed event, after all) and opted for full (unlined) running tights. I brought along a thin puffer vest, but decided  to leave it at the bag check at the last minute...and was very glad I did so.

Even though I have been running (and racing) for the past 12+ years, more often than not, I run the first mile faster than necessary...and this race was no exception. There was the usual weaving around fellow runners, but I didn't think I was going that fast. My first mile showed an 8:48 pace...not overly fast, but definitely faster than I have been running the past seven weeks (since resuming running following my recovery from surgery).

The first mile had us running a big loop through Summerset State Park before merging onto the Summerset Trail itself. Barb and I ran the first mile or so together. I pulled over for a quick drink of water shortly after that first mile and kept my eyes on her for awhile, but eventually lost her.
Having never run in a flannel shirt, I didn't know what to expect. On a whim, I tied the bottom into a knot (which kept it from blowing), but the loose fabric was annoying. The sleeves kept sliding down (even though I had rolled them up several times), and I could feel the unbuttoned neck flapping and bouncing. I really was surprised, though, at how warm that shirt felt, considering how thin the fabric actually was.

The second and third miles felt much like the first mile, albeit a bit slower. Even though I drank some water on our drive to the race, I regret not bringing water with me on the bus. I spent the greater part of the race feeling thirsty, which is not ideal. As we all know, if you feel thirsty, it's usually too late. Since it was only a 10K (and the temps were not hot), the thirst was not a huge deal. If this would have been a longer race on a warmer day, I could have been in trouble.

When I reached the next water station (I think around the 3-mile mark), I pulled over and grabbed another water. I didn't walk for very long, but the short walk (20-seconds?) was just enough to rejuvenate me.

It was around the 4-mile mark where the trail has a long, gentle curve...and it seemed to take forever. Physically, I didn't really feel tired, but I was still feeling whatever that little twinge was in my right hip. I kept my focus on the curve, and once the trail straightened back out, I decided to walk again for a few seconds.

The final 1.5 miles went well. I could tell I was starting to feel a bit fatigued, but my pace still seemed to be strong. I remember glancing at my watch, and was momentarily elated to see my mileage was at 5.75 and my time was well under 52 minutes! Really? For a brief minute, I thought a PR might be in the bag...only I still could not see the finish line. Then, a short while later, I realized my watch must have said 5.25 miles....and I still had a ways to go. Talk about a buzz kill!

A unique aspect of this event is the post race food. Can you say, "Biscuits and gravy?" How about, "Pie?" Of course, there also was the water, chocolate milk, and bananas.
They even had a hillybilly photo booth! 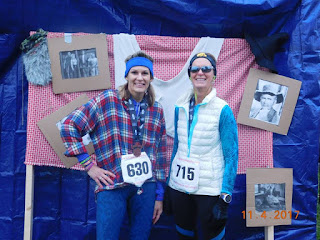 Over all, I am really happy with my efforts. Seeing how consistent my splits were shows my pace is rallying back. I later learned I finished with 3rd place age group honors (out of 11). I say "honors" because only the 1st and 2nd place finishers received awards (discounts on next year's event). There were 175 10K finishers (I was 52nd overall), and 108 women (I was 28th). Congrats to Barb...she placed 1st in her age group!

I must admit, I had thought of trying for a PR. It's been awhile, but I think my 10K PR is just under 54 minutes. The temps certainly were in my favor, as was the relative flatness of the trail. But, my body still is not quite 100% recovered from the 3-month sabbatical it endured over the summer. And, there was a weird little "strain-like" thing happening with my right hip (isn't it always something?).  Although I felt strong for most of the race, I didn't have that deep-down urge to go all out on this 10K. With the Rock'n'Roll Las Vegas 13.1 happening a week later, I just didn't see any benefit in tempting fate and further messing with the hip.

In conclusion, I have to give this event two big thumbs up. The Hillbilly Hike is not only well organized, but they had numerous volunteers manning the water stations (and many of them were all decked out in hillbilly attire). The race pics were even free! And the route along the Summerset Trail is quite scenic (even on a dreary morning).
Care to join me next year? Have you ever done a race on a rail trail? Ever dressed in hillbilly attire for a run?