Not only was I chased by a herd of lads, but I was also passed by an entire lot.

Did you get all of that? It happened on Saturday, March 10th, at the sixth annual Leprechaun Chase 10K (Des Moines, IA).

This is such a fun event, with a most unique format. The lasses (all the girls) get a 5:30 head start, and the lads (all the guys) then follow suit. Almost everyone is dressed in green and most are on a quest for their fastest 10K finish possible. Whoever crosses the finish line first secures not only bragging rights for winning, but they also secure a free green beer for their entire entourage (fellow lads or lasses). The lads were leading, 3-2 (from the previous five years), prior to the start of the 2018 Chase.

Here's the low down on what happened this year:
The temps were mild (high 30's) and we had clear skies when we left town for the hour-long drive to Des Moines. The hubby and I rode with Barb (my famous running gal pal). Another friend, Amy, caravanned with us. The race didn't start until 10:00, and we arrived with plenty of time to meet up with another friend, Chuck (who had gotten all of our race packets for us).
Barb, Amy, and myself did a very short warm-up run prior to getting in line with the other gals. 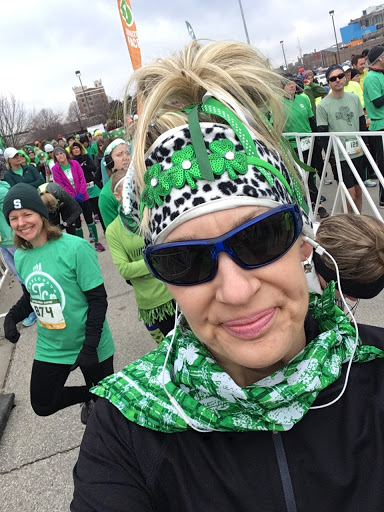 They played the National Anthem, and we were off. Having run this race the four previous years, I knew I had to be careful with the first mile. The course is pretty flat and very fast, and everyone sprints right outta the gate (myself included). I did my best to hold back and several gals even passed me...but when I glanced at my watch at the 1-mile mark, my pace showed 8:25. OOPS. It really didn't seem like I was going that fast!

Knowing I would not be able to maintain that pace for 5.2 additional miles, I really had to reign it back. There's about a 1/4-mile out and back segment right after the 1-mile mark, and that's where I saw the first of the lads working their way through the crowd of lasses. The lead lad passed me just before I made it back on the main road....and several more passed me a short while later.

Even though the sun had retreated behind the cloud cover, I didn't feel cold. I had a fleece-lined base layer under my black 1/4 zip jacket (and arm warmers between those two layers). I have to confess...my green leggings weren't "real" running tights (nor were they lined), but they were bright green, so I didn't care. The thigh high striped socks were a fun addition (and actually stayed in place!). At the last minute, I opted to add a running skirt, though, because the green leggings and the thigh highs just looked weird all on their own...almost like I had gotten dressed and forgotten something.

It wasn't until we'd turned onto MLK, Jr. Parkway (heading south) that I could really feel the wind, just after the 2-mile mark. Thankfully, I was able to slow my speed down considerably in that second mile...my watch showed 8:59. Whew! Although I'd prefer to be near the 8:45 range, I knew I needed to slow down (and hopefully not crash and burn from going out too fast at the start).

The third and fourth miles were pretty uneventful, but I could tell the wind was taking a toll on me. Both of these miles had us circling Gray's Lake, on our way to the east-bound trail south of the lake.

I could tell my body was ready for a short break. I glanced at my watch and saw my pace was staying pretty steady, but most of the final stretch of the race would have the SE wind in my face. I pulled over for a 50-second walk break, and that seemed to do the trick. Feeling recharged, I continued onward.

From (approximately) the 4.25 mile mark to the (approximate) 5.9 mile mark, the route was headed due east, on a paved trail that ran parallel to the Racoon River. At long last, I spotted the bridge up ahead...the bridge that would take us (north) across the river and back to the finish line.

I made it across the finish line with a 56:23 chip time. It was a couple minutes out from a PR, but definitely a finish time I was pleased with, considering I had started much faster than I should have.

I found Chuck shortly after finishing, and we were reunited with Barb. Amy had to clear out and head back to town (we later learned she got 3rd in her age group!). A few minutes later, we found Dave, another local runner from our hometown.
The hubby had been having knee issues, and decided to walk the entire route. He met up with us a bit later at the post-race party. 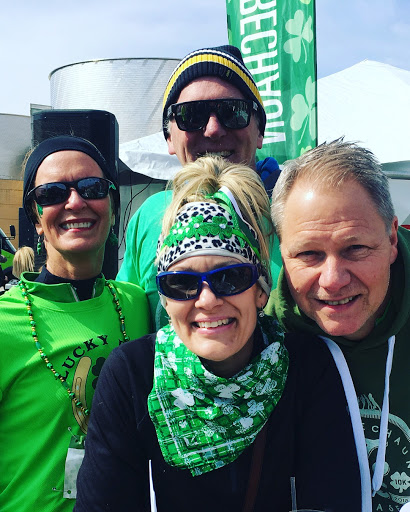 Overall, I'm happy with how the day played out. I never like resorting to walking, but that darn too-fast-start kind of came back and briefly bit my buttocks. My stats showed I was 4th (out of 29) in my age group, 130th (out of 528) within the females, and finished 343rd overall among the entire field of 875 racers. Yes, ANOTHER 4th place AG finish (I wish I was making that up), but a huge congrats to Barb...she was the 1st place gal in her age group! The lads took the victory crown (again). The winning lad set a new course record (30:43), and the winning lass had a decent 38:44 finish time.

As I have said before, this is a great event! I ran it in 2014, 2015, 2016, 2017 and have every intention to return next year as well. It's reasonably priced...I paid $35 for early bird registration (back in December). In recent years, they have offered a free "upgrade" from the usual t-shirt for the early bird registrants...this year it was a pullover hoodie. Nice, huh!
The Leprechaun Chase partners with the Des Moines Animal Rescue League. I have not heard the final numbers for this year, but they did say that in the past six years, they have been able to donate over $20,000 to their cause.
So, that's the 2018 Leprechaun Chase. Have you ever run a similar race, where the gals get a head start and the guys have to try to catch up to them? Ever run a St. Patrick's-themed race?

**I'm  linking up with Marcia and Patty and Erika for Tuesdays on the Run.  We're chatting about lucky endeavors....can you get any more lucky than running a fun leprechaun-themed race?
**I'm also linking this with Debbie and Rachel and Lora for the Running Coaches' Corner.