Still Running Against the Wind

The wind is a ferocious beast, and one that refuses to play nicely.

Granted, the calendar is still showing winter (for a few more days), but we have had a sprinkling of spring-like weather. This is Iowa, and it is March, though. The weather is usually a crap shoot and whatever shows on the calendar is no guarantee of what Momma N will hand you on any given day.

None the less, she persisted (myself, not necessarily Momma N). Here's what went down this past week...


Monday
With a double workout on the schedule, and questionable weather possibility happening later, I laced up and headed out before the sunrise for a short #nevermissaMonday adventure. As I have done many times in the past, I ran several laps around the hilly blocks  in my neighborhood, netting me two total miles. I also did some shoulder/arm strength work in the evening.
Tuesday
A rest day, so there was nothing too grandiose on the roster other than a short early-morning walk in the morning and a 2-mile walk in the afternoon. There also may have been a few burpees happening in the early evening wind.
Wednesday
Not only was Wednesday Pi Day, it also was the day I celebrated another successful voyage around the sun. Yes, it was my birthday. For the past several years, I have been doing a 3.14-mile run every year on my birthday. This year, those 3.14 miles felt especially tough and trying...not sure if it was due to general fatigue or the 100 mph winds I had to battle. I was very surprised to see I had a sub-10 pace, because it felt like I was barely moving faster than a snail.
Thursday
I awoke on Thursday morning feeling like I'd been hit by a truck. No aches or pains, but definitely all-over exhaustion (and I had not been up late celebrating my birthday either). With my half marathon happening in a few days, I had already planned on skipping my usual stair-training workout, but I (briefly) considered doing a short run. It was maybe 30 seconds later when I decided the running didn't need to happen either. I took a short early morning walk, did a few burpees (20), some daily planking (ninja-style with my glorious bedhead), and called it good. Onward!
Friday
Another day with icky weather in the forecast, I did a short walk in the morning and that was it. Well, I also did some supermans, planks, and push-ups...then spent the evening watching NCAA basketball.
Saturday
Having stalked the weather all day (and evening) on Friday, I was most unhappy with what Momma N had waiting for me on Saturday morning. We'd had rain most of Friday, which had continued through the night, and it was still raining. My weather app showed the morning temps teetering between 32F-33F (a few degrees colder than previously forecasted), with intermittent rain/snow. Seriously??? I picked up Barb, and we drove through constant rain/sleet/snow all the way to Des Moines. Somehow, though, Momma N relented...we had a bit of a fine mist when the St. Paddy's Half Marathon began, but shortly thereafter, all precipitation ceased! The temps were still chilly and the air was super damp,  but we didn't have to deal with rain or snow or ice. I made it through most of the race feeling good, but did have a bit of crash in the final miles. I'm not sure if that was (1) more of the fatigue I'd been feeling all week, (2) being slightly under-trained, or (3) simply extremely bored with the race course. None the less, I crossed another half marathon finish line (I think this was #39?). Stay tuned, there will be a brief recap in a few days.
Sunday
Having felt tired and a bit sore following the race, I was surprised to wake up on Sunday feeling (almost) good as new.  I doubt my body is as recovered as it appeared, though, and it still needs more than 24 hours to completely bounce back. I got out for a short recovery run, amid the remaining snow (from Saturday's crazy weather), and all things (calves, hamstrings, hips) felt fine. The compression socks seemed to have worked their magic, and I also did more stretching and foam rolling throughout the day (as I watched more NCAA basketball). Priorities, right?
As I said, the wind was especially crazy this week. Even being outside, attempting to simply walk in it, was a challenge. I kept my running mileage low, but did get out everyday for some walking. Total mileage for the week was just over 19 miles (the bulk of that happening on the race course).

In case you missed out, here's the posts from last week:
Almost Blown Away
Leprechaun Chase 10K - 2018 Recap
Walking in the Wee Hours

In other news:
**Did you catch my #FridayFashionFlair post (on my Instagram page)? I only have a tiny bit of Irish ancestry in my blood, but I certainly celebrate it on St. Patrick's Day. How about you? Even if you aren't Irish, do you dress in green? As always, please join me on Fridays...post a pic of a featured outfit, use the hashtag (#FridayFashionFlair) and drop me a tag (@runningonthefly).
**Anyone who has followed me for awhile has heard me mention Dam to Dam, it's my favorite race every year. Well, it's pretty obvious it's the favorite race for a lot of other runners as well. Registration for the final Dam to Dam (June 2nd) opened up at 6:00 a.m. on Wednesday morning, and all 8,000 spots were sold out within three hours. What's more, they decided to add an additional 1,000 spots...and those sold out a few hours later!  And  (this gets better)...our youngest asked me if I'd register her for the race, too! Did I mention this all happened on my birthday? She even gave me a shout on Instagram, and officially started training this weekend. 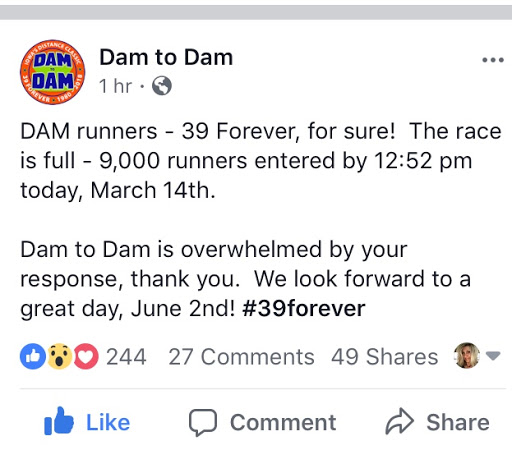 **Nothing makes for a great day of celebration like coming in to work and finding your desk all decorated...and a birthday sash and button pin waiting for you. Am I right?
**The pics were posted from last weekend's Leprechaun Chase...and the pics are free!
**And, lastly, did YOU celebrate St. Patrick's Day? I hope you didn't get pinched.
That's the latest and (somewhat) greatest in my little corner of the universe. How was your week? Crazy weather? Any races over the weekend? Training for a big race coming up?

I'm linking up with Holly and Wendy for the Weekly Wrap. This weekly check-in is such a great place to connect with fellow fitness-minded peeps. Please join us!
By the way...are you following me on social media? You can find me at these various platforms:
Let's connect : Facebook Instagram  Pinterest Twitter