When is the last time you had a reality check?

For myself, there have been ample opportunities as of late. Reality checks are actually good for us...they keep us humble and, often times remind us that we are human and not without fault.

For example, here's five recent ones:

Have you gotten your runner's glow on lately?
It has been a very hot and humid summer in Iowa (and elsewhere as well). Now, I love the heat more than most runners, but I shall runfess that even I have been "glistening and glowing" more than usual. It's been happening before, during and after most of my runs and races.

Recently, when I finished the Midnight Madness 15K (recap HERE), I felt (and looked) like I had been sitting in a deep vat of water. We finished the race around 9:30 p.m., and my clothes were dripping (quite literally). We hung out at the post-race party for a while, and arrived back home just after midnight. Even after an hour-long car ride (sitting on a thick towel, none the less), I was still a drenched mess. On a whim, I weighed myself with (and without) my wet race outfit before my shower...let's just say two pounds of perspiration had taken up residence in my race gear. I know, EWWWW!
Running (partially) naked for the win!

I was in Chicago last weekend for the Rock'n'Roll ReMix (recap HERE). I knew the GPS would be less than accurate with the plethora of tall buildings (and occasional tunnels), so I left the Garmin back in Iowa (I did have a simple stop watch, but no GPS). Also, since there was a big blogger meet-up happening, I anticipated I'd be running (and chatting) with some fellow blogging friends, so I left the Ipod back home as well.

I wound up running both the 5K and the half marathon races solo. The 5K route was pretty narrow, so it was just easier to do my own thing than to try and squeeze in between all the other runners along the lake front path. Then, on Sunday, I wasn't able to find (or reach via phone) any of the other half marathon racers from our blogging group at the very crowded start line. Did I mention there was almost non-stop rain during the half marathon as well?

Amazingly, I have to runfess both races went well for me despite the less-than-desirable race day conditions. I didn't know I had it in me to run that kind of a distance without my own music, but it really was no big deal. Granted, there was lots of beautiful Chicago architecture to keep me distracted from the rain, and there was plenty of music along the route. There was constant crowd support and a pretty amazing Blue Mile on Monroe Street. No complaints. No regrets. I even managed a 7th place AG finish (out of 120) in the 5K. Maybe I should run naked more often, huh! 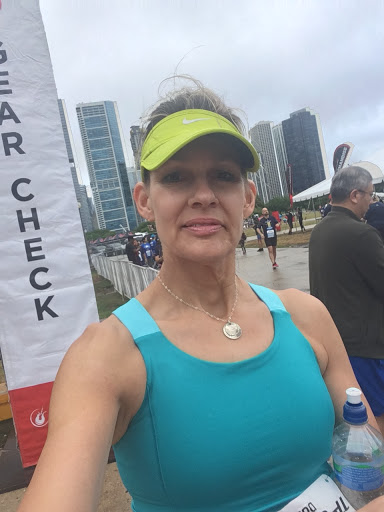 Keeping that glass half full
I took my first solo AmTrak train to Chicago, and it was an interesting endeavor. Not only was the train 2-hours late getting me to Union Station, it was not equipped with Wifi (as had been promised). Fortunately, I had forgone doing a Friday post, so I didn't have to burn through much of my data by reading/commenting/replying to others' posts (which would have been my plan had I actually published a Friday post). I also had brought along a spiral-bound notebook, so I was able to get several future posts drafted by pen and paper. A bonus? The notebook had a lot of hand-written drafts of old posts...let me runfess, it was fun rereading some of my older material from a few years prior.
Keeping things in perspective
At the recent Midnight Madness Road Races, I placed 5th (AG) in the 5K and got a bronze (AG) in the 10K. Both of those races were challenging because they happened back-to-back on an especially hot summer evening. Also, it was a 5K looped route, so those of us running the 10K had to run it two more times after the 5K finished. Imagine my surprise and elation to later learn I had also placed 2nd for the 15K (combined distance)! Then, upon further investigation, I saw that there were only two gals in my age group that did the entire 15K. How's that for a buzzkill! I did finish ahead of several younger gals, so there's that. I runfess, though, that I'm still happy with how the evening played out. My finish times were quite decent considering the circumstances, and I cannot control that there weren't more "old gals" in my particular age group. Onward!
Finally, as many have seen, there was a pretty epic blogger meet-up over the weekend at the R'n'R. As much fun as it was, though I gotta runfess...it just left me wanting more ;-) We had a lot of rain to deal with, but we had a lot of laughs, numerous hugs and fabulous conversation. Oh, and we also got to run on the streets of Chicago!
Anyways, enough about me!
How about YOU? have you had any reality checks lately? Profuse perspiration? Running naked? AmTrak adventures?

I'm linking up with Marcia for the ever awesome monthly Runfessions. Please join us!
I'm also linking this with Meranda and Lacey and Rachel for the Friday Five 2.0.
Posted by Kim at Running on the Fly at 10:14 PM