This week was all about the Rally.

Have you ever had to rally before? I have spent the past 12 months in a rally of sorts, assuming the title role in the Runner Who Rallied Back saga. A few days ago, June 29th, marked the 1-year anniversary of my emergency surgery (full details of  that adventure are HERE), so this past week has been sort of a lengthy and introspective walk-down-memory-lane.


There was plenty of rallying happening, as the week unfolded, in keeping my fitness in check. Here's what took place:

Monday morning took me a bit by surprise with its mid-60's temps. It has been so hot, that when the temps have a brief plummet, I'm a bit confused how to dress (especially when the air is so humid). Since I wasn't planning on running far, I slid on some arm sleeves, and all felt fine. I got a solid 5K knocked out in the early morning hours. Another #nevermissaMonday run done.
Tuesdays are rest days for me, but I seldom ever sit completely idle. The early morning temps were still feeling a bit chilly for my morning walk, but by lunch time, the "seasonal" temps were back. No running, but I did manage five total walking miles for the day as well as some upper body strength work in the evening.
Wednesday had me up early and out the door at 5:00 to meet Barb for our weekly #5at5 (five miles at 5:00 a.m.).Similar morning temps (again), but when you're running a longer distance (with even more humidity), no arm sleeves were even considered. There also was some extra walking later (three bonus miles) and some strength work in the evening as well.
Thursday. My legs were feeling a bit tired from the prior evening's workout, so I took Max for his morning walk (1.5 miles) and called it good.  I had speed training on my agenda, so I opted to push that to later, after work. Ironically, that Thursday afternoon time slot has been a perfect alternative for doing my speed training. My legs get a little extra rest/recovery before the late afternoon workout, and I can "haul buttocks" knowing I won't have to do anything major until my long run on Saturday.

I had planned on doing hill repeats on a steep, grassy hill near my house, but we had some early afternoon rain. Knowing my abilities (and ever-present klutz-like coordination), I elected to stay away from the wet grass and headed over to the outdoor stairway on the golf course instead. I ran an easy-paced mile for my warm-up, then got busy on the stairs. I brought my Garmin along so I could track how long it would take me to get one mile in distance...how does 70 flights sound? Yes, up and down 70 times! The air was warm (88F with a 98F feels like), but my energy was totally on-point. I was able to run all the steps with only two brief water breaks. My Garmin apparently thought I was running a very slow mile, because it only gave me credit for burning 83 calories for all that work! But I had a major endorphin buzz when I finished.
Friday was a major rest/recovery day. The temps were in the 90's, and flirting with a 100F+ feels-like heat index. Surprisingly, there weren't any post-stair-workout DOMS to entertain, but I kept things very easy. A brief early morning walk before work, and some planks, leg lifts, and push-ups in the evening. Zero guilt and a good night's sleep as well. Onward!
Saturday also brought us warm temps, as well as that ever-present humidity. Barb suggested we do a #6at6 (six miles at 6:00), so I was out the door at 6:00 a.m. to meet her at our usual rally spot (halfway between our houses). My weather app didn't show a higher feels-like temp, but it did indicate we had 66% humidity when we finished (I ran an extra two miles after we had finished our six miles, giving me 8 total miles). I have never been so sweaty (other than after Thursday's stair workout), I even joked that it was a new PB (#PerspirationBath). My clothing pieces made a very loud "splashing" sound when I discarded them on the floor. We also headed to our town's outdoor water complex and did an hour of pool walking to "cool down" and give our muscles some water therapy.

Sunday morning had pleasant temps in the high-60's (following some overnight rain), but the air still was pretty heavy with humidity. I have not been doing recovery runs (the day after my long runs) in recent weeks, but I wanted to get outside and take advantage of the morning. Within the first few steps, I knew it was going to be a great run! Even my right hamstring felt pretty good. I love those recovery runs that feel effortless, but I have learned to respect them as such and let them serve their purpose as recovery runs. Although the temptation is there to run faster and/or farther, I keep them short (usually 1-3 miles at an easy pace).
Overall, it was a pretty busy week. My running mileage came in at 20 and my walking miles were 15 (but there will probably be another 3-4 miles tacked on to that by the end of Sunday). As mentioned last week, we have a summer challenge going on at my place of work...we're on teams of three, and we're tracking our total miles (running/walking/biking) as well as activity minutes (for other "non-mileage" exercises/activities). Since I have an incentive to up my mileage for my team, I'm tracking my walking miles as well. Last summer was my first summer ever tracking "walking" miles (since I was not able to run), so it will be interesting to see how many miles I cover this summer doing both.

My right hamstring has been a bit wonky for the past couple months. It doesn't hurt, but it has felt especially tight at times. Amazingly, it has felt pretty good and almost back to normal since Thursday's hot & humid stair workout. I have been stretching and foam rolling as well, so (fingers crossed) hopefully this mini saga is approaching the finish line.

In case you missed them, here's my posts from last week:
Outrunning the rain
My 2018 Assessment (thus far)
Runfessions - Stronger Tougher Fierce Grateful

In other news:
Did you see my #FridayFashionFlair post on Instagram? With the hotter than hot outside temps, it's been colder than cold inside the building where I work. Admittedly, I'm a wimp in any setting where there's a chill in the air (which is why I love summer so much).  Anyways, it was over 100F with the heat index on Friday, so I wore a "cool" cami but added a cardi to keep my arms and shoulders warm. Turquoise has been a favorite color of mine forever, and pairing it with chocolate brown makes it really stand out. Oh, and that funky and chunky necklace is actually a belt (that has never been worn as a belt LOL). As always, you're welcome to join me on Fridays...post a pic of a featured outfit, grab the hashtag, and drop me a tag (@runningonthefly).

There's a first time for everything. I have had this fuchsia headband for several years (featured in my Saturday picture, above), and it's been worn and washed numerous times. After Saturday's hot and humid run, I noticed the ends of  my hair looked pink, apparently from rubbing against the headband during my run. I also noticed pink smudges all along my hairline as well, not only on my forehead, but also in my hair! Fortunately most of the pink washed out, but a subtle pink "glow" still remains. I suspect it will all be but a memory in a couple days...but what is up with that?
The runner who rallied back. Finally, I spent the greater part of the week and weekend experiencing numerous flashbacks to what was happening a year ago. Remember my reality a year ago? I was camping in a hospital room, hooked up to a wound vac (for my new 6-inch suture seam). I had an IV dispensing meds (to fight a rampant staph infection that I didn't even know had invaded my body). And I had an unpredictable journey ahead of me. 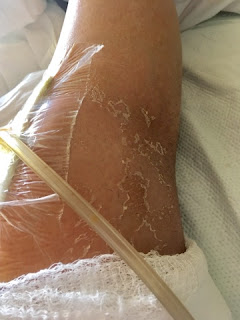 It's had to believe it's been an entire year since that drama unfolded! Sitting in church this morning, I was overcome with all kinds of emotions. Knowing that I had been in the hospital on this very day a year ago was surreal. Feeling so humble and grateful for all that has happened since then was pretty powerful. I've said it before, but it bears repeating....I could not have rallied back from this experience on my own. I think I had a pretty solid & optimistic attitude through it all, but I also had a huge network of support from family and friends (many of whom I have not even met in person). To all of you who were a part of my rally back, a huge THANK YOU! 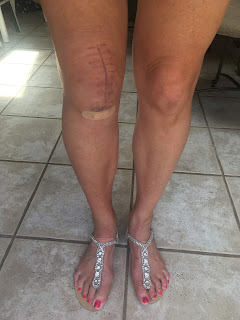 As you can see, the scar (named Voldy, short for Voldemort) has gotten smaller and has faded, but is still a pretty prominent "feature" on my knee. I pretty much have full range of motion, but a patch of skin, towards the outside of my knee, has no feeling. Some of the skin along the scar is "tingly" and hurts if I try to kneel on it...so I don't. Other than that, things are good! It's been an interesting journey, but I'm more grateful than bitter for the experience. Onward!

Anyways, that's a wrap on the past week. How was your week...any training runs? Any races? Hot weather? Have you ever had a "rally-back" experience?