The 5th annual  Kickoff to Kinnick 5K took place on Saturday, September 29th, and I was happy and eager to participate.

It was exactly one year ago that I pinned on a race bib and ran this very race...welcoming me back to the world of racing. After being sidelined for three months, there was a lot to love about being back in my running shoes on that special day, and the Kickoff to Kinnick 5K did not disappoint.

Seriously, what's not to love?
This event is 3.1 miles of excitement, there's plenty of runners dressed in Iowa Hawkeye attire, and the race ends on the famous Kinnick Stadium field?  If that's not enough, the main benefactor is the University of Iowa Dance Marathon, who do phenomenal work with childhood cancer patients and their families.


With a 9:00 race start, and an hour-long drive to get there, we rolled out of town around 7:15 a.m. The hubby and I, along with Barb (my long-time running/racing partner in crime) and Ramona (a fairly new runner), were dressed in warm (but not too warm) gear. The temps were in the upper 40F range and the air was damp, but the forecasted rain was a no-show.

Being a proud Iowa Hawkeye, I wanted to sport the black and gold colors. Fortunately, the event shirt was a perfect option, and I layered a fleece-lined tech shirt underneath. A bit too cold for shorts, I opted for lined leggings (complete with a Hawkeye logo on the ankle, by the way).
We had plenty of time to find parking, use the porta-pots and warm up before making our way to the start line. This was a very crowded venue....there were lots of people crowding onto Hawkins Drive for the race start, which was right outside of the Carver Hawkeye Arena.

I didn't really have any specific goals for this race, but I did hope to treat it as a final "speedwork session" as I wade through the taper of my marathon training. That said, I didn't have any grandiose plans of an all-out run-it-to win endeavor, but perhaps a tempo-paced run at best. Yeah, maybe.

Anyways, groups of runners/racers were released in waves. Our group finally crossed the start line maybe 15 minutes after the official start. Immediately, there were numerous walkers to weave around.

Granted, we were talking with some others and had not lined up according to our "true" pace, but we weren't lined up all the way back where the walkers usually were instructed to be.  I remember this being an issue at last year's race as well.

There is a short downhill segment, right past the start line, making it a challenge from the get-go. Not only was I fighting gravity (and trying to not go too fast), but the constant dodging of groups of walkers was tough. Also, remember those fleece-lined leggings (with the cute Hawkeye logo)? Well, they actually aren't true running tights, so their compression isn't too strong...and I could already feel them inching their way downward. Nice. Only 2,9 miles to go, and I didn't know if my leggings would hold up (literally) or not.

I made it down the hill, and the route turned left, going west, onto the Coralville Strip. There was a sidewalk, as well as the grassy area between that and the street. For me, it was just easier to stay on the grass instead of weaving around so many others on the street itself or the crowded sidewalk. Of course, that meant my shoes got wet (and stayed wet).

Eventually, the route turned left again, this time heading south along MormanTrek...a long and gently inclined stretch, with a slight curve. It was about halfway up the Morman Trek hill that there was a water station (which was just past the first mile mark).

Overall, I was feeling good and could tell my pacing was steady. My hamstrings (on both legs) felt pretty tight for the first mile or so, but had gradually loosened up. I was still passing numerous walkers at the water station, which goes to show how close to the front of the pack they had started.

The course turned left, at the top of the Morman Trek hill, and leveled off for a short ways on Melrose. This is where the journey back to the finish line, at Kinnick Stadium, began. There was another water stand, near the 2-mile mark. Melrose has a slight incline, then the remaining course is pretty level.

It wasn't until the final mile that the crowd of runners had thinned out and the walkers were no longer an issue. Although I didn't have the energy to run a true sprint, I could feel my body running with ease.
The last stretch of the course has us running under the stadium, and then coming out onto the field with the finish line near the 30-yard line. It is a pretty cool finish chute, lined with numerous onlookers and seeing yourself on the jumbo-tron.

I finished feeling satisfied with my effort. I guess all the long training runs have skewed my speed perception, though, because I felt like I ran a lot faster than what my splits indicate. Also, there's a discrepancy with my Garmin's pace and what the official stats show...I think it's due to all the weaving I had to do, which added some extra distance to my "actual" running distance (vs. the actual distance of the course itself). 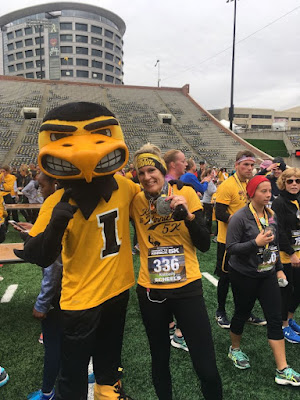 I got to do a quick wave to the Stead Family Children's Hospital...
And, the hubby got to get his pic with the football... 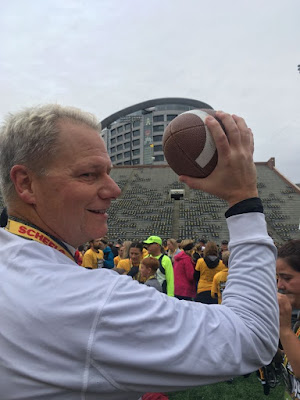 All in all, this really is a great event. Although it's marketed as a race, I would consider it more of a family-friendly run/walk. As I said, this event benefits the University of Iowa Dance Marathon and their work with childhood cancer patients. Ultimately, this race is all about them and not me or my finish time. That said, it is frustrating to have so many walkers crowding the front of the pack at the line-up. While I am so glad they are there, it really is a safety hazard, especially on that downhill right after the start line. 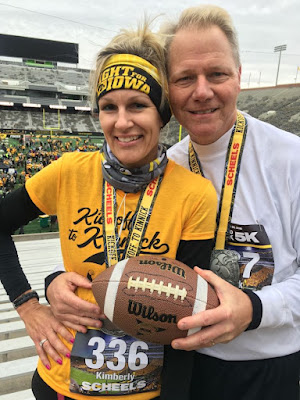 On a side note....my running "gear" came through for me. Although the leggings sagged on me, they never worked their way too far down. And Karma be damned, wearing the event shirt was a non-issue (not that I plan to do that routinely at future races).

Have you done any races that benefit charities? Your thoughts...finisher medals for 5K's? Ever worn the event shirt to the actual race?