It was a cold morning in Iowa, but we had oodles of sunshine and a clear sky.

Sunday, October 21, 2018 was the day, and it was the 17th year of the IMT Des Moines Marathon. There were over 7800 participants (representing 48 states from the US) that took part in the various events over the weekend.


A small twist to my training this year was the Cannonball Marathon happening eight days prior ((gulp)). I almost didn't register for the IMT DSM 13.1 because I didn't think I'd be recovered enough from the marathon. I actually registered for the Mercy Live Up 5-Miler (which was the day prior). About two weeks ago, I decided to just go for it and upgrade to the half marathon. Why not? If I can run 26.2 miles, surely I can do 13.1 miles...the key would be to take things really easy following the marathon so my body could recover enough to make it through the half marathon.

Anyways, race day arrived, bringing with it cold temps....31F at the start line. I have run in temps such as these (many times), but not yet this season. Unsure what would be too warm and what would not be enough, I decided to go with a little of both. Flannel-lined tights under the top layer of capris/socks, flanned-lined tech shirt under a 1/4 zip jacket, gloves and stocking hat.
With an 8:00 start time for the half /full marathons (the 5K started at 8:30), we pulled out of town around 6:30, arriving in downtown Des Moines around 7:30. The hubby dropped us (my running buddy, Barb, and Jim, another local running guru) off, and we found the porta potties and huddled inside an indoor stairwell of a parking garage right near the start line.
Although it felt cold, it didn't feel too bad in the midst of all the runners crowded together. With the marathon behind me, I didn't really have any specific goals for this half marathon. I'd had a pretty mild week of recovery (no major aches or pains, ZERO DOMS to deal with and hardly any running), so I was optimistic my legs would feel somewhat fresh. That said, taking on 13.1 miles was a pretty tall order.... 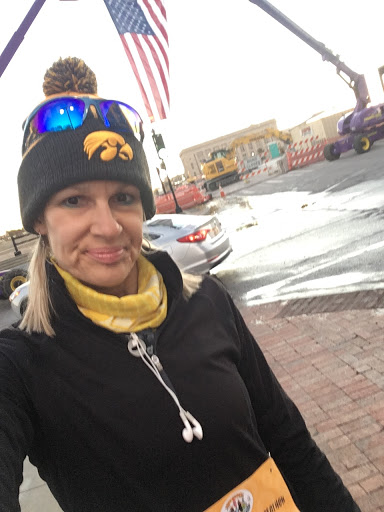 So, the race began. The first couple miles had us winding through some of the downtown streets of the city before heading out on MLK Parkway, eventually splitting apart near the 2.5-mile mark. The full marathoners would continue west on MLK Parkway and the half marathoners' route turned south on  Fleur.

So far, so good. The hammies were feeling a bit stiff/strained, but not uncomfortable. My energy felt good, though, and the crowd of runners was starting to thin out slightly. The crowd support was almost continuous, since the start of the race (and throughout the morning). Amazingly, I wasn't feeling cold, but actually comfortable. Onward!

Just before the 4-mile mark, the route turned right, leading us into Water Works Park. I was ready for a couple of Honey Stinger chews, so the gloves came off (and stayed off). Although I've run this route many times, I always forget how long it takes to get into the actual park along the path. Just after the 5-mile mark, the route takes a right turn and loops around, coming back out just after the 7-mile mark. Once we finish the trek out of the rest of the park, back to Fleur, we're at the 9-mile mark. Somehow, every year, this 5-mile trek into (and out of) Water Works Park seems to take forever, but this year it didn't seem so bad.

After crossing Fleur, the route takes an approximate 2-mile lap around Grays Lake. I dug out an SiS gel and sipped it near the 10-mile mark. I could tell my pace was slowing down a bit, but I still was feeling pretty strong and my energy was on-point.

Coming out of Grays Lake Park, we have the only major hill of the course , starting near the 11-mile mark. It's not crazy steep, but does last for about half a mile. As we merge back out on MLK Parkway, the 12-mile mark is not too far off in the distance. There's a lengthy straightaway, with a left turn just before the 13-mile mark. A short climb, another left turn, and the finish line is just a short sprint from there.

Whew! All done!
For the most part, I felt great the entire race. I could tell my pace was slowing in the final miles, but I never had that yearning for walk breaks (unlike many of my recent half marathons). My hamstrings and my hips (later in the race) were starting to feel fatigued, no doubt much of that was probably still a "recovery"' thing from the marathon a week prior. My goal was to run this race strong, but also by feel...I did glance at my watch at the mile marks, but I had no intention to maintain any specific pace (again, #stillrecovering).

It's not everyday that a race leaves one feeling so good at the finish line. I think my training for the marathon was a factor (because my recovery has been very mild). Also, the weather was optimal and the course (overall) was pretty flat. There was a lot of crowd support, too, and that always makes a long race more enjoyable.

The IMT Des Moines Marathon seriously knows how to put on a great event. As mentioned, this was the 17th year, and they have this down to a science. The course is well-supported with spectators. There are numerous water stands, all of which also have Gatorade available. There's plenty of music (most of which is live performers)  every few miles. There's also intermittent stands with orange slices, Gu gels, and first aid items.

And the swag. In recent years, they have gone to 1/4-zip jackets (different colors depending on the specific distance event), but this year they pulled out all stops and had full-zip track jackets for the full/half marathoners (grey for the full, navy blue for the half). Nice!!
The medals are pretty sweet as well. This year's has an iridescent finish, and is oh-so-pretty. 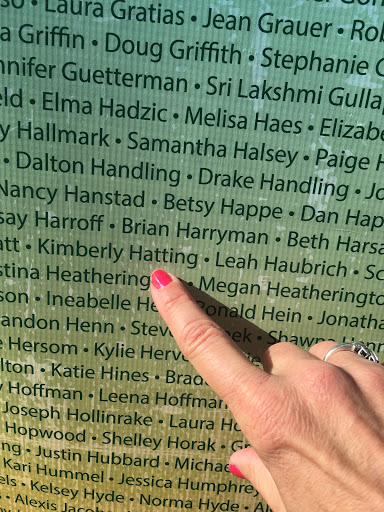 I'm glad I took the gamble and upgraded my registration to the half marathon. Although the route has been modified a bit each year that I have run, it's still basically the same course. I plan to keep on running this half marathon for many years to come. Heck, maybe I'll even return to the full marathon again someday...that is where my PR was earned.

Do you have a favorite event that draws you back every year? What's the coldest race you have ever run?  Have you ever run a full marathon and attempted a half marathon a week later, or vice-versa?

**I'm linking up with Marcia and Patty and Erika for Tuesdays on the Run.
**I'm also linking this with Debbie and Rachel and Marc and Lora for the Running Coaches' Corner
Let's connect : Facebook Instagram  Pinterest Twitter
Posted by Kim at Running on the Fly at 11:46 PM