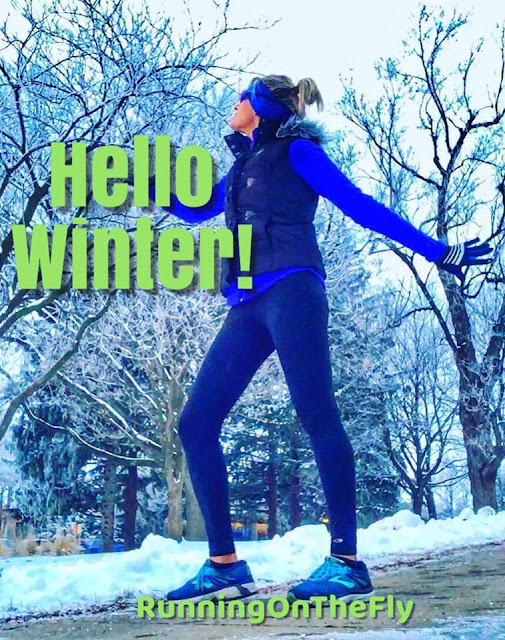 I've said it before...if it's gonna be cold, we might as well have some snow to show for it.  Maybe I should be a little more careful what I wish for.

In all seriousness, though, it really was quite a winter wonderland of a week. Even though I'm a die-hard-all-things-summer-gal, I had a pretty amazing week in said wonderland. And, dare I say, I actually LOVED the experience.

#nevermissaMonday
Monday morning started with 20 minutes of power walking, via the treadmill, and some arm strength work. I tweaked my left elbow a few weeks ago, so I've been avoiding arm work recently. I'm able to do some basic moves again  (hammers and upward rows are still a little iffy, though). But...you do what you're able, right?

Later, after work, I had a pretty amazing experience. With the weekend's snow, and below-freezing temps, the trees had remained "frosty" all day. Sorry, friends, but you will never get this kind of a view from a treadmill. I don't know if was the beautiful backdrop or my joy in being done (after a full day at the office), but my legs wanted to go and I let them.  One of my best runs, ever. My only regret is that I didn't have time to run longer.
A (somewhat) tame Tuesday

It was cold and slick outside, so Tuesday's fasted cardio was a very cautious walk (on a well-lit sidewalk) with Max while the hubby did his morning workout on campus. The real cardio happened later...to the tune of 40 minutes on the elliptical (who, BTW, now has a name... Ellie). It was a distance PR (5 "miles," supposedly). Yay for me.
Wear-me-out Wednesday
Max took me for a 1-mile power walk through the 'hood in the early morning, then after work I got busy. My post workday workout started with 20 minutes on the elliptical, then 30 minutes of arms and shoulder work. Yowza, it's been awhile since I've felt that kind of a burn. Although I was able to hold my arm up and grip my toothbrush that night, everything was throbbing when I hit the sack..
A thriller of a Thursday
I was up and out the door for a #4at515 (when my running friend is out of town, the #5at5 gets slightly modified LOL). Another glorious run in the winter air. It's amazing how tranquil and beautiful an early winter morning is when the wind is MIA. I felt like I could have run forever, so it's a good thing I had a job to get to.
Finally Friday
Another cold non-running day on tap. First things first, I got outside for a 1-mile power walk around the 'hood. Honestly, even on active recovery days, I still love my early morning fasted-cardio routine. I respect fasted-cardio is not for everyone, but the daily 20-30 minutes of (early morning) cardio "something" has been such a game-changer for me with my fitness in the past 18ish months. Most days, I'm able to get outside to make it happen, and the fresh air is intoxicating....even in the deep cold of winter.
Later, after work, I spent 40 minutes with Ellie while dinner was in the oven. Although I'm still skeptical of the readouts on the elliptical (as far as distance and calories burned), I have no doubt on the cardio it's giving me. And, a bonus? The time goes MUCH faster than it does with 'Milly.
Snowed-in Saturday
Well, it was bound to happen eventually.
((cue the Jaws music))
It was cold (-5F with windchill), there was lots of snow (approximately six inches) and the wind was psychotic (16mph). After a slip (and near fall) when I walked Max, I knew what I had to do. Besides, my manicure desperately needed attention. Four running miles with 'Milly (and a bonus walked mile for a cool-down) gave my nails time to set and dry. That would not have been possible under thick gloves had I run outside. Glass half full.
Still stuck inside Sunday
The temps were in the single digits, and the wind was still blowing (netting Iowa with sub-ZERO feels-like temps). No sunshine, and thick snow was falling. I runfess, I thought of heading outside and battling the elements for a brief moment, then white-flagged it and said hello ((again)) to Ellie. Twenty minutes later, I had my fasted-cardio fix for the morning. The hubby and I made it to church, and later watched the Iowa game with Max. And, then proceeded to haul all the Christmas decorations down to the storage room (stair-training and power lifting by default). Don't judge...I have a lot of decorations and I love how the house looks at Christmas time, and I have no guilt in keeping the festive stuff up well past the holiday.
Fitness-wise, it was a pretty nice week. I'm still embracing my off-season and keeping the running mileage conservative (10 miles this week). I LOVE just being able to run and not have any specific distance or paces to hit. As you can see, Ellie (the elliptical) saw quite a bit of action this week (120 minutes; 16 "miles" approximately). And, after a 9-month sabbatical, 'Milly helped me log a few running miles (though her and I have been walking regularly). Wednesday's arm/shoulder workout felt phenomenal; I'm looking forward to bringing more upper-body strength work back as my elbow continues to rehab. Walking is still a big part of my life, especially on the non-running days. Although they're not pictured, there have been (almost) daily bupees happening as well. And push-ups. And leg lifts. And planking.....it's all good!

In case you missed them, here's the posts from last week:
The Off-Season Continues
Running - The Gift That Keeps Giving
Winter Running - Tips, Tricks & Safety

In other news:
#FridayFashionFlair, did you see it on Instagram? Although I'm all about color, I do opt to wear black now and then. As long as I have something bright to wear with it (as well as a funky scarf with dog paw prints), I'm all set. As you can see, my puffer vests aren't just for running. As always, I'd love for you to join me on Fridays....post a pic of a featured outfit, grab the hashtag (#FridayFashionFlair) and give me a tag (@Runningonthefly).

It was Max's 9th birthday on Saturday! His gotcha day is also coming up, on the 24th. We rescued him from a nearby shelter almost four years ago, and he's been such a great little guy! He gets into his share of mischief, but he keeps us smiling on the daily.
Finally, how has your winter been? Did you get hit with a lot of snow, wind and cold temps this week? We had a snowstorm hit Friday evening, and the temps did a major plummet with all the crazy wind that came along with it. And, as this post goes live, the snow is STILL coming down....
So, that's another wrap of another week. Thus far, it's been a strange winter....December saw practically no snow, and January has been pretty dry (until this past week). Alas, this is Iowa. I'm just ecstatic to be enjoying the longer daylight, which means winter will not last forever, right?

Enough about me, tell me about your week....crazy weather? Indoor training or were you able to take it outside? When's your next race?


I'm linking up with Holly and Wendy for the Weekly Wrap. This weekly check-in is such a great place to connect with fellow fitness-minded peeps. Please join us!
Are you following me on social media?
Let's connect : Facebook Instagram  Pinterest Twitter