Have I, by chance, mentioned it's my off-season at the moment? Actually, it's not just a single moment, and there are several moments remaining of this annual scale-back-on-the-running occurrence.

Anyways, not everyone takes an off-season. We all have our preferences with what works for our training. For myself, this includes a brief period of re-grouping during the winter. After all, I don't usually have much for upcoming races this time of year. I don't need "all the running" to maintain my fitness when there's other things that work just as well while giving "all the running" muscles a lighter schedule.


So, here's what went down this past week, as I entertained another week of off-season fitness...

Never miss a Monday
I don't remember how many Mondays I have kept this routine, but it's been going on for a few years. Well, there was a 3-month period (summer of 2017) when I was sidelined from running, but the #nevermissaMonday ritual continued, via power walking. The temps were cold and rainy on this particular Monday, so I did my fasted-cardio, via power walking on the 'mill...in my not-too-glamorous mudroom.
Later, out came the sun and dried up all the rain...but then it went hiding behind the clouds. Oh well, I was able to get outside for a couple of miles around the college campus after work. Besides, you're only cold when you're standing still (or taking a selfie).
Getting-it-done Tuesday

Another cold and damp morning on tap, I decided to keep it inside. I fired up the elliptical, and spent 30 minutes cranking out some cardio (while watching Cheers on Netflix). For what it's worth, I set a new PR for "distance" and made it to 3.5 miles (it's the little things, LOL). As I have said, I am skeptical of the accuracy of the readouts on the elliptical, but I do appreciate how much faster the time goes in comparison to the treadmill. Judging by the sweaty mess when I finish, I'm getting in a good cardio workout regardless. That followed with some burpees, plank jacks, push-ups and planking. Happy (very sweaty) Tuesday! 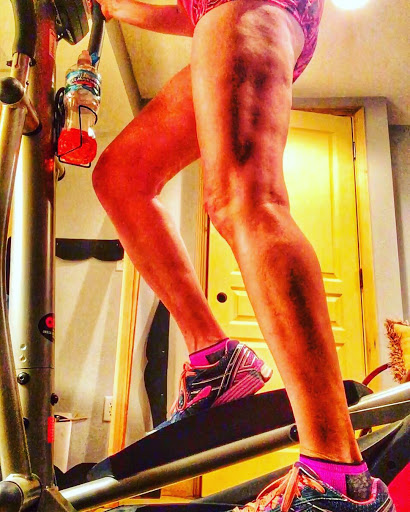 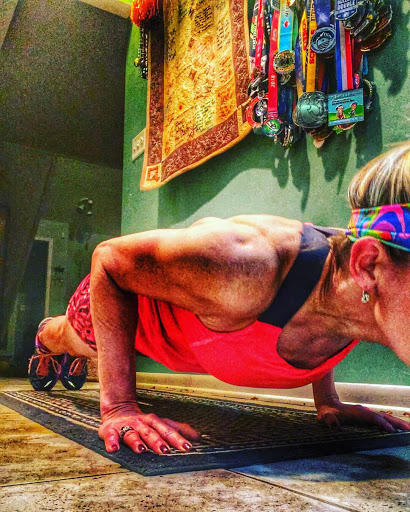 HIIT'ing it UP on the Stairs for Wednesday
Not everyone embraces a stair workout as much as I do, but it was National Take the Stairs Day! We need to celebrate, right? I wrote a new stair workout to commemorate the occasion:

A few notes:
-I chose to do three (3) sets of the circuit
-This took me about 30 minutes, with an approximate 10-second rest between the circuits (for hydration).
-The triple-stepped flights were done in a moderately slow, controlled manner
-Results? 15 total burpees, 30 total push-ups, 90 total flights of stairs (15 of which were "jump-jacked")
-Since 90 was an odd number to end on, I added an additional 10 flights (single-stepped) as a "cool-down." Wouldn't you do the same?
Double-the-cardio Thursday
Another rainy morning at wake-up, so I power-walked for 20 minutes with 'Milly. Honestly, it was one of those mornings when I really didn't feel like getting up, but I did so anyways. After all, I am pretty thankful I get to choose to show up and get my sweat on. Not everyone has that option.
.After work, I laced up and headed outside. Outrunning a train, chasing the daylight and nailing the optimal layers all made for a great, late afternoon run. Even the day-long lipstick was still intact. Those four miles pretty much tempo-paced themselves. I like it when that happens!
Finally Friday
Ugh. The DOMS (delayed onset muscle soreness). Talk about a tricky beast. Just when you think you're in the clear, BOOM! My body felt so achy and breaky when Friday morning rolled around. I immediately declared it an active recovery day, and decided to layer up and go for an early morning walk outside. Although I had run those four miles pretty intensely the evening prior, I think the stiffness and cranky muscles were actually a (delayed) result of Wednesday's stair workout. That said, the 2-mile walk in the crisp air felt awesome. I returned home feeling totally refreshed and the muscles weren't angry anymore. Don't ever discount the power of a walk!
Let there be snow on Saturday!

If I have said it once, I have said it at least 1,000 times...I prefer summer over every other season. Fortunately, we've had a very mild winter, thus far, in terms of snow. That all changed overnight, and there was a thick layer of the white stuff on the ground. We have had the cold winter temps, so we might as well have something to show for it...am I right? Besides, there's something quite satisfying (badazz, if you will) about beating the snow plows and leaving your own tracks everywhere. I also hit the elliptical Saturday evening for 30+ minutes of cardio before lights-out.

Snow-Packed Sunday
I got out for a few miles Sunday morning, then the hubby and I shoveled out my (vacationing) sister's driveway (for 45 minutes, thank you very much). Anyone know an approximate calorie burn for snow removal? Fortunately, it wasn't a wet snow, but it still was very dense and heavy. Glass half full, my fasted-cardio was probably off the charts. All the bending, stooping and squatting (and heave-ho'ing of snow) served as my stretching/cool-down. Don't be jealous.
So, overall, it was a solid week. It was very cardio-heavy, but I'm counting the stair workout as a bit of a strength session with all those triple-stepped flights. I tweaked my left elbow a couple weeks ago (not sure how), making it difficult to do arm work right now, so I have been avoiding that recently. Total mileage this week came to 25 (11 running/7 walking/7ish elliptical). I'm doing daily planks, leg lifts, push-ups, burpees and wall sits as well, but am considering switching some of them to alternate days. Stay tuned...

In case you missed them, here's my posts from last week:
Running into the New Year
2019 - Bring It!
Plyo-Infused Stair Workout

In other news:
Did you catch my #FridayFashionFlair post? Every Friday, I post a pic of a featured outfit on Instagram. I've been doing these for a couple of years. Why? Although I'm a runner and fitness enthusiast, I am not dressed in athletic attire 24/7. I also have an #artgeek mind and a love for all things color and fashion. Besides, it's fun seeing what my fitness friends look like outside of their fitness regime. That said, this week's outfit featured a current winter season favorite of mine, a shawl wrap. This particular one even has arm holes, so it is work-desk-functional. You're always welcome to join the party and post of pic of your own....just be sure to grab the hashtag (#FridayFashionFlair) and give me a tag (@runningonthefly).
I have had several people ask, and I have carefully avoided any direct answers, as to what I have in mind for a marathon this year. This week, I revealed the proverbial elephant in the virtual room. Ready? I am hoping to take on not just one, but two, marathons in the fall. The Air Force Marathon (Dayton, OH, Sept. 21) has long been on my radar. And, the Marine Corps Marathon (Washington, DC, Oct. 27) is a no-brainer. I have not yet registered for the AFM (a few logistics to finalize) and the MCM is lottery-dependent, but I am so excited to take on the challenge of back-to-back marathons!
And, finally, if you're on Facebook, you probably have seen the latest craze...the How Hard Did Facebook Age Me thing. By posting your first-ever profile pic alongside your current profile pic, you (and all the Facebook world) can see how much (if any) you have aged. So, yes, I fell victim...the pic on the left is from NYE 2008 and the other is from late summer 2018. I don't think I have necessarily lost (or gained) any weight, but I definitely have a lot more muscle tone and I've run a lot more miles (and a LOT more races). I think I am doing alright.
Well, that's a wrap on the latest and greatest. How has the new year been treating you? Any crazy weather? Staying inside or opting outside? Any races coming up?

I'm linking up with Holly and Wendy (and this week's guest host, Kim) for the Weekly Wrap. This weekly check-in is such a great place to connect with fellow fitness-minded peeps. Please join us!
Are you following me on social media?
Let's connect : Facebook Instagram  Pinterest Twitter
Posted by Kim at Running on the Fly at 12:20 PM