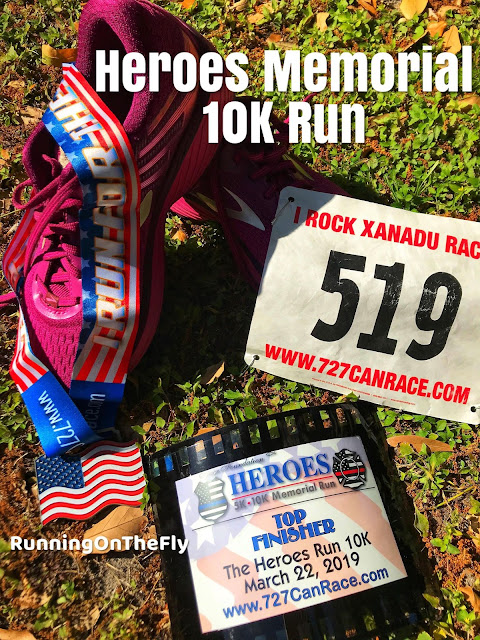 Be careful what you wish for.

Recently, I made the comment that with my three March 10K's, it would be kind of cool if I could run each of them faster than the previous ones. Hmmmm...

Don't get too excited, I've only done two of them thus far. Although I was able to run the second one, the Heroes Memorial 10K Run, 1:22 faster than the first one (The Leprechaun Chase, March 9th), it's a pretty tall order hoping to run the third one (The Chocoholic Frolic, happening on March 30th) even faster.

Anyways, here's the recap of the Heroes Memorial 10K Run, which I ran last Friday evening (March 22nd) while on vacation in Florida....

When we made plans to head to Tampa for Spring Break, like a lot of runners, I searched for an area race. Several things intrigued me about this particular race, but the main one was its tribute to the St. Petersburg area law enforcement and fire/rescue personnel.
A unique aspect of this event was that it took place on a Friday evening. They didn't offer an early packet pick-up option (on the day or evening prior), but everything was set up and ready by 4:00 p.m. for the 6:30 race start. We arrived on the scene around 5:30, which was ample time to get my race bib and shirt (actually a tank top) and sign the waiver.

The hubby wasn't running, but was planning on checking out a few nearby stores while I did the race. I found the registration stand, got my stuff and ran (literally) back to the car to leave the race shirt with him before heading back down to the pre-race activities near the start line.

I took my time stretching and doing some dynamic warm-ups.  I even did a short run to loosen up my legs a little more. 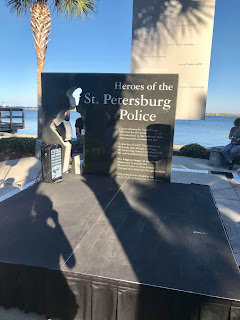 There was a brief ceremony, honoring the committee and some of the police officers and commanders, and then we headed to the start line. All the 10K participants lined up first (the 5K peeps would be starting a few minutes later). The National Anthem was played, and we were off!

Right out of the gate, I had a good burst of energy, but I was already feeling pretty thirsty. I had been hydrating all day, and although the temps were warm, they were not unusually hot. Even though I have run a lot of races of various distances, I am never able to gauge my pace in that first mile. I could tell I was moving along "comfortably fast," but it didn't feel like I was going unusually fast.

There was a guy who started near me, and (little did I know) he and I would be playing a crazy game of Leap Frog for the entire race. He and I were neck and neck for the first half-mile or so, then he eased a little ways ahead of me. I think it was near the 1-mile mark that I gradually veered around him. I checked my Garmin and almost gulped when I saw my first mile split was an 8:16 pace. OOPS. Major oops. That was a bit too fast for the first mile of 6.2-mile endeavor, at least for this runner.

Pretty certain I wouldn't be able to hold that pace for the entire race, I knew I needed to make a conscious effort to ease up in the second mile. I don't consider myself an especially fast or gifted  runner, but with my longs legs (and naturally long strides), it's really tough to pull back. I prefer to run based on feel, as opposed to letting the Garmin dictate my effort, after all.

The first mile had taken us out of Demens Landing Park and along Bayshore Drive, in downtown St. Petersburg. I couldn't help admiring all the sail boats in the harbor as we made our way over the brick-paved streets.

By the time I'd reached the 2-mile mark, my thirst had me a bit worried. I didn't know if it was from the warm temps (which felt rather pleasant, but still quite a bit warmer than what I'd been experiencing back in Iowa) or from the (stupidly) fast pace of that first mile. I grabbed a cup of water and walked for a few seconds as I drank it, all of it. I had been able to slow down my pace, though I suspect that was more from sheer exhaustion (from going out too fast) than it was concerted effort of "slowing down."

Another unique twist to this race was the award system. We had been briefed, on the website, at registration, and at the pre-race announcements, there would be awards for the first 25 male and female finishers (in both the 5K and 10K) instead of age group awards. As I was approaching the turn-around, just after the 3-mile mark, I realized there were only 12 or 13 gals ahead of me...I couldn't help but wonder if there was a chance of me snagging one of those top 25 awards. My pace had finally felt like it had evened out, but I was still leery of that first mile coming back to bite me before I reached the finish line.

The guy and I continued our little game, but I eventually was able to get ahead of him (not that it was a goal of mine) and then didn't see him for awhile. The third mile had taken us into a residential area, with a few slight curves. I had started to see a few of the lead runners coming back from the turn-around, and started trying to count the females (to get an idea on how many gals were ahead of me).


A short ways after the turn-around, I spotted my Leap Frog friend. He really wasn't very far behind me, so his pace was pretty close to mine.

I grabbed another cup of water, near the 4-mile mark (which was the same water station as we'd had at the 2-mile mark). I drank that entire cup of water, as well, because I was so thirsty.

As we came upon the sailboats, back at the harbor, the Leap Frog guy passed me (again). By then, I was starting to feel some strain in my legs, especially in my hamstrings. I knew we didn't have too much further to go, so I just tried to keep my pace steady.

It doesn't seem to matter what distance I'm running, the second-to-last mile always seems to take the longest (whether it's at mile 2, 5, 12, or even 25). This race was no exception. I kept glancing at my watch, and it took forever to (finally) reach the 5-mile mark. And - wouldn't you know? - I could feel myself gaining on the Leap Frog guy again. He wasn't very far ahead of me (not even half a city block), but either he was slowing down or I was speeding up slightly (both?).

I passed him about half way through that final mile. I was on a quest to just get to the finish line because I was starting to feel tired. A few gals had passed me, and I'd lost count on where I was in relation to everyone else....and at that point, it didn't really matter. I was pretty certain I was still within the first 25 of the gals, though.

Thankfully, my legs got a little bit of their mojo back and I was able to finish strong. I turned the final corner, and gave it all I had left in me to get to the finish line.

I made it through finish chute, and as I was clicking off my watch, a gal came up to me and handed me a slip of paper and said, "Congrats! You're a top finisher for the 10K!" She told me I could get my award by turning in that piece of paper at the awards table. Wow, so I'd done it after all (it turns out, I actually was 20th). A few steps further, another gal handed me a bottle of water, and a third gal gave me a finisher medal.
My Garmin showed a finish time of 54:56 (for 6.22 miles), but my official time was 54:51 (according to the results). I was good with that. More than good, actually. It had been a few years since I'd been under 55 minutes for a 10K. This almost felt like a small miracle. 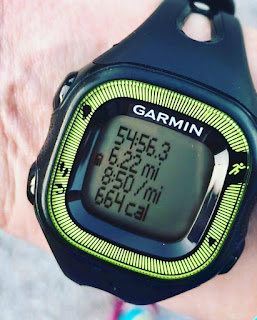 All in all, this was a great event. There were numerous on-site volunteers, and the two water stations were well-placed so they could be utilized on both out and back segments of the route. I think it's important to honor our law enforcement and fire/rescue personnel. Personally, I always make a point to say thank you to as many of them as I can during a race...really, it's the least I (or anyone, for that matter) can do.

The finisher medals are nice, and have a bit of an iridescent sparkle, I just wish they had the actual name of the event (instead of the race management company) on the ribbon. The Top Finisher awards are a nice touch.
And, I like the option of a tank top (for women). I really am done with race shirts.
Finishing in the top 25 (there were 63 total women in the 10K) was exciting. That said, it was my individual finish time that I'm the most proud of. I didn't spank a 10K PR, but I came within a few seconds of doing so. More importantly, despite the constant thirst my mouth was feeling, I felt pretty good for the entire race. I'm grateful I was able to run a steady race in warm weather conditions (it was near 70F), and in the evening hours. As we all know, how you place is usually contingent on who else shows up. If you run strong and are content with your finish time, it really doesn't matter how that compares to anyone else.

Have you ever run a race while on vacation? Ever done an evening race? Would you choose a tank top over a shirt, if given the option?