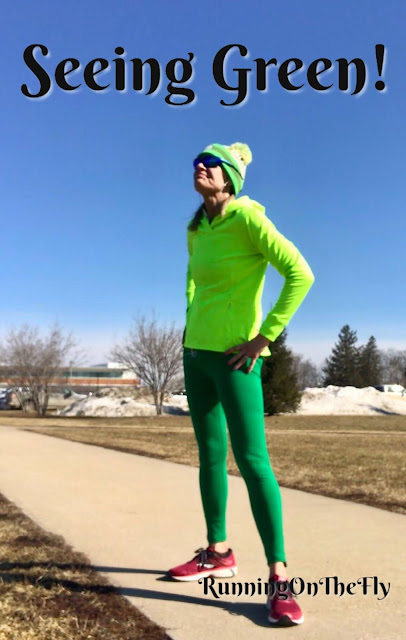 Ahhhh, it was bound to finally happen...

Not only have I been guilty of wearing it (umm, hello, St. Patrick's Day!), but the dirty snow has been melting and there's ever the hint of green grass emerging! Call me crazy, but it's looking a little more like Spring!!!

Welcome to the Weekly Run Down! I am so excited to host this link-up with Deborah (from Confessions of a Mother Runner). If you write a fitness-based blog, you're invited to join the party. The link-up opens at 1:00 (EST) on Sundays and remains open through Monday (noon). Please share your weekly fitness endeavors, training highlights (or low lights) and race recaps. We ask that you link back to both hosts, and we encourage you to read/comment on the other linked blogs as well.

Although the temps were still feeling a little more like Winter this week (and a little less like Spring), all in all, things definitely started to head in the right direction. With all the rain from the previous weekend, as well as a few intermittent showers this past week, the bulk of our snow has melted. Most of the streets are fairly dry (though there is a lot of residual sand). And, best of all, the stubborn ice has bit the dust.

And, best of all, I was able to log more miles outside than inside!!!!! My half-full glass has pretty much runneth over.

Never (ever) miss a Monday
With warmish temps forecast for later in the day (and some DOMS going on from the weekend's race), I opted for a 2-mile early morning walk outside. By the time I was off work, everything felt great, so I met Barb (Remember her? My fav running pal, who has been recovering from knee surgery?), and she and I knocked out four fabulous miles in the late afternoon sunshine.
Take-it-easy Tuesday
Rain was in the forecast, and I was due for an easy day. I got out for a short walk, before work. Later, there was a break in the rain after work, so I was able to take Max, our dog, for a short walk as well. It's been awhile since I've been able to just go for a walk outside, and it felt great to breathe in all that fresh air. I also did some upper-body strength work in the evening before lights-out.
Womp-Womp Wednesday
Temps were cold and rainy and foggy, not the best setting for solo miles, outside, at 5:00 a.m. So, hello (again), Milly. This was my 20th running date with Milly (for 2019). It wasn't terrible, but it wasn't exciting either. Four miles. Even with negative splits, it felt like each mile took longer than the previous ones. Oh well, I know my treadmill runs will be winding down....I think I can see the light at the end of this extensive treadmill tunnel....
A very thankful Thursday
For those who don't know, Thursday was my birthday. For the past several years, I've been doing a "Pi run." I'm not only celebrating another voyage around the sun, but also honoring the significance of the day (I was a total math dork when I was younger, but this National Day of Pi wasn't mainstream back then). Again, we had rain in the forecast for most of the day, so I headed out just before 5:30 a.m. and was able to complete those 3.14 miles outside.

Finally Friday
Believe it or not, it was freezing (quite literally), again! Neither the 22mph wind nor the sub-freezing temps were beckoning me outside...so I did a quick 1-mile walk with Milly and called it good. I didn't even feel compelled to snap an outdoor selfie in protest...but I did embrace the challenge of making another routine treadmill selfie a bit less boring with some pic filter magic. It's the little things, right?

Super Sensational Sunny Saturday
After a bit of a sleep-in, the hubby and I took Max for a 2-mile morning walk. Actually, Max was so excited to be back on his leash (and not just doing his morning business in the backyard), he pretty much lead the way. Afterwards, I changed shoes and took it to the streets for eight miles of running bliss. Oh, how I have missed my outdoor running!
A Snowy Surprise on Sunday!
Guess what greeted Iowa on Sunday? A fresh layer of overnight snow! Well played, Momma N, well played. No complaints on my end because I really have not had many runs in the snow this winter. I ran a short, easy-paced 2-mile recovery run, which was quite tranquil in the snow-covered setting.  It's no secret I'll gladly choose a peaceful run in the snow over another monotonous tread on the 'mill.
So, to say that I'm pleased with this past week would be a dramatic understatement. The running miles came in at 21 (my highest mileage week for 2019!), and most of those were run outside (total win)! There was a great deal of walking (12ish miles), and  most of that happened outside as well. I skipped the lower-body strength work this week, in exchange for those extra birthday miles, but did sneak in a brief upper-body session mid-week. All is well.

In case you missed out, here are the posts from last week:
Spring Ain't Here...Yet
Favorite (new and not so new) Fitness Trends
A (very rainy) Leprechaun Chase 2019

In other news:
Did you catch my #FridayFashionFlair post this week?  The temps still felt winter-like, but the snow continued to melt, and there was all kinds of sunshine. I opted for a favorite sweater for warmth, but cold shoulders for wishful thinking of the warmer days ahead. You do what you gotta do. Anyways, as always, the invitation stands for those who want to play along...(1) post a pic of a featured outfit, (2) grab the hashtag (#FridayFashionFlair) and (3) give me a tag (@runningonthefly).

And, last of all, as mentioned above...I got to celebrate another voyage around the sun on Thursday. The day was full of all kinds of great things..... the 5:30 a.m. Pi Run, early morning messages from my kids, a fun day with co-workers, dinner with family, a rescued balloon from a very high tree branch (thanks to the hubby) and many, many texts and birthday wishes via social media. The day left me feeling quite humbled and so incredibly grateful. 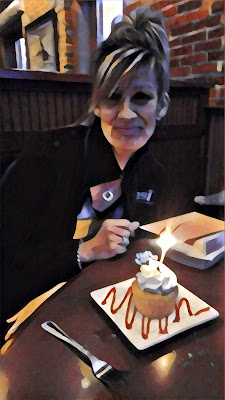 So, that's another run down of another week. Talk to me....how was your week? Any brag-worthy fitness moments? Is it starting to feel like Spring where you are? Have you ever done any kind of a commemorative run for your birthday? Do you celebrate St. Patrick's Day?

You are invited to the Inlinkz link party!
Click here to enter
Posted by Kim at Running on the Fly at 9:28 AM