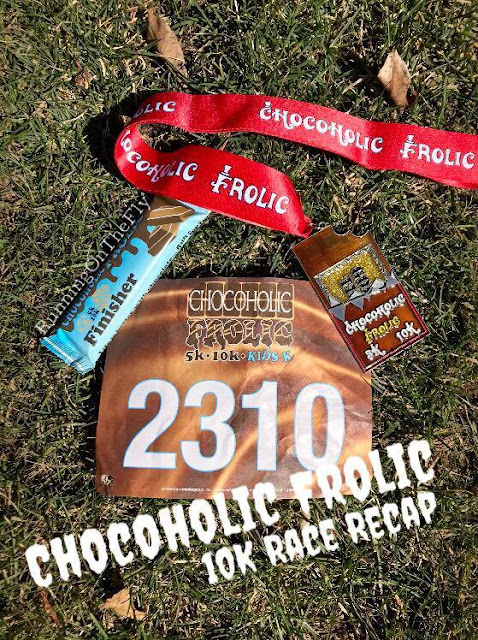 I'm all about chocolate. I'm also all about running.

But I have never done a chocolate-themed race.

Enter the Chocoholic Frolic.
I was approached, several months ago, about being an ambassador for the Iowa City venue. In exchange for promoting the event on various social media channels and shout-outs, I received some swag and a free registration (I opted for the 10K, but there also was a 5K race as well as 1K for the little ones).

Since I already had a few other 10K's on the roster, as well as the Credit Union Cherry Blossom 10-miler, another 10K thrown into the mix would fit nicely with my spring schedule. The more, the merrier...am I right?

Race morning dawned with moderately cool temps (high 30F's), but intermittent sunshine. There also was quite bit of wind...like 20+mph wind, thank you very much. At least it wasn't raining or snowing, as had been forecast earlier in the week (glass half full).

The race course was an out-and-back route, along a paved trail at the Terry Truebood Recreation Park. The 5K and the 10K shared the same course, only the 5K route had its turn-around earlier.
Typically, I honor the notion of  "nothing new on race day," but I chose to make an exception for this race. The red 1/4-zip jackets were so cool, I couldn't resist! I'm a big believer in bright colors, after all, so race day karma be damned.

I got to the race site with plenty of time to use the (indoor) restroom and do some dynamic stretching and warm-ups. As we stepped outside, to line up, I instantly regretted not wearing an additional layer (I already had a fleece-lined base layer under the race jacket) because the wind felt so cold.

The first mile was a partial loop around Sand Lake. What started as a tail wind, quickly became a ferocious cross wind and then a powerful head wind as we rounded the lake. As we approached the 5K turn-around (near the 1.5-mile mark), we entered into a bit of woodland setting, giving us some shelter from the wind.

There was a water stand (stocked with water AND chocolate) at the 5K turn-around. I grabbed a quick drink of water and continued onward.

I'm never, and I do mean NEVER, able to gauge my pace in the first mile of most races. I run based on how I feel, so I'm usually running "comfortably strong." Sometimes, that comfortably strong pace gives me a much-too-fast start; sometimes it has me at an easy pace that will not burn me out too quickly. Having just run a 10K (on a warm Florida evening), I was secretly hoping to beat my finish time...but knew I needed to go out much slower than I had done eight days prior at the other race.  I had glanced at my Garmin and saw the first mile was at 8:29, which is moderately fast for me, but not in the danger zone.

I knew I would need to ease up a bit, though, to get through the remaining 5.2 miles. As I made my way towards the 2nd mile mark, the route started to curve and I could feel the wind (again) in my face. We did have some shelter, among the trees, but the wind was still very much a force to be reckoned with.

The trail through the park was nice! I'd imagine it to be quite scenic with leaves on the trees and renewed vegetation, later in the season. Eventually, I made it to the 10K turn-around, and breathed a huge sigh of relief as I grabbed a cup of water. Having fought the wind for the previous (almost) two miles, it was nice to know I'd have a tail wind for awhile on the return trip back.

Although I had been cold at the start, I warmed up quickly, especially after getting past that first mile around the lake. I glanced at my watch at each mile-mark, to reassure I was (hopefully) staying near a 9-minute pace.

As I passed the 5-mile mark, I could feel my legs start to move a little faster....until we were back out in the open...going back around the lake. Holy Frozen Face, Batman! That wind was brutal! I had kind of forgotten about my pace as I put all of my energy into fighting the crazy head wind, and it felt like I was barely moving because the wind was so strong.

I kept my head down, and just kept pushing forward, hoping the wind would lighten up for just a minute (spoiler alert--it didn't). I saw the timing clock above the finish line, and thought it read 55:xx. Not a PR, but definitely a decent finish considering how crazy the wind had been. I clicked off my watch. A gal handed me my medal (with a candy bar), and I made my way towards the building, eager to get inside!


It wasn't until I got inside, and saw my official finish time, that I realized what I'd just done. My Garmin is difficult to read with my sunglasses, so I hadn't gotten a good vision of what it actually said...it hadn't said 55:xx (and neither had the timing clock outside), it had said 53:59!
What's more, when they pulled up my official time...it showed 53:57, and that I'd gotten first in my age group. Wow. Seriously? Honestly, I was in such disbelief, for several minutes. I had run the Florida 10K in 54:51; that race had felt hard, but it also felt like I ran it "faster." To have run this 10K, almost an entire minute faster, when it seemed like I was barely moving (due to the wind) left me dumbfounded.
In addition to the 1st place AG (out of 7 other gals), it showed I finished 33rd out of the 97 total 10K participants. I suspect, had the weather been a teensy bit warmer, there would have been more participants. The 5K had 212 finishers (some of which were walkers).

Over all, I thought this was a neat event. The weather was a buzz kill, but that's at the mercy of Momma N. Although there was plenty of race information (regarding packet-pick-up, course maps, etc.) on Facebook, I would have liked some pre-race communication, via email. First world probs, I know, but I have gotten spoiled by email alerts and reminders in the weeks/days leading up to race day.

The chocolate along the course was a nice touch (though I didn't grab any of it). The medals are nice, though they do not indicate the particular venue (there also were 5K's/10's recently in Sioux Falls SD, Appleton WI, St. Paul MN, Dallas TX and San Antonio TX)., but that's not a deal breaker for me.
The race jackets are light-weight, and oh-so-colorful! I like that the logo is actually a sewn-on patch and not just a vinyl imprint.
A few keeping-it-real notes:

***Initially, I thought this was a 10K PR for me (having believed my current PR had been in the 54:xx range). It turns out, upon digging through several old race bibs, I actually ran a 10K in 53:46 (2012). That was before I had a Garmin, and it was a (somewhat) small-town event...so I have no idea  how accurate the distance actually was on that other race course (and never will know).

***It took me a couple days, but I realized that this 10K course was actually a bit short. According to my Garmin, the course was 6.14 (and not 6.2), but my pace still was a tiny bit faster than that previous Florida race (ha ha! So, I'm still quite content on my finish time).

Have you ever done a chocolate-themed race? Ever fought the wind and ran a surprisingly fast time? How do you feel about the 10K distance...too short, too long, or just right?