I certainly never could have seen this coming.

So many miles (many of which happened in the wee hours)! It got my heart pumping, I was blessed with some fasted cardio, and there was plenty of sweat equity earned along the way.

There were some flat routes, and there were many hills climbed as well. My endurance, as well as my grit, was tested on numerous occasions. And, each time I finished...feeling quite accomplished.

I'm talking about my new fitness fix - biking. And it has been a total game changer for me this summer.

I won't go into a lot of details on how this has evolved (you can read about that HERE). After all, I'm still in a state of disbelief at all that has transpired in a relatively short time.

All of this was a non-issue until June 23rd. That's the day the hubby asked me if I wanted to ride with him (and one our friends) out to the lake west of town. From our driveway, it's approximately a 15-mile round trip. And it's quite hilly. My first thought was to laugh in his face (literally), then 30 seconds later, I decided to go along. 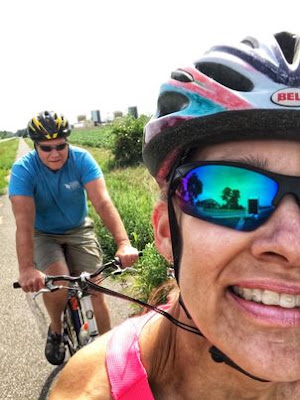 I had ridden this route before, several times actually. I just had not ridden it in awhile. I think I rode my bike maybe once (or twice?) last year. In 2017, I was recovering from my surgery, so I did ZERO biking until very late in the season. I still didn't have full range of motion in my knee, at that point, so the rides were very short and there weren't many of them.

Ever since that fateful day in late June, though, things have changed.

The hubby and I did a few weekly rides to the lake, and I started to enjoy the challenge of conquering those hills.

A few weeks later, Michele (a friend from work) started joining me on Friday mornings. 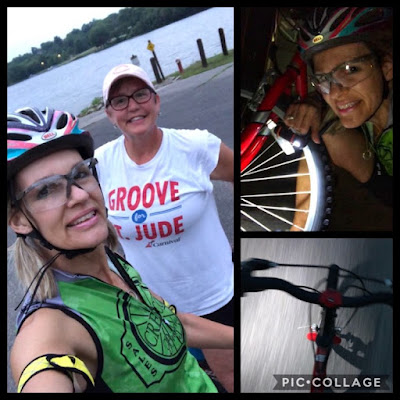 One week, when Michele was out of town, my main running gal pal, Barb, came along with me. Did I mention these Friday morning rides start at 5:15 a.m., in order for us to get out to the lake and back and still have time to get to work? 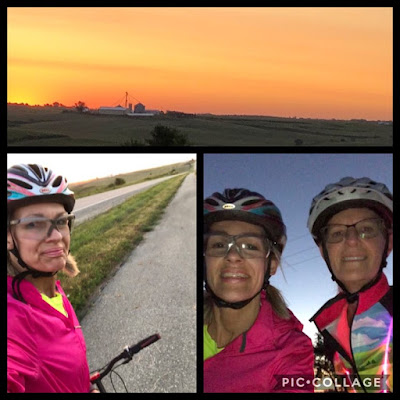 Throughout all these early morning rides I discovered that biking really felt great on my legs, especially on my non-running days. It gave me a bit of cross-training, but also a chance for my running muscles to have some down time. It's no secret I love being outside, so this was a win-win.

In recent weeks, I have been doing 10-mile rides a couple times during the week. These are done in town, so the routes are fairly flat. 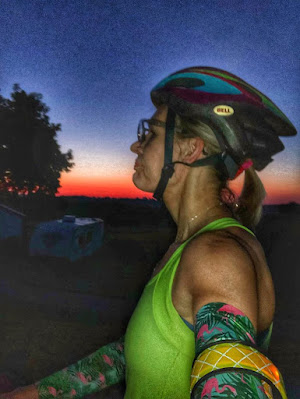 I have continued the weekly 15-mile rides out to the lake (on the hilly bike path). As this post goes live (early Friday morning), I will be finishing my ninth consecutive ride to the lake. Yikes. Who am I?

Ironically, I have done this 15-mile ride prior to two of my July races, and both races went quite well. I rode the 15-miles (and five bonus miles) on the morning of the Midnight Madness 15K. That evening, I PR'd both the 5K and the 10K. A couple weeks later, I did the same hilly 15-miler the day before the Bix-7, and PR'd that race as well. Coincidence? Maybe...but I can't help but believe biking has enhanced my running.

I should mention that I'm also in the midst of training for the Marine Corps Marathon (October 27th). This is my ninth marathon, and the first one where I have been consistently biking while running all the miles. The main thing I have noticed is that my recovery time, after long runs (and intense speed work), has been SO much easier. 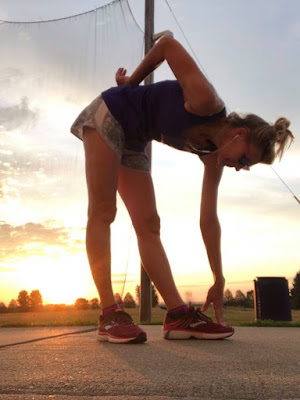 So, that's my story and I'm sticking with it. Hard to say if I'm just having a lucky summer, or if I'm on to something with all of this biking. Just since June 23rd (the day I took that first ride out to the lake with the hubby and our friend), I have logged 313 miles in the saddle. I realize many cyclists knock out that kind of mileage in a much shorter time span, but for this biking novice, that's a major number.

Now, the big question - Will I continue with all this biking as MCM training intensifies? The marathon is still two months away, and in the next 5-6 weeks, my running mileage will be peaking. Also, the daylight is dramatically dwindling...these early morning rides are seeing less and less daylight as the sunrise is happening later and later. We ride on a bike path, off road, but it still is dark for the first few miles. It's not ideal, but (so far) it's been working. Stay tuned.... 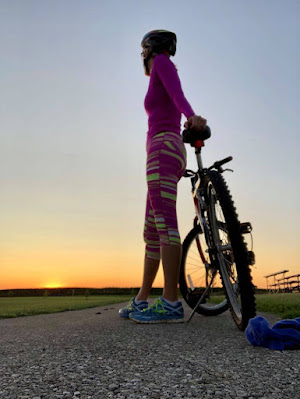 Have you ever fallen head-over-wheels (not literally LOL) for biking?  If you've trained for a long-distance race, did you ever use biking as a recovery vice on your non-running days? What's the highest weekly/monthly mileage you've done on your bike?