Perhaps I should elaborate, a bit? We're talking fitness, after all. Some of these moments were fun and freaky, some demanded unexpected flexibilty with my schedule, and there may have been a few (or several) filters used in the pics highlighting said moments.

Anyways, here's the latest Weekly Run Down from my little world of fitness:

Monday - key words: fog and fast
Let's just say, it looked rather eery and foggy when I headed out for my #nevermissaMonday run at 5:30a.m. It actually looked more like a horror film setting with all the heavy fog blurring the light from the street lights. I ran three miles (with 1/4 mile surges), but decided to keep it on the college campus where I'd have lamp posts every 20 feet or so.
Tuesday - key words: fog (again) and fatigue (courtesy of Toby Keith...see below)
After a rather fun-filled late evening, my energy level was pretty low. Tuesdays are typically an active recovery day for me anyways, so not a big deal. I saddled up Gustavas and rode 10 miles before heading to work.
Wednesday - key words - fatigue (again) and feet (as in blisters...ouch!)
Despite another late night spent at the Iowa State Fair (with my friend, Barb, none the less) the weekly #5at5 was still happening. The temps were somewhat cool (low 60F's), and the air a bit humid, but the run went surprisingly well considering our lack of sleep.
Thursday - key words: fatigue (yet again) and flexibility (with my fitness routine)
By Thursday morning, I was about nine hours behind on sleep (from Monday's and Tuesday's evening antics at the fair). Usually, I'm doing HIIT or speedwork on Thursdays, but there was no way that was happening with my tired body (and foggy mind). Also, with both of my early-morning fitness buddies (as well as the hubby) out of town on Friday, I wouldn't have anyone to ride with me out to the lake. I decided to go for a 10-mile ride (in town) instead and skip the intense workouts for the day. Turns out, it was the best morning ever. Had I ridden to the lake, I would have had this glorious sunrise at my back....isn't it a beauty? Don't worry, that pic is the real deal (#nofilterneeded).
Friday - key word: fatigue (still!)
How did I know I was still feeling quite fatigued on Friday? Well, (1) I didn't wake up before my alarm and (2) I actually dozed back to sleep for almost another hour! That said, my 3-mile run actually went well, and a bonus of over-sleeping was that I got to enjoy full daylight for the entirety of those miles (#glasshalffull).
Saturday - key words: freaky (as in clouds), family and (total) fulfillment
With Barb still out of town, I was batting solo for my long run. I have done many long runs alone before, so it's not a big deal, but it had been a long time since I'd run more than 10 miles without anyone to talk with or keep me on task with my pace. Alas, I was up at 4:30, and out the door by 5:05. Since it was dark, I kept the first seven miles close by...looping around the college campus (clockwise, figure-8, counter-clockwise...you get the idea LOL). I stopped back at the house for a potty break and fuel, and finished the remaining seven miles without a hitch (well, except for my Garmin dying at the 12.5-mile mark and the crazy clouds threatening rain). This run really felt good, though my mile splits (the ones before the Garmin died) were a bit scattered. Later, the hubby and I had breakfast with the PA daughter (back in the area for more training at her company's HQ).
Following that, he and I rode the 15-mile hilly bike path to the lake (so, yes, a double workout day for me). The other daughter surprised us with a quick visit, and then we headed out to meet up with the son for some shopping and dinner. A long day, but getting to spend time with all three kids was fantastic! Absolutely NO regrets.
Sunday - key words: Fate, fatigue (have I said that yet?) and flexibility
I'm a strong believer in the universe talking to us...and I do my best to listen. Case in point, I crashed on the couch (Saturday night) a couple hours before my usual bedtime. Then, I slept-in a good three hours later than normal. I also awoke to heavy rain...so the routine recovery run got postponed. Instead, I opted for some extra stretching and TLC. I'd still call that a win-win.
...and, by late morning, out came the sun and dried up all the rain. I got out for a couple of easy-paced miles, and my recovery run was complete. The afternoon also included several garden squats in the sunshine.

So, a crazy week! I seriously think I spent the majority of the week in a continuous state of fatigue (and blistered feet). Thankfully, the running went well,  27 miles for the week are in the bank. There was some substantial walking (14 miles at the time this post goes to press), and the biking continues to be my new favorite "recovery" fix...35 total miles in the saddle this week.as well. Unfortunately, there wasn't much else happening...there was daily planking, lunges (part of a 2-week challenge group) and intermittent push-ups, but that's all she wrote. I'm totally fine with that, though. Speedwork, HIIT and strength-training are regulars in my regimen, so skipping them once in awhile is not gonna set me back in any capacity. Onward!

In case you missed out, here's what went down on the blog this week:
There's the SUN, Let's get it DONE
Running - Doing it My Way

In other news:
Friday Fashion Flair!   In going with the "F" theme, I could feature (see what I did there?) the word freezing, because it's always cold in my office.  Thankfully, I have a slew of cardigans at my disposal to keep me (somewhat) warm in the heat of summer. I could have grabbed the standard solid black cardi, but why not go with the black and white cheetah print? It adds a bit more interest and funk to the kiwi green tank. As always, the invitation stands... join us with a pic of your Friday outfit. Grab the hashtag (#FridayFashionFlair) and tag me (@runningonthefly).

The Iowa State Fair!
As mentioned, I went to the Iowa State Fair, not just once this week, but twice. The hubby, youngest daughter (and boyfriend) and I saw Toby Keith on Monday evening, and he put on a fantastic show. I'm not much of a country music gal, but I do like his style because he's so quirky. He's also done a lot of USO work, supporting our troops overseas, which I totally admire and respect. My hubby served for 31+ years, after all, so my appreciation for the military is strong and quite personal. Funny story...since this was a big-time "country" endeavor, I felt it appropriate to dress the part. I borrowed the glitzy boots from a friend, and my poor feet paid a dear price (numerous blisters, even with socks on). But the boots were fun and I'd do it all over again (fashion before function). 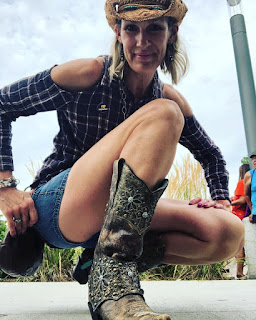 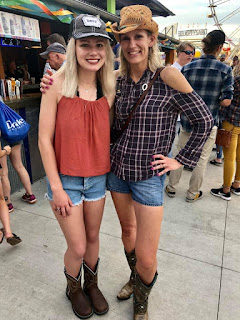 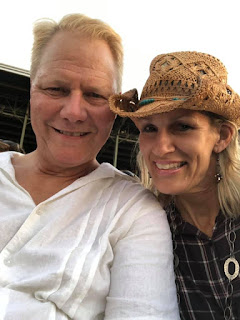 On Tuesday night, Barb and I went back to the fair, this time for a rock concert (any Midwestern friends heard of Hairball?), and met up with another friend. Holy Loud Music, Batman...my ears were still ringing on Thursday morning!  My phone's pedometer must have thought I was walking nonstop, giving me credit for 2+ miles of walking EACH night (though I actually may have been dancing to the music LOL). Both nights were fun, but we didn't get back home until well past my (usual late) bedtime. None the less, I'd gladly do that all over again, too.
So, tell me about your week! Are you in training for a big race? Did you have an unusually large amount of fog this week, too? Ever gotten major blisters from borrowed boots? Would you sacrifice sleep for a great time with friends?

You are invited to the Inlinkz link party!
Click here to enter
Posted by Kim at Running on the Fly at 10:35 AM