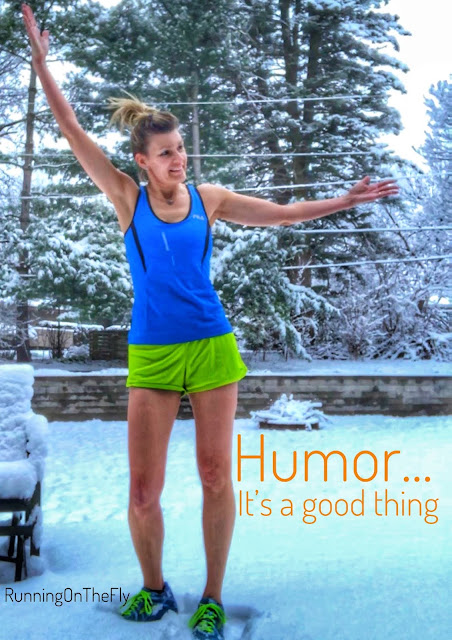 Give me some humor and no one gets hurt.

That's right. A sense of humor is a good thing. It's also a valuable weapon, in one's arsenal, when forging through the unexpected challenges that get thrown at you.

If there ever was a time for an endearing sense of humor, it would be this week. For starters, we're talking major instability in all things weather-related. There were some interesting workouts. And, the UN-Canceled Project treated me to three (count 'em, three!) virtual races, all with unique race day attributes.


But, before I get too serious with all the details, welcome to the Weekly Run Down!

I love hosting this link-up with Deborah (from Confessions of a Mother Runner)! If you write a fitness-based blog, you're invited to join the party. The link-up opens at 1:00 (EST) on Sundays and remains open through noon on Monday. We love reading about everyone's weekly fitness endeavors, training highlights (or low lights) and race recaps. We ask that you link back to both hosts, and we encourage you to read/comment on the other linked blogs as well...please don't link-drop & dash ;-)
Here's what went down in my little world of fitness this week:

Monday - How about a double dose of sweat, with a windy 5K time trial as a bonus?
Our weather over Easter weekend had turned rather cold, damp and windy, and that continued through to Monday. With the dreary outdoor elements, I opted for 20 minutes on the elliptical and some upper-body strength for the morning. 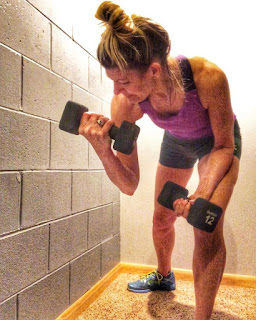 After work, the temps had warmed slightly, and the sun had emerged, but the wind was even stronger. In keeping with my (current) Monday 5K time trial gig, I got dressed and headed to the "race course." The plan was a mere three loops of this 1-mile loop around the college campus. There was a massive wind out of the west (my app said 18mph, but the gusts were anywhere between 20-30mph). Suffice it to say battling the headwind was brutal. Even the cross wind was tricky; it kept making my legs want to "criss-cross." And the tail wind? Although I was able to let loose and run with much freedom, the strong tailwind made me feel like I was attempting to sprint DOWN a very steep hill....a little freaky because I didn't feel like I had 100% control. So, any hopes of PR'ing this week's 5K were null and void. At least I could laugh about the ridiculousness of it all.
Tuesday - Maybe we're due for a recovery day?
Monday's 5K time trial wasn't one of my better 5K attempts, but I certainly ran it with a lot more effort than what the finish time reflected. Battling the wind is no easy jaunt. Come Tuesday, it was time for some down-low recovery...20 minutes on elliptical served me well.
Wednesday - Is that snow?
There had been a "chance"of overnight snow, but I never looked out the window. Imagine my surprise to see more than just a dusting of the white stuff on the ground when I headed out for my #5at5 with Barb. Not only was there snow on the ground, but intermittent black ice on the streets! Neither of us took any tumbles, but there was plenty of slipping and sliding as we navigated our way through the fog. Thankfully, all the snow was gone within a few hours.
Thursday - Shall we jump-start the day?
Having had my jump-roping interests peaked (the week prior), I wrote up a similar interval workout...this one encompassing core work.

My initial plan was to do three sets, but (oops) I bailed after two sets because my energy tanked after 30 minutes. Also, my rope is older than our marriage, and kept twisting under my feet and snagging my flopping pony tail while in the air. So, yes, a bit of humble pie for breakfast, but a few laughs amidst the frustrations. But, there was a decent upper-body workout in the evening!
Friday - ...wait, is that even more snow?
We'd been under a winter storm advisory Thursday evening, with "some" snow in the forecast (never mind the fact that we are almost a full month into Spring). I had planned on doing some power walking with Milly (not socially distanced, just saying), so I (again) had not bothered to peak out the window...until I was positioned on the treadmill. Ugh! I decided the best ammunition for fighting my annoyance was to sneak in one last post-workout outdoor selfie. And the 5-6 inches of snow? It was history by late morning.
Saturday - Surely, not more wind?
I had 13.1 miles on tap, for the UN-Canceled Humor Half Marathon.Yes, there was wind, and chilly temps. There also was plenty of sunshine, thankfully, so I never felt cold. I mapped out a simple 5K route (that went by my house) with plans of running it one way out, then back around (in reverse). Doing this twice would net about 20K (12.4 miles). There would be a brief fueling/hydration pit stop at my house in between each 10K segment, as well as a few extra out-and-backs (on the in-town portion) to get to the 13.1 distance.

Only...the wind continued to get stronger (a big part of my route was on an open county road, with no buildings or trees for wind shelter). The hubby's Ipod Shuffle kept shuffling to Jimmy Buffet and James Taylor (neither of which I want for running mojo). Then, my Garmin putzed out around the 9.5-mile mark (on said county road). Instead of looping back out, I decided to run the remaining (3 or so?) miles in town, on a different 5K route. With the extra out-and-backs, I wasn't quite sure where my actual distance was (but estimated it to be around 10.5 miles). I probably ran at least 13.5 miles, possibly 14 total, but that will remain a mystery. Alas, there was much laughter at all ALL things...the wind, the hills, the Garmin (or lack there of)...but my hilly route did mimic the Drake Relays Road Races 13.1, which this virtual race replaced. So, all is well.
Sunday - Can you feel the sunshine?
The morning greeted me with bright sunshine (and a little remaining wind LOL), and a body that felt almost brand new. I had done a lot of stretching and foam rolling, so any residual after-effects from the windy 13.1 were (mostly) null and void. None the less, I did the routine recovery run (two miles) and felt even better upon returning home. Max took the hubby and I for a 2-mile walk afterwards. 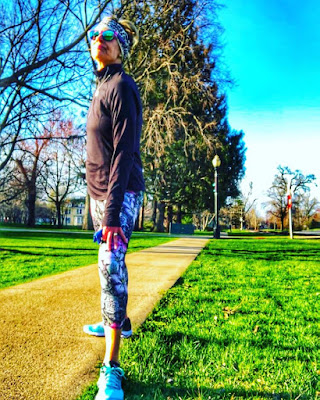 So how did the week play out? Running totaled out with 24ish miles. Walking had nine miles (with more to come later on Sunday). Two elliptical sessions (40 cumulative minutes). Two upper-body workouts. And one jump rope/core interval HIIT extravaganza. Feeling good, feeling fine!

In case you missed out, here's what went down on the blog this week:
Up Close and Personal
HIIT'ing at Home

In other news:
Friday Fashion Flair! How do you feel about denim jackets? They've been around longer than me, and are a wardrobe staple for many. Ironically, they can dress up a casual outfit or tone down a dressy one. And, they make for a great layering piece on a chilly morning. I have an affection for dragonflies (I know, #shocker). This funky brooch caught my eye, several years ago, and found its permanent  home on my jacket. As always, you're welcome to join me on Fridays...post a pic on Instagram, grab the hashtag (#FridayFashionFlair) and be sure to tag me (@runningonthefly).
Just a week ago, my magnolia tree was on the verge of blooming. This week, though, two snowfalls wreaked havoc. All the buds are now looking forlorn. Maybe the outer petals will reveal signs of life underneath...but I'm not betting the farm (if I had one LOL) on it.
You may have noticed there was a lot of orange going on this week, due to the UN-Canceled Project's three virtual races. Humor was this week's theme, as was the color orange...so I played along and wore the requisite orange gear. As mentioned, all three of these "races" presented me with unique challenges, due to the race day conditions (thanks to the weather). One thing we have ZERO control of is the weather, right? And, most of us would still choose to run an actual race on its actual race day, no matter the weather. We do have 100% control of our attitude, though. A little humor can make a big difference in one's race day experience, real or virtual. 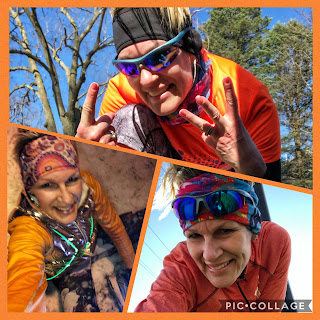 Anyways, enough about me!

Tell me something that made you laugh (or at least smile) this week.  Crazy weather? Any virtual racing? Staying active? I hope everyone is staying safe!

You are invited to the Inlinkz link party!
Click here to enter
Posted by Kim at Running on the Fly at 10:07 AM