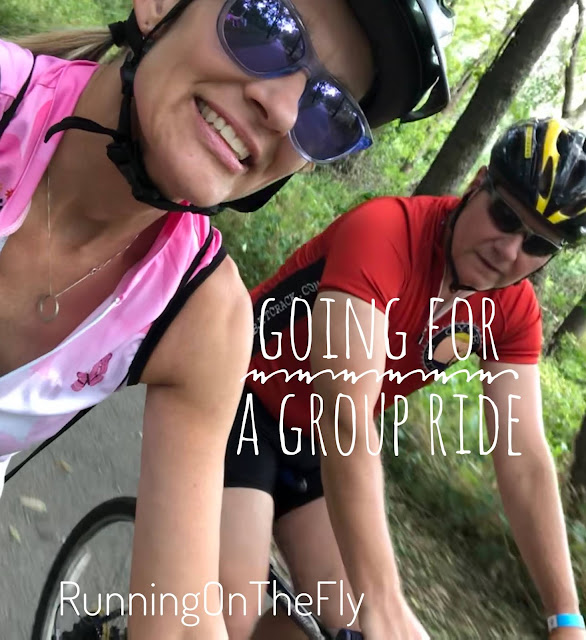 There's a first time for everything, and this was a fun endeavor for this first-timer.

I'm talking biking here, specifically group bike riding. Only this was more than just a group ride...there was food and drink, and plenty of door prizes. Several friends were in tow. And there were a whole lot of laughs along the way.

The date was Saturday, August 22nd and the event was the Bicycle Brew BBQ. Now in its fourth year, this event featured two options in distance along the Gay Lea Wilson Trail. The route started at the Brick House Fitness site (the host of the event) in Bondurant and rode to Des Moines (with a layover of sorts, at a golf club) and then back.

We'd had this ride on the calendar for over a month or so, and were looking forward to an afternoon of riding with some of our friends. The hubby has been on many rides before,  but this was my first-ever experience riding with more than a few people at a time.

Then, the (supposed/suspected) stress fracture entered my world. I won't go into a lot of details on this post, but suffice it to say it was a definite curve ball thrown in my direction at a rather inopportune time.

The good news? The area in question (second metatarsal on my right foot, near the base of my first little toe) was in a fairly low-risk spot for feeling any impact or strain from pedaling. I taped the area securely (for compression), and cautiously kept the middle of my foot (instead of the "ball" of my foot) positioned over the pedal. I wore a good pair of supportive running shoes (because I don't do clip-ins LOL), which ensured limited (if any) movement.

So, how did that work for me? In a word...Perfection! There was absolutely no pain or strain in the affected area of my foot. The route was pretty flat, so there wasn't any hard pedaling. Also, I kept my bike in low gear, so there wasn't any unnecessary resistance. These were all tips and suggestions I'd gotten from fellow cyclists who had successfully biked while healing from similar stress fractures.

There were maybe 200 (?) registered participants, but I have no idea how many actually were there. They did allow some day-of registrations. There was COVID protocol in force, and all did a great job in keeping spaced from one another.

I was a bit concerned it would be crowded on the trail, but that was never the case. Similar to a runners'  road race, after the first 1/2 mile or so, everyone was spread out safely along the trail.

Unlike a runners' road race, though, this was very non-competitive. Many riders were in groups, and would veer off the trail for a snack (or drink) break.

We rode for about 15 miles, and made it to the turn-around spot (the golf club), and hung out for a good hour. I'm not sure the golfers were too appreciative of all the cyclists invading their patio, but we did keep things cool and quiet (well, somewhat LOL).

We'd had a little bit of a head wind on the ride out, so we were anticipating an even easier jaunt back to our starting place. The temps were warm (upper 80F's), but with the breeze it never felt uncomfortable. Although there was intermittent shade cover, we also had quite a bit of cloud cover as well.

A result of the recent derecho (August 10th), there downed trees and numerous branches, leaves and debris. Thankfully, there were many volunteers who did an excellent job in getting the trail cleared prior to the ride.

Our total ride time was around 2 hours, 45 minutes. My bike computer showed just a hair under 30 total miles ridden for the day.

And, the best part? Nothing felt any worse for the wear. In fact, I was overjoyed that I hadn't felt any discomfort the entire day. For the afternoon, I was able to forget about the stress fracture completely. 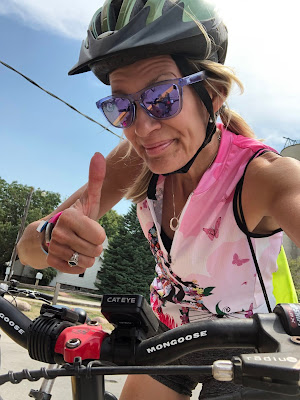 We hung around for an hour or so, enjoyed some BBQ, live music and time with friends. We all agreed that this was a fun and well-organized event. With my sabbatical from all things weight-bearing (running/walking/elliptical/stair-climbing) for the next 5-6 weeks (at the minimum), I'm looking forward to doing more biking. If we can find more group rides, such as this, all the better.

**Not all stress fractures are like mine; I got very lucky in that mine is located in relatively "low-maintenance" spot.

**Even though my affected area feels alright for the time being, I am still playing it safe. In other words, there will not be long 30-mile rides, such as this, happening on the regular. I only took a chance on this ride because it was an out-and-back route, so I could turn around at any time if I needed to bail.

**Although I can ride my bike with said stress fracture, I have to do it carefully. No crazy hills or speeds, only easy gears, constant vigilance as to how my foot is on the pedal, etc.

So, that's my first group ride! I was pleasantly surprised to see how friendly fellow cyclists could be (after all, I'd heard many stories to the contrary). The non-competitive (and social) aspect of this ride was especially appealing. Like I said, I'm eager to do another!

Have you ever done a group ride similar to this? Would you consider doing one?