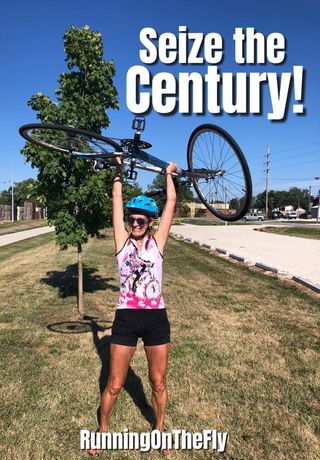 I came. I rode. I conquered. But I didn't do it alone.

As most know, my love for cycling has exploded in recent years. Last summer, I got the wild notion of doing a century ride (and so did a few of my friends). After all, I had ridden 88 miles (and change) in late July, for RAGBRAI. Surely an extra 12 miles weren't very far out of reach.

After almost a year of talking, scheming, and a lot more biking, my first 100-mile ride came to fruition on Wednesday, July 27th.

As mentioned, I didn't do this alone.
While I do a lot of my cycling solo, I also log many miles and long rides with some of my friends. We've known Mike and Amy ever since moving to Grinnell, 20 years ago. Amy often does the weekly rides on the hilly bike path with me, and on occasion we run together. Her and Mike go on a lot of long rides with us on the weekends. And, most of you know Barb, who does a lot of running, racing, walking, and (in general) conversing with me.
All of us were intrigued with the notion of riding 100 miles. We weren't able to make it happen last year, so we were determined to get it done this year.
We met at my house at 5:40 in the morning, loaded the bikes onto Mike's truck, and pulled out of my driveway before 6:00. We arrived in Adel just after 7:00, got the bikes unloaded and all our gear in place, and set out on the Raccoon River Valley Trail just before 7:30.
I tried to utilize my new Garmin Forerunner 255, because I thought all the stats would be fun to "ooh and ahh" over afterwards, but I couldn't get the bike mode to work (I'm still very much in the learning mode with all the bells and whistles of this new wrist candy, LOL). I did have my bike computer, though, so that would do. Crisis adverted. Onward!

Our first (brief) stop was in Linden. With just over an hour into our ride, we'd gone 14.71 miles this far. Since the Raccoon River Valley Trail is a rail trail, there are numerous  stops along the way, many of which are former train stations. We took a few minutes to walk a bit and stretch the legs, and we were back on the trail not much longer afterwards. 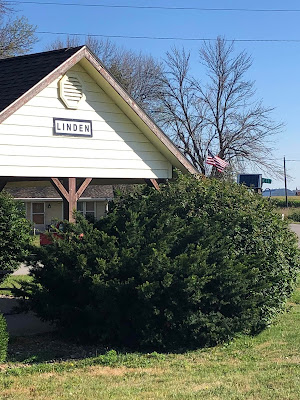 The temps were perfect. We're talking 70F, with a very gentle breeze out of the northwest.  The humidity felt balmy, but with the cooler temps, it was comfortable.

Our next stop was in Yale, around 9:30. By then, we'd ridden 26.31 miles. I took the opportunity to eat a couple of peanut butter and raspberry jam rice cakes (since my quick breakfast of oatmeal had been almost four hours prior and I was feeling hungry). 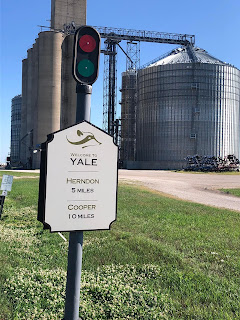 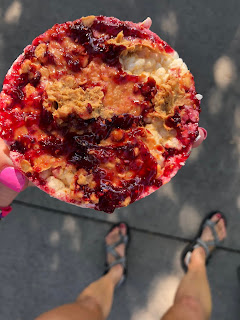 About an hour later (and 36.70 miles in), we stopped in Cooper, and  took advantage of the (dirty) restroom. Ick! 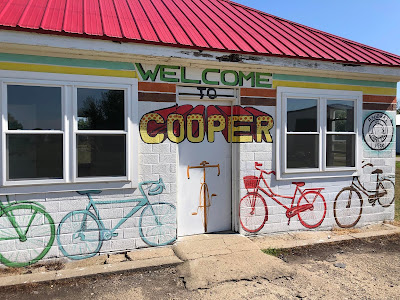 The trek from Cooper to Jefferson was rough! A lot of ridges and rough spots on the trail made for a bumpy ride. Also, this part of the trail was probably the most challenging of the day since it was a steady incline. We arrived in Jefferson just after 11:00 and made our way to the town square to get a photo by the famous bell tower. With 44.54 miles done, thus far, we were excited to be approaching the halfway point of our century ride! 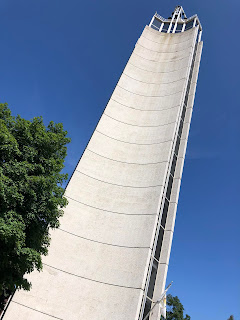 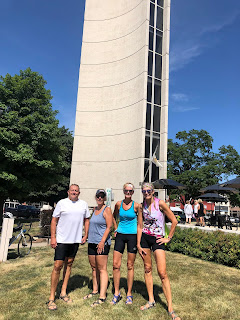 After Jefferson, we had to double back to Cooper to take the east leg of the trail to Jamaica. We arrived back in Cooper with 52 miles logged.

There were numerous mulberry trees, still full of berries, along much of the trail. I finally caved, and grabbed a few just before arriving in Jamaica. 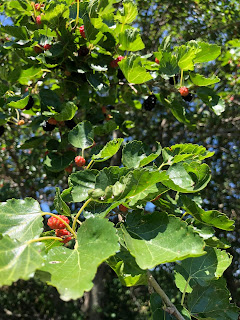 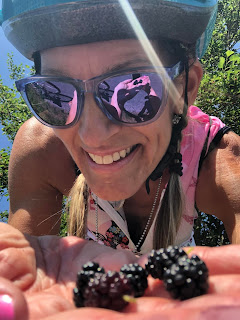 We pulled into Jamaica just after 12:30, and we were hungry! We grabbed lunch at the Just One More bar, right along the trail. With 59.76 miles done, we'd officially passed the halfway mark. 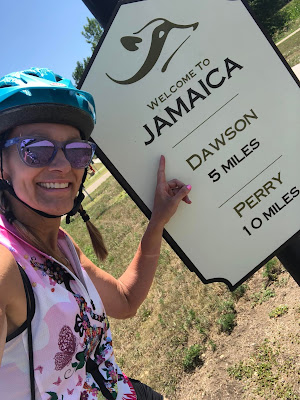 Back on the trail, after lunch, we rode for another 45 minutes or so. We'd ridden 70.33 miles when we pulled into Perry, just before 2:00. We took another quick "dismount and stretch the legs" break. 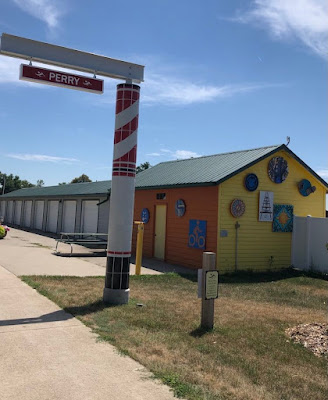 It was just after 2:30 when we pulled into Minburn, with 77.65 miles done. We paused for a refueling break (of sorts) at Nineteen14. 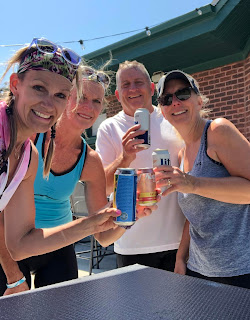 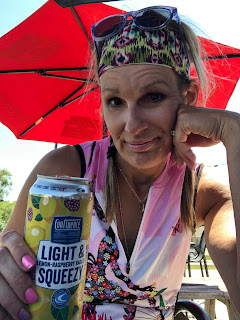 About an hour later, we arrived at our final stop along the route, in Dallas Center. We grabbed another round of drinks (Pepsi and chips for me, LOL) at the Handlebar. 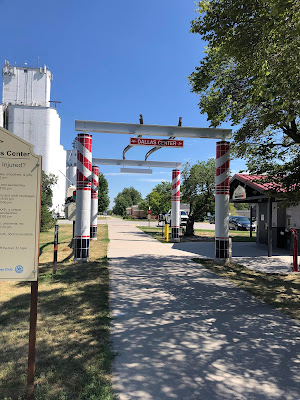 And, of course, there has to be a photo opp at the Big Red Chair, on the way out of town. 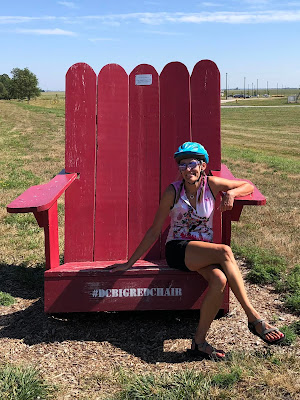 It was around 4:00 when we got back on the trail, out of Dallas Center. At that point, my bike computer showed  83.66 miles completed, and I was feeling good. Like, really good. I had a serious endorphin buzz going! 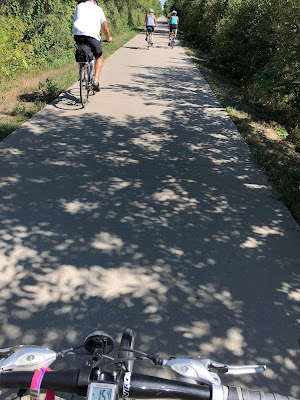 We'd rounded the curve, through Waukee, and were headed back to Adel when I noticed my computer showed 93 miles. What's so special about 93 miles? Well, it's equivalent to 150K, that's all. 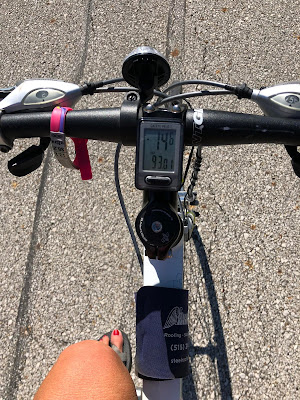 Those last 10 miles into Adel were just crazy. We were back on an incline, and we had the northwest breeze back in our faces, but my energy was bonkers. Barb and I were riding side-by-side, and both of us were high-pedaling in the excitement of just about being at that 100-mile mark. 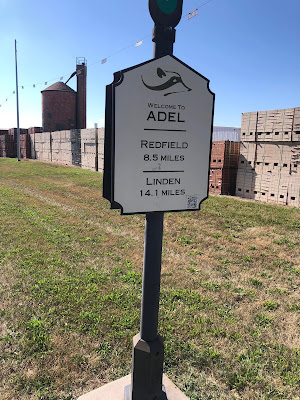 We arrived back at Mike's truck, with 97 miles showing on the computer.  Amy, Barb, and myself continued on...doing an endorphin-engulfed 1.5-mile out-and-back. When we returned, Mike was cheering and clapping for us. Whew!!! We'd done it!!! 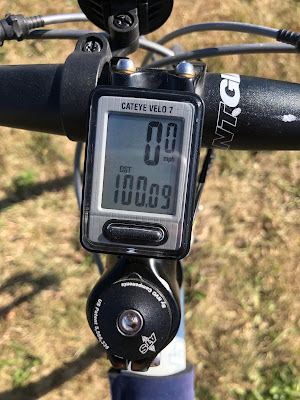 We celebrated at the Brickyard (sports bar, right off the trail in Adel), after our 100-mile conquest. 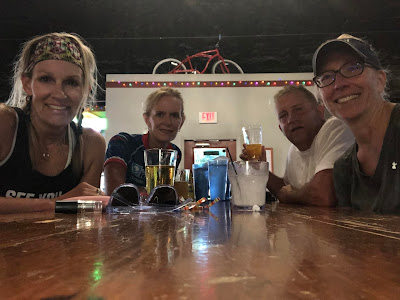 So yeah. This was quite a feat, and one that I'm quite proud of. Honestly, it's an endeavor I never would have imagined myself doing just a few years ago. Although that stress fracture (August of 2020) took away my running and walking for a few months, it ushered me right onto the seat of my bike and into the world of cycling. I'm ever so grateful!

A few key points and observations about this ride:
**I would tentatively compare a century ride (for cyclists) to a marathon (for runners). It's a potential  bucket list undertaking that may entice some but not appeal to others.
**Amazingly, I never once felt any fatigue. My day started with a 4:50AM wake-up and there was almost non-stop action until we were in the truck, on the way home, around 7:00 that evening.
**I had two bottles of water on the bike, one of which had electrolytes mixed in. I drank mostly water in the first few hours, but alternated with the electrolytes thereafter. I had to refill both after lunch.
**Since this was a rail trail, it was pretty level for the most part. In other words, no crazy hills to climb, but that means almost constant pedaling (since there are no hills to coast down).
**From about mile 70 and on, my energy seemed to take on a life of its own, especially in the final 10-12 miles. Obviously, there were some crazy endorphins at play...is there such a thing as "cyclist's high?"
**My bike computer showed our actual time biking was 7 hours, 24 minutes and our average speed was 13.5 mph
**Taking on these 100 miles was a big conquest, but I never felt intimidated by it. It made me realize how much I take my fitness for granted, and how grateful I am that I can do things such as these.
**The next morning, my triceps were the most achy of everything. My shoulders and upper back/neck were a bit cranky at wakeup, but felt fine after a couple hours. And the bum, and the legs? Nothing ;-) Everything from the waist-down felt like nothing had happened the day prior. I was totally good with that! 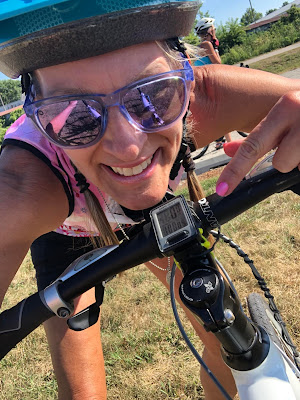 And that's the rest of the story. A long day in the saddle, but also a fun day with friends. I'm ready to take on another century ride...just not for awhile. I definitely could see myself doing one (or a few) every year.

Do you use cycling as means of cross-training? If so, what's the farthest distance you've ridden? Have you ever considered doing a century ride? 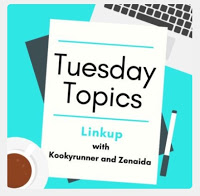