Another Trail Run.....'Down' for the Count 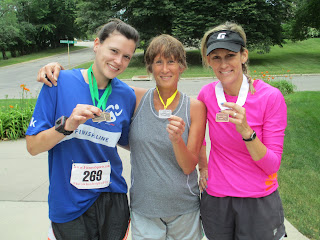 I really think I could grow to love trail runs.  Maybe not as much as half marathons, but I definitely can see more of them in my future. Just not any time in the next few days or weeks.

The Grimes Farm Trail Run took place on Saturday, July 13th, and I was an eager participant.  The Grimes Family Farm is located just west of Marshalltown, in central Iowa.  Every year, the Grimes family hosts a series of race events: 5K, 8K, 1.6 mile, and kids' races. All races take place on the trails on the land owned by the conservatory.

Along with the race bib, participants received a tech shirt, draw-string sport bag and a pin oak seedling (as well as numerous refreshments following the races).  I brought along the camera, but forgot it in the car.  And that is a big regret.  The trails were beautiful and very well-maintained. 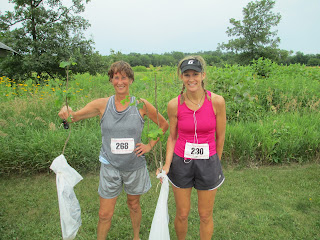 I ran the 8K trail run with my friend, Linda.  Her daughter, Dani, also came along.  Dani was a very well-decorated high school runner in track and cross country (State of Iowa champion, none-the-less).  It's great fun to watch her go, but I am thankful she's in a much younger age group so I don't have to "compete" with her. 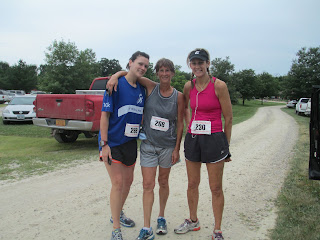 The 5K and 8K share the majority of the same trail, except for a one mile out and back leg (for the two additional miles on the 8K course).  As I mentioned, the trails were beautiful.  There was one major hill, shortly after the start, that was very long and challenging.  About 2/3 of the way up the hill, there is a lookout tower, with a volunteer waiting at the top to mark the hands of runners who take on this "bonus" climb (they get a special reward for doing so).  The tower has three sets of stairs that lead to the top, similar to climbing three stories of a building.  I love stair-climbing, so I decided to take on this extra quest as well.

I made my way to the top of the tower and back down in a couple of minutes.  I realized this would alter my actual finish time, but the challenge was there and I knew I would regret not doing it.  All or nothing! 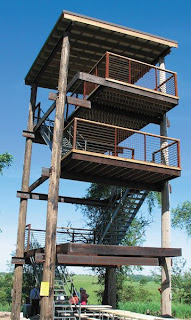 After descending the tower and finishing the remainder of the big hill, the rest of the trail was pretty flat and not too threatening.  I did notice some initial stiffness from my old friend, the piriformis.  Whenever I do races with hills (especially if the hills are right at the start of a race), I almost always have some issues with piriformis stiffness.  I stretch before the event, but none-the-less, this is just an ongoing thing for me.  It is getting better, but it still exists (probably to keep me humble).

I did slow down and walk a few times, to give my legs a break.  There were some water stations, so it all worked out.  I can barely walk and chew gum.....trying to run and drink is like taking a shower in public for me, so I usually have to walk through the water stations anyways.

I felt like I was running the first half a little slow, but with the big hill and stair climb I knew my pace would be a little off.  Not to worry.  I usually can pull off a negative split in most events, so I don't let myself get in a panic.

Eventually, I reached the turnoff for the 8K runners.  This part of the course was well maintained, but we were warned it would be a little rougher that the other trail.....and they were correct!  There also were a lot of twists and turns, which made for a very scenic journey.  I was probably halfway to the turnaround when I started to see the lead runners coming back.  I love cheering on fellow runners, so I always clap or tell them "Good job!" or "Looking great!"

I had just cheered for a returning runner, and the very next moment I was flat on the ground.  And I went down hard.  Even with the grass on the trail, the ground was very dry and compact...and unforgiving.  I didn't just fall and scrape my left knee, I also did a (very ungraceful) roll.  As soon as I pulled myself back up (Mr.Returning Runner chose to leave me in his dust), I could tell something wasn't right.  I could feel some pain near my rib cage.  I had heard that if you break a bone, you will KNOW you've broken a bone. I didn't feel anything too outrageous, so I pressed onward.

But my rib cage hurt.  It continued to hurt for the remaining 2 miles or so that I had left.  It didn't hurt to breathe, so I was certain my lungs weren't injured.  But every time I twisted  or leaned into a curve, I could feel something in my rib cage area.  Despite this discomfort, I was actually doing great with my pace.

I made my way to the turnaround, and back out to the main trail for the final 3/4 mile of the race. I had gone through so many turns and curves, I had lost my bearings.  So, I was pleasantly surprised to see the finish line so soon.  I was able to up my pace, and finished the 8K in 51:40.

Running trails is very different than running on pavement.  The grass and uneven terrain require a slightly slower pace as you navigate the course.  There are numerous times when you think you have solid footing, only to hit a patch of gravel or dirt and then need to shift your balance to remain vertical.  I am kind of a klutz by nature, so I probably look like a comedy act as I attempt to keep my composure when my feet are slipping and sliding in opposite directions. I read somewhere that your trail pace may be 1-2 minutes slower (per minute), depending on the variables (slope of terrain, thickness of grass, obstacles, etc.), so my finish time is decent for me.  Given the fact that I "detoured "on the tower climb, walked a few times and then tumbled .....I am happy and satisfied with my effort. 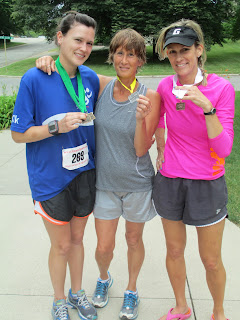 They were very generous with their awards.  All the kids received medals for completing their races.  They had awards for not only runners (in the various age divisions), but for the walkers as well.  Dani was the fastest overall female in the 5K, so she received a cash prize and medal, and also a first place medal for her age division. Linda and myself both placed in our age division (in the 8K), receiving 2nd and 3rd medals respectively.  For those who did the bonus tower climb, they had a big selection of t-shirts from past years and first-aid kits to choose from.  I already have too many shirts from races, so I opted for a first-aid kit.  I thought that was a nice touch!

I thought this race was a great event.  We were blessed with optimal weather (70-degree temps, low humidity and plenty of cloud cover).  Numerous volunteers were there to make sure all the details were covered. Plenty of awards for the participants.  The trails were beautiful...another reminder that I need to vary my running and not always be on the pavement for my training. 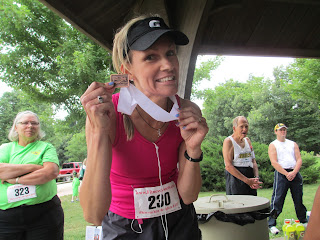 My rib cage is sore, but manageable.  I suspect I may have bruised or cracked a rib (or two) on my fall.  I did a quick search on the computer upon returning home, and discovered there isn't much that can be done for injured ribs other than rest.  My breathing is fine, just some overall discomfort if I bend over or twist or turn too quickly.  I didn't feel my discomfort required a trip to the ER, so I will wait  it out a few days and stay out of my running shoes in the mean time.  Will that keep me from ever trail running again?  Absolutely not! 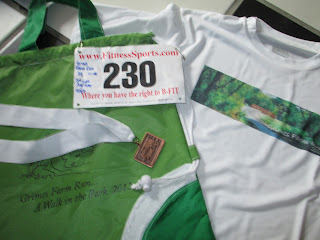