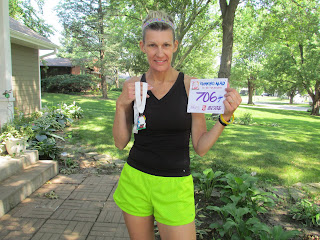 Ever done a virtual race?  I've done a few....some 5K's, a couple 10K's, and now I have officially completed two virtual half marathons. 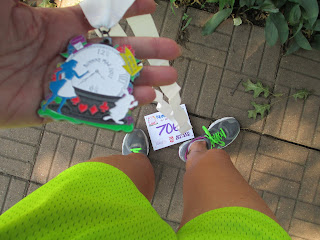 A year ago, I did the Moms RUN This Town summer virtual event, the Hot Momma.  It was a half marathon distance, but we were given the entire month of July to complete it.  We also had the option to run it in increments, or all in one shot.  Having done several halfs, I elected to do the "all in one shot."  I was very proud of myself, getting up early on a hot summer morning, and venturing out for 13.1 miles...all on my own.

Fast-forward to Saturday morning (July 6th), and I did another virtual half marathon, also sponsored by Moms RUN This Town.  This year the theme was Running Mad, based off of the Disney classic story of Alice in Wonderland.  And, this year we had the option of running a 5K, 10K or a half marathon.  Of course, I elected to do the half.....I know I can run the distance, why not do it for some hardware (the registration fee includes a finisher's medal)?  Besides, since I know I can do a half marathon, I would feel guilty getting a medal for running anything shorter if I had the half marathon as an option.

I'm currently in training for my first-ever full marathon, so this distance fit nicely in my training schedule.  My most recent long run was 10 miles, a week prior.  Technically, I was scheduled for 11-12 miles this weekend, but I have more than two months until my marathon, so I have some flexibility.  Running the 13.1 miles  was a jump in distance, but that is what happens when I train for a half anyways (I train up to 10 miles, recover and  run the race a week later).  I will just scale back next weekend, allow some recovery time, and resume the mile increases after that.  Nothing to worry about.

I headed out around 6:30 in the morning to tackle the run.  What makes a virtual race neat is that it's a race you run on your own schedule.  You don't have to travel to a special location, or run it on any specific date.  You do have to complete it, though, on your own.  That can be difficult if you rely on the crowd support and energy amongst the fellow runners to get you excited for the run. Most virtuals (if you've paid a registration fee) will have you report your finish time, making you eligible for prizes.

I was eager to do this run.  I had been looking forward to it all week.  I was hoping to maybe set a new PR, but I also knew I just needed to focus on the run itself and not be all consumed with my finish time and/or speed.  After all, the LSD's (long slow distance runs) are about endurance, not speed.

It was a struggle for the first 5 miles or so.  I didn't have any pain, but did have some stiffness in my piriformis area.  UGH!  It has improved, but is still bothersome at times.  I had some great tunes pop up on the Ipod, though, so I was able to keep a smile on my face and press on through the minimal discomfort.

Our town hosts a half marathon race, and the course goes right by my house.  It's a double loop course, so I ran one loop and stopped back at my house for a brief water gulp and energy gel fix.  As soon as I headed back out to tackle the remaining loop, I felt instantly better.  I could already tell my pace was a little faster.  I did the first loop in 1:06, not an ideal split for me (almost 10 minutes slower than normal), so I could tell something had not been right.  I felt like I was almost running in slow motion for the first loop, I was thankful this second loop was going better.

I felt really good until around mile 10.  It was then that I started feeling a little light headed, nothing major or scary, but it was there and I was aware of it.  I also was feeling thirsty and a little fatigued.  I knew the final couple miles were going to be a good test of my determination, but they had to be finished so I pressed on.

I ran the first loop of the course "clock-wise," and ran the second loop in reverse to make it more interesting.  I also varied some of the streets, trying to be careful to keep the distance accurate in doing so (I do not like doing the same thing all the time...I crave variety!).  In switching up some of the streets, I think my light-headed state may have misjudged the distance...it's quite possible I may have ran a little extra distance by accident.  No big deal. I'd rather run too far and know I did go at least 13.1 miles, than run it too short.

So, the last couple miles kept me challenged.  Nothing painful, but a little frustrating.  I did slow down and walk a few times, but was able to finish strong.  When I reached the 13.1 distance, and stopped my watch and walked a few blocks to cool down...I walked very slowly. By this time, it was after 8:30 and the sun had climbed high enough in the sky to make the temps a little uncomfortable.

I was able to run the second loop 2 minutes faster, even with the walk breaks, for a finish time of 2::10:19 (just under a 10-minute pace).  Even though I am capable of finishing a half marathon a good 10-15 minutes faster, that is still a decent time.  All is good, I am satisfied.  I refuse to dwell on the "what-if's" and feel bad about it.  I ran 13.1 miles, and I am thankful for having the ability to do so.  Not every run has to be a "race." 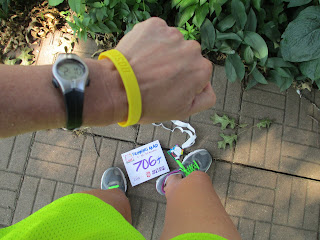 So, what did this teach me?  Well, it reaffirmed my love for the 13.1 distance.  I think I may have had a carb-crash, probably from not eating enough prior to running (I had some oatmeal, but maybe should have had something else with it).  I didn't take any water with me, so I was probably a little dehydrated.  Normally, I have a chai latte' each morning...and I didn't have any before running, so  there was a caffeine deficit situation going on, too.  I have a little runner girl necklace I wear for all my events and long training runs, and somehow forgot to wear it, maybe that's also a factor (LOL).  All of these are things that I can fix. This was a training run, after all, and that's why runners do them...to figure out what works and what needs tweaking. 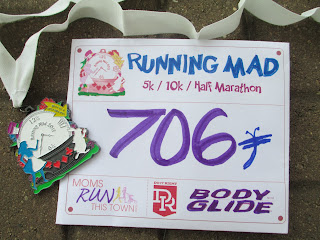 Also, there were no blisters this time!  I typically don't get blisters on training runs, but often notice them when I do the long races themselves.  This virtual half served as kind of a milestone (no pun intended) for my marathon training.  Most of my long runs from here on will be longer than the half marathon distance, so there may be some blisters (and lost toe nails) in my future....but those are part of the package.  I will be running 26.2 miles in a couple months...if that didn't come with a few challenges (or blood, sweat or tears), it wouldn't be a significant accomplishment.
Posted by Kim at Running on the Fly at 8:35 AM